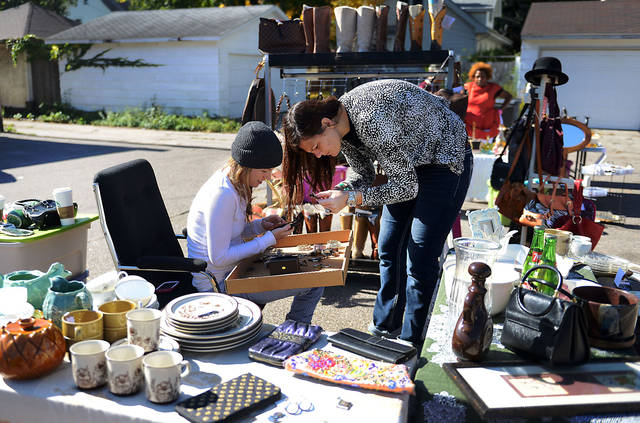 Sellers at Flamingo's Divine Finds in Minneapolis do business on Sunday at a seasonal flea market. Outdoor markets like this have finally been legalized in the last year. (Photo by Juliet Farmer)

Anthony Shane’s shop on Cedar Avenue features treasures like vintage troll dolls and mounted deer antlers, but he said his favorite items to collect are unique clocks because they remind him of his grandmother.

Shane has owned Flamingos Divine Finds, an “occasional sale” shop, for four years. It now features flea markets once a month after the City Council lifted a nearly 60-year ban on them last spring.

Flamingos and the Cabooze Music Club were the only two businesses in Minneapolis to apply for and be granted flea market licenses this summer despite the recent legalization, said Patrick Hilden, a city district supervisor for business licensing.

“It was kind of surprising and a little disappointing because we heard so many people who were interested,” he said.

Businesses may not have had enough time to prepare for this season or maybe were unaware of the new ordinance, Hilden said.

At the flea markets, vendors display and sell items ranging from antique plates and paintings to prom dresses and purses.

“Our thoughts are that it will probably be bigger next year,” he said.

Shane said businesses and sellers may have been put off by the high licensing fee, which could cost up to about $1,000 depending on the number of vendors participating in the flea market.

“That’s one thing I wasn’t happy about with the ordinance,” Shane said. “But that’s the price of doing business, I guess.”

Shane decided to challenge the original city ordinance last spring after getting a “verbal warning” from city officials for operating a flea market in 2010.

“Up until then, I didn’t know it was illegal,” he said.

After the mishap, Shane reached out to Ward 9 City Councilman Gary Schiff to try to legalize flea markets in the city.

Schiff presented the proposal to the full council in April, and after it passed committee hearings with ease, council members voted unanimously to lift the ban.

Within its first hours of opening, he said, some of his favorite clocks had already been sold.

Shane said flea markets corner a “different part of the market” of vintage and thrift shoppers.

“We’re finding a lot of younger thrifty hipsters who are starting to come in,” Shane said. “They’re loving the vintage stuff.”

Ally Beattie, a vendor at Sunday’s flea market, said she’s been collecting vintage “treasures” from estate auctions, thrift stores and other sellers for most of her life.

Beattie, a stay-at-home mother, said collecting is “a way of life” for her, though she started selling her finds only two years ago.

Her flea market shop featured items ranging from pre-owned leather bags and boots to unopened 7-Up glass bottles from the 1970s.

Robertson said she stumbled upon Flamingos a year ago after “just driving by” and has since consistently visited the shop because of its low prices on unique items.

Shane said he likes to call his business a “recycle market” because collectors can salvage items that would otherwise end up in landfills.

“It’s where you can buy items a little cheaper than what we have in the store, things that are a little more in the rough,” he said.

Flamingos averages about 75 new customers a month and has about 3,000 participants on an email list, Shane said.

To attract more people to the flea markets next year, he said he hopes to get food trucks to come by.

“It’s taking a while for people to understand the concept, but I think next year will be better,” Shane said.

With more costumers, he’ll have to part with some of his favorite finds on a more frequent basis.

“I have about 35 clocks right now,” he said. “It’s tough, but I have to start slowly letting them go.”