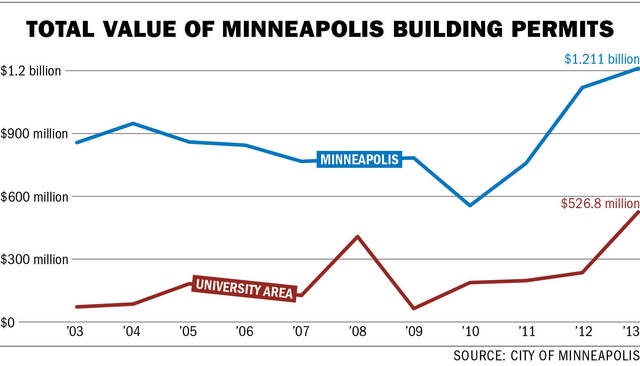 The city approved nearly $526.8 million in building permits for the University area in 2013, about eight times more than a decade ago. City officials expect the uptick in permit value to keep increasing.

Some say urban population growth can be good news, but an area’s character and the city’s comprehensive plan can be at risk if development is misguided.

According to city data, many neighborhoods in the University and downtown areas have each gained at least 500 residents between 2000 and 2010 — more than any other part of the city.

Pierson said development along transit corridors in the Marcy-Holmes area is encouraging, but building elsewhere could interfere with the neighborhood’s unique character.

She said the intersection of Fourth Street Southeast and 14th Avenue Southeast in Dinkytown, for example, is a “crossroads of culture, of commerce and community” and should be protected.

Permits approved last year in the University’s area included developments like The Bridges, The Marshall and the Venue at Dinkytown apartment projects.

Although the market could change by next year, he said, another billion-dollar year of permit valuation wouldn’t be surprising.

Besides protecting a neighborhood’s culture, Tucker said it’s important for development to fit in with the city’s broader goals, like remaining sustainable.

Population growth benefits the city, said Doug Kress, director of development services for Minneapolis, by increasing the tax base, for example.

“[Growth] helps us compete with Dallas and Denver,” she said.

A ‘golden age of cities’

But rental apartments have been driving the construction market for the last few years, pointing to an urban migration trend, Hanson Willis said.

Instead of a push to live in the suburbs like in past decades, he said, more people want to live in cities.

“We are capturing a lot of that population shift,” Hanson Willis said. “I think this next century is going to be a golden age of cities.”

Click here to view an interactive map of housing permits.