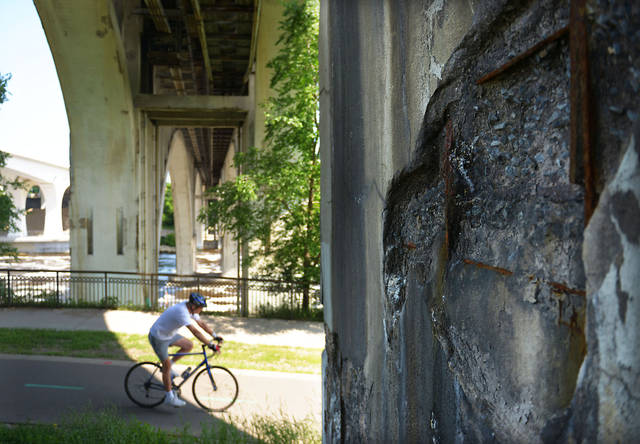 The 10th Avenue bridge exposes reinforcement steel and concrete on Tuesday, June 2, 2013. The city is currently working on a $12.5 million rehabilitation project for the bridge that was built more than 80 years ago. (Photo by Jaak Jensen)

A main artery between the East and West Banks of the University of Minnesota campus will undergo a multimillion dollar renovation project next year.

The Minneapolis City Council approved last week a nearly $12.5 million request to renovate the 10th Avenue Southeast Bridge, which was last updated more than a decade ago.

Meseret Wolana, a city engineer, said the bridge’s main issue is its arches, adding that steel reinforcements are exposed beneath the bridge deck.

The Mississippi River is eroding some of the concrete, Wolana said, giving the bridge significant wear and tear.

“It is getting to that point where it needs to be rehabbed,” he said.

Federal and city money will fund the project, along with state bridge bonds.

Minneapolis officials have known the bridge needed repair since as early as 2009.

A city report from that year recommended various repairs for the bridge — which was built in 1929 and is on the National Register of Historic Places — for structural reasons and to maintain its historical integrity.

“I think that has encouraged us to do a better job,” he said.

A 2012 report from the Minnesota Department of Transportation found the 10th Avenue Bridge’s structure was in fair condition, with “deterioration” and “extensive corrosion.”

Many concrete structural elements were rated even lower, according to MnDOT bridge inspector Pete Wilson, meaning repairs are necessary.

Gordon said the Council’s rationale is to fix the bridge now instead of waiting until it needs to be replaced, which would cost much more.

“It’s definitely been on the city’s radar for a while,” he said.

The city is in the process of awarding the design contract to SRF Consulting, a firm based in Plymouth, Minn., which will begin its work this month.

Construction work will start next summer and should be complete by summer 2015. City officials are not yet sure when and how extensive road closures could be.