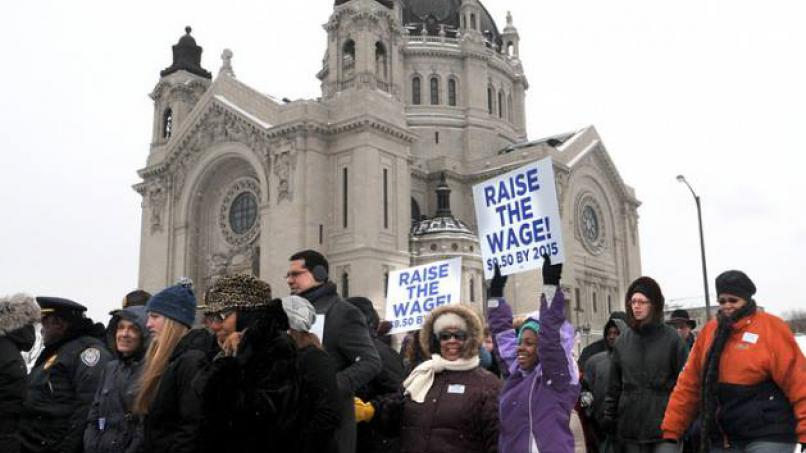 Pressure to raise the minimum wage has been building on state legislators. (Photo courtesy of raisethewagemn.org)

Supporters of an increase in Minnesota’s minimum wage are objecting to Senate Majority Leader Tom Bakk’s proposal that lawmakers put the issue on the November ballot, instead of acting to raise the wage during the current legislative session.

On Wednesday, Bakk proposed a bill calling on voters to decide whether to add an amendment to the Minnesota Constitution for a $10 minimum wage, indexed to go up with inflation.

Peggy Flanagan, executive director of the Children’s Defense Fund Minnesota and a co-chair of the Raise the Wage Coalition, said the coalition opposes “legislating by constitutional amendment” and wants immediate action to improve the lives of low-wage workers and their families.

“Minnesota’s working families have waited long enough,” Flanagan said in a statement issued by the coalition. “It’s time to pass a minimum wage bill of at least $9.50, indexed for inflation so we can catch up and keep up.

“This coalition does not support legislating by constitutional amendment. Minnesotans elected legislators to govern. Minimum wage is a legislative issue, not a constitutional one.

“By passing a minimum wage bill that catches up to at least $9.50 and keeps up by indexing future increases to inflation, lawmakers can keep politics out of the minimum wage once and for all. A ballot campaign would do the exact opposite.

“Low-wage workers shouldn’t have to wait for a November ballot campaign to determine whether the minimum wage catches up and keeps up. By passing a minimum wage bill in the Legislature, workers will begin seeing their pay go up in August and in every following year.”

More than 350,000 Minnesotans would benefit from an increase in the minimum wage, according to a report by the JOBS NOW Coalition. More than $470 million would be pumped annually into Minnesota’s economy, the group said.