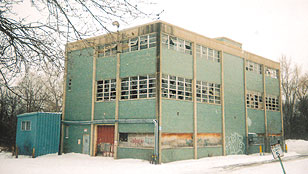 Photo by Dick Saunders Shattered windows and graffiti illustrate the decrepit condition of one of the 11 buildings on the campus of the onetime Twin Cities Research Center of the Bureau of Mines that will be torn down in the coming year as part of the redevelopment of the 27 acres into a park-ready condition by the National Park Service. The parcel, lying east of Hwy. 55 at East 56th Sreet, will become part of the Mississippi National River and Recreation Area (MNRRA).

The U. S. Interior Department has given the green light to conversion of the 27-acre former Bureau of Mines Research Center into an open space or park for public use by the National Park Service.

The decision, ann-ounced Jan. 20, concludes a four-year process of public review for the sale, renovation or disposal of the 11 decaying Mines Research Center buildings, abandoned in 1996 when Congress closed the Bureau.

Coldwater Spring, the last natural spring in Hennepin County and a gathering site for Native and public groups for more than 200 years, will be preserved in a form yet to be determined.

Under the Interior Department’s preferred alternative, the 11 buildings will be removed and the site “returned to more natural conditions” later in 2010. It will be managed as a unit by the Park Service’s St. Paul office as part of the Mississippi National River and Recreation Area (MNRRA).

The open space/park alternative “best meets national environmental Cultural and historical interests will be addressed under the National Historic Preservation Act during the forthcoming planning phase.

Early public reaction to the NPS decision was positive. “Coldwater Park, as it was named on local maps from the 1880s to 1950, will be returned to the ‘open green space’ envisioned by former Congressman Martin Sabo in a 2003 appropriation to determine future land use of the Mississippi bluff property lying south of Minnehaha Park along Hwy. 55,” noted Susu Jeffrey of Friends of Coldwater.
“Friends of Coldwater will now press for expansion of park property to include unofficial surrounding parkland for one contiguous urban wilderness-ostensibly of savanna oaks and prairie grass-from the top of the bluff to the Mississippi,” she said.

No funding is expected for the demolition phase until the federal fiscal year beginning Oct. 1, 2010, an NPS official told Southside Pride.
The full text of the record of decision is available on the MNRRA website: http://www.nps.gov/miss/parkmgmt/bomcurr.htm. Paper copies are available by calling NPS offices at 651-290-3030, ext. 250 or by leaving an e-mail request at miss_info@nps.gov.