Angella Hanson and her son Douglas sip tea and nibble on pastries Thursday at Lady Elegant’s Tea Room and Gift Shoppe in Milton Square. Hanson brought her son to the tea room to celebrate his ninth birthday. (Photos by Marisa Wojcik)

Milton Square in St. Anthony Park is more than a century old, but the area’s residents have made it a well-kept secret over the years.

Serving as a cornerstone of the St. Anthony neighborhood, Milton Square is located at the intersection of Como Avenue and Carter Avenue.

Here, several businesses spring up in the middle of a pocket of houses bordered by the University of Minnesota’s St. Paul campus to the east and Minnesota State Highway 280 to the west.

Although business tenants have changed over the years, two of the square’s independent shops, Muffuletta restaurant and Micawber’s Books are celebrating milestone anniversaries this year.

‘The land that time forgot’

Heather O’Malley, Milton’s daughter, said her mom was a trendsetter for her time.

“Most moms did not work in the ’50s at all,” she said. “She was kind of a pioneer for women working.”

Milton said she went to law school so she wouldn’t feel intimidated by men in the industry. She owned her own realtor business and was active in several neighborhood committees and community boards, all while raising three children.

Milton, 91, has since sold all of her other properties, but the charm of Milton Square has kept it in the family. Although her daughter now manages the property, Milton still comes to the office twice a week to check up on business and visit with neighbors.

Milton moved her office into one of the square’s small retail spots, and the area became a home away from home for her three children.

“We were basically raised over here. This was sort of our day care,” O’Malley said.

Although the “secret garden” courtyard and small nooks scattered throughout the square became second nature for O’Malley, to the rest of the city, the area has remained relatively unknown, she said.

Thomas Bielenberg, who co-owns Micawber’s Books, said the neighborhood is “sort of the land that time forgot.”

Maggie Manteuffel, a part-time University business administration master’s student, said as an undergraduate student living near the East Bank, she had never heard of Milton Square. She discovered it when she moved in to the neighborhood with her fiancé as a graduate student.

“We just wanted a change of pace,” she said. “Once we moved in, we realized pretty much everything we needed is within walking distance, which is really nice.”

O’Malley said she has friends who went to school on the St. Paul campus three blocks away that didn’t know the area existed.

The fortunate people who have discovered the quaint area are happy to share their “little slice of life”, O’Malley said, but they also covet the tranquility of their “unfound treasure.”

“It’s sort of a fine line when all of a sudden too many people know about it,” she said. 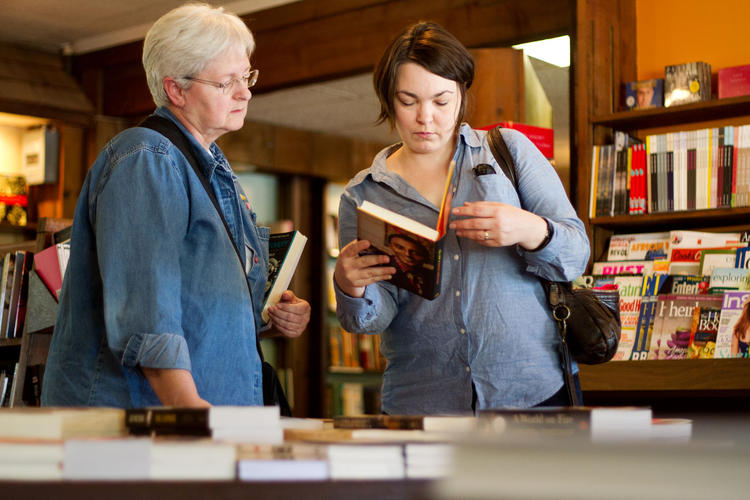 Judi Steltzner, left, and her daughter Gretchen Funk browse books Saturday afternoon at Micawber’s Books in St. Paul. The bookstore is part of the “destination shops” located in Milton Square.

Where the professors hang out

Neighborhood residents comprise the majority of customers on a daily basis. Older establishments, like Muffuletta and Micawber’s draw in many people from all over the Twin Cities.

Pete Mihajlov and Phil Roberts opened Muffuletta in Milton Square in 1977. It was the first in a series of restaurants they would eventually open and manage under Parasole Restaurant Holdings.

Parasole Vice President of Marketing Kip Clayton said Muffuletta has been a popular hangout for University professors, grad students and their families for generations.

Clayton said professor of neuroscience Glenn Giesler is one of Muffuletta’s longtime customers.

Giesler said a lot of people from the St. Paul campus dine there because of its close proximity.

“I’ve just had a lot of wonderful meals there over the years,” Giesler said. “I think it’s one of the places people count on for a good meal.”

Another business favored by professors is Micawber’s.

Bielenberg said they don’t get a lot of students, but many professors live in the neighborhood and like to browse the store, which allows Micawber’s to carry more scholarly or academic titles.

“They like it because it’s not connected to what they’re doing at the University,” Bielenberg said.

The store also caters to the younger families in the area.

“Our customers don’t expect to find every book here, and we don’t have several hundred thousand titles,” he said. “But people come here because they know that the owners are here.

Norton Stillman, founder and previous owner of Micawber’s, opened the store in 1972. In 2003 he sold Micawber’s to Bielenberg and his business partner Hans Weyandt.

Bielenberg and Weyandt worked at Hungry Mind bookstore in St. Paul and decided to go in to business together.

“I’ve never met anyone who planned on becoming a bookseller. It just sort of happens,” Weyandt said.

Just the way she bought it

Bielenberg said the neighborhood is really supportive of its businesses and that Milton Square is a great “incubator location” for new companies.

O’Malley said the smaller, artisan businesses that are coming back in to style would fit in the square because of its nontraditional setting.

She added that, with the exception of minor renovations and necessary remodeling, her mother wants to keep the atmosphere the way it was when she bought it.

“I think she wants it to just continue on in the same way,” O’Malley said. “This has always been her favorite property.” 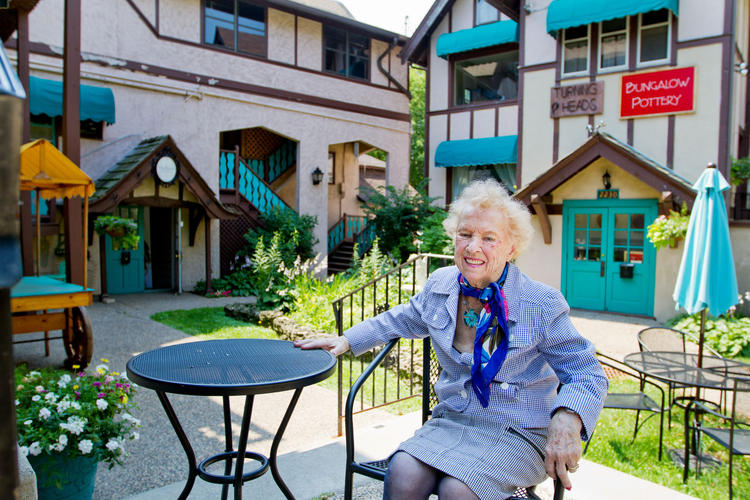 Mary Ann Milton , owner of Milton Investment Company, sits in the courtyard of Milton Square on Monday in St. Anthony Park in St. Paul. Milton bought the property in 1957 and has since been the owner and developer.