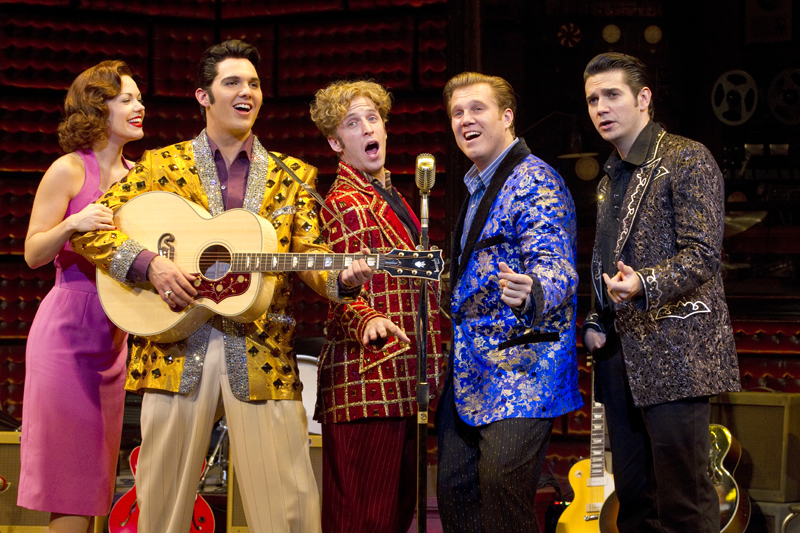 Million Dollar Quartet isn’t your run-of-the-mill revue. Granted, it doesn’t have much of a book, but, by the time the evening’s over you don’t mind. At all.

About a half-century ago, four artists who would have an everlasting impact on popular music—Johnny Cash, Carl Perkins, Elvis Presley, and Jerry Lee Lewis—found themselves up, mostly by chance (it never happened again), in the same recording studio at the same time.  Cash had become a name with the hits “I Walk The Line” and “Folsom Prison Blues,” but was nowhere near huge as he’d eventually become. The snakebit Perkins was trying to shake a long run of bad luck. The worst of it had been that on his way to New York to promote his promising record “Blue Suede Shoes” he got hospitalized by a car crash and saw Presley cover the song, skyrocketing up the charts with it as a runaway hit. Presley, phenomenally successful, was just crossing over to movies, emerging as a music superstar to rival the likes of Frank Sinatra and Dean Martin. Jerry Lee Lewis was a rookie nobody knew from Adam’s housecat. Those, we know, are the facts. The four of them got together for an impromptu session at Sam Phillips’s Sun Records, where Cash, Perkins, and Presley had launched their careers and Lewis hoped to get his off the ground.

The rest of Million Dollar Quartet may or may not have taken place exactly as it did in the script, but it is plausible. According to this story, Presley is there because fame is messing with his head and he needs Sun owner-producer Phillips to work with him at RCA Records in New York. Cash and Perkins are summoned because Phillips plans to renew Cash’s recording contract and has Perkins on hand to both help celebrate the re-signing and record with the new artist, Lewis. Problem is, Cash has already decided to jump ship and join Columbia Records soon as his Sun contract expires. Ultimately, it turns out Cash’s departure isn’t the only bad news Phillips is in for.

The performances by Derek Keeling, Lee Ferris, Cody Slaughter, and Martin Kaye, with Christopher Ryan Grant, are wonderful. Keeling sounds so much like Johnny Cash, right down to the depths of his rich baritone, it is eerie. Ferris plays fiery guitar and sings rockabilly with all the authority of Carl Perkins who, in fact, is remembered and revered as the Father of Rockabilly. Cody Slaughter convinces as Presley, complete with jack-legged dancing. Martin Kaye is absolutely marvelous as the rookie Jerry Lewis, playing hell out of the piano, doubling as comic relief to play an upstart pain in the ass who aggravates Perkins and Phillips, by turns, into offering to take him out in the alley and tear him a brand new one. Christopher Ryan Grant in the role of Sam Phillips works in fine, authoritative counterpoint to these idiosyncratic creative types and, while Keeling, Ferris, Slaughter and Kaye naturally are center stage, Grant holds everything together.

Million Dollar Quartet, a fascinating history lesson and incredibly enjoyable experience, is one of those shows that, after hearing your friends go on forever about how great it was, you could just kick yourself for missing.

Photo by Joan Marcus, courtesy Hennepin Theatre Trust. Coverage of issues and events affecting Central Corridor communities is funded in part by a grant from the Central Corridor Collaborative.