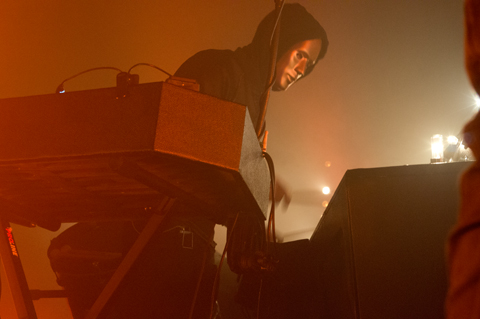 Miike Snow had First Avenue attendees dancing their way through a sweaty spectrum of elation during their hour-plus set on Tuesday, October 16. The Swedish-American indie group stopped in Minneapolis in the midst of their American tour promoting their 2012 album Happy to You.

The famously mispronounced Miike Snow (it’s actually “Mee-kay Snow”) is comprised of the Swedish beatmaking deities Bloodshy and Avant (their resume boasts penning hits for Britney Spears, Madonna, Kylie Minogue and pretty much every Top 40 hottie that’s ever dated John Mayer) along with American musician/producer Andrew Wyatt as lead singer. Although they have a had a bit more success on the European charts, Miike Snow’s first album, fittingly titled Miike Snow, gained a huge indie following for its combination of head-thumping club tracks and slower trance- jams, all laced with Wyatt’s angelic vocals.

Being the pre-show band Googler that I am, I wasn’t surprised when Miike Snow came out sporting their trademark (plastic?) masks. Thankfully they ditched them after the first song, just as I was starting to wonder how they were going to make it through their extremely dancie (and therefore sweaty) set looking like vigilantes.

They made their way through some of the more popular titles from Happy to You before exposing the audience to their borderline dubstep wrath in “Pretender.” The dance nature of Miike Snow’s music fit perfectly with the fog-heavy spaceship vibe their stage setup was exuding. If anything, Miike Snow has made the point that you don’t have to sit on a stool playing your acoustic guitar just because you’re indie songwriters. “Sylvia,” another show highlight, followed in the excited wake of “Pretender” and turned into a 10 minute electro jam session. I’ve never seen so much rhythmic-swaying-with-one’s-eyes-closed! Needless to say, they had us where they wanted us.

The audience got wild yet again for the old favorite “Black and Blue” before the band rounded out their set with “Paddling Out” and a couple others from their newer album. After a brief exit which fooled no one, Miike Snow returned for “Sans Soleil” and a larger than life rendition of their biggest hit “Animal.” Although Wyatt admitted he wasn’t feeling quite up to par (whilst sipping hot tea, no less), Miike Snow delivered some serious bass in our face. And heart. And lungs. Pretty much all over, actually.