The St. Cloud State University students beat out several other nominees in the division. “We are pretty excited,” said Thielman at the Emmy pre-show event at Seven restaurant. “We were all happy because we put a lot of work in it. The Schiefelbeins are friends of mine and I wanted to do something cool to recognize the farms of Minnesota.”

Thielman and her crew brought in camera dollies and other film equipment to the farm. “We made sure we got the best angles and interviews possible. We wanted to submit it for awards,” she said. Thielman, a senior at St. Cloud majoring in Television Production, said she plans on heading to Chicago or New York City after graduation.

The Midwest Regional Emmys used to include the city of Chicago, but seceded to form the separate Upper Midwest chapter eleven years ago, said KARE 11 reporter and seven-time Emmy winner Allen Costantini at the post-party. “Chicago would get so mad at us, because Minnesota would bring home all the Emmys,” he said. The Upper Midwest media organizations are from Minnesota, North and South Dakota, Iowa, and western Wisconsin.

Entries made to the Upper Midwest Chapter were judged by panels assembled by other National Academy of Television Arts & Sciences chapters. 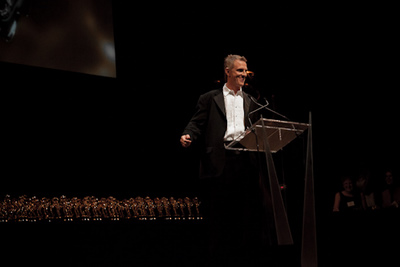 Eric Perkins (above) of KARE 11 television was the night’s master of ceremonies. Perkins, who told the audience he was “doing a no tie deal,” said there were 757 entries, 383 selected as nominees, and 130 Emmy statues awarded.

In the new Emmy category “Military,” the Minnesota National Guard’s The Red Bull Report was a 2010 nominee in the Program/Special/Series category. The Report is a series of weekly, two-minute videos produced by the 34th Red Bull Infantry Division and broadcast to 14,000 military personnel, said  Lt. Col. Kevin Olson, Director of Public Affairs. The videos are produced from south Iraq and feature various topics like Week 36’s edition “Iraqis get a handle on danger, [Camp] Basra lets the dogs out, and the 34th says farewell.”

The audience gave all the military Emmy nominees a standing ovation. In the end, the gold statue went to a KSTP-produced investigative report by Mark Albert titled “Who Killed Doc,” a story about the 2004 death of St. Paul native Navy Petty Officer David Cedergren in the showers at Camp Iskandariyah, Iraq.

In the Military category of Single Story/Feature, The Emmy went to the Star Tribune’s “Living Outside the Green Zone,” a multimedia video produced by McKenna Ewen and reported by Mark Brunswick that describes Andover native Staff Sgt. Ryan Hallberg’s injuries from a roadside bomb near Fallujah, Iraq.

In a departure from the National Academy of Television Arts & Sciences Awards, the Midwest Emmy recipients did not present live acceptance speeches. Instead, clips of their winning media were shown to the audience and winners were interviewed backstage, filmed for clips to be posted online.

To signify the trend of multimedia journalism, or the “backpack journalist,” two new Emmy categories emerged this year in Interactivity and Multimedia Compilation. The winners were “Minnesota Stories” by Star Tribune’s Richard Tsong-Taatarii and “Rubbed Out,” the interactive story on the 1945 murder of Minneapolis newspaper publisher Arthur Kasherman produced by McKenna Ewan and reported by Eli Shiffer.

The sports category nominees jumped 25% this year, with 40 nominees. The Feature/Human Interest Stories category received a record number of 53 nominations, and half of those came from local cable television shows. 40 entries were nominated in the Health/Science/Environmental category.

KARE 11’s Boyd Huppert won for On-Camera Talent-Reporter, General Assignment. The Sports Anchor Emmy went to KSTP’s Phil Aldridge, while the News Anchor Emmy went to WCCO’s Don Shelby. Shelby received a standing ovation when he accepted his award for “Good to Know” in the Editorial/Commentator category and delivered a short message to the audience.

You didn’t have to be in the big television markets to pull in the Emmy’s, however. The winner of the most statues went to KMSP/WFTC TV for productions ranging from Director Short Form (Chad Gilmour) to public service announcements (“No Channel Left Behind”).

Weather, of importance to many in the Midwest, also factored in the Awards with their own categories (Weathercast winner Jay Trobec, Chief Meteorologist at Sioux Fall’s KELO-TV) and segment wins (Twin Cities Public Television’s “Minnesota’s Deadliest Tornadoes” in the Historic/Cultural/Nostalgic category).

A heartwarming tribute was given to WCCO television reporter Darcy Pohland, who passed away this year. Confined to a wheelchair as the result of a diving accident, Pohland’s arms were in steel braces and she typed her news stories one key at a time using a little wooden stick. She was inducted into the Silver Circle, along with John Campbell of Cedar Rapids’ KCRG-TV9 and Michelle Lee of KDLH 3 in Duluth.

The recently let-go KARE 11 reporter Scott Goldberg won an Emmy for his Single Story titled “Holocaust Survivors: My Grandparents and Their Legacy” in the Historical/Cultural/Nostalgic category.

The Directors category was expanded to eight awards this year, as some directors handle an entire news show. The Director for Newscast Emmy went to Megan Osborn for News Channel 8 at 10, KCCI-TV, Des Moines.

The Governor’s Award went to the Lakeville Government Television, Lewis House, and the Lakeville Police Department, who have been working together for 30 years on domestic violence. 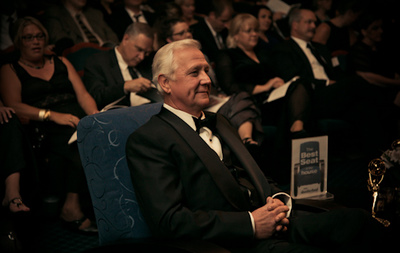 (Above) Don Shelby of WCCO was honored with two Emmys at the Midwest Regional Emmy Night Saturday. He sat in the “best seat in the house” at the Pantages Theater. 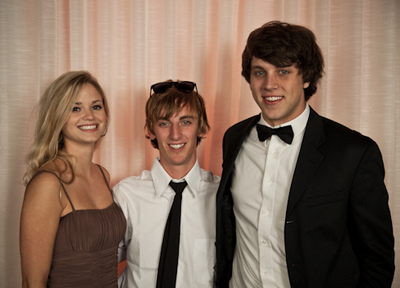 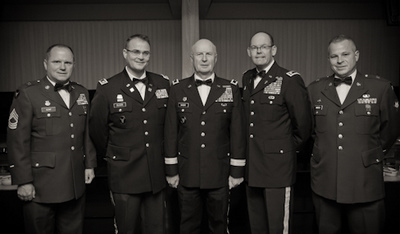 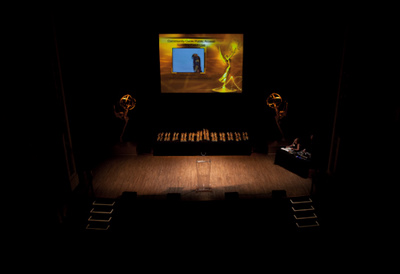 (Above) The Pantages Theatre in Minneapolis was the setting for the Midwest Regional Emmys Saturday night. 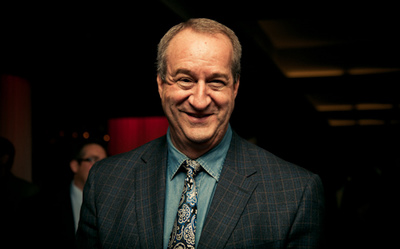 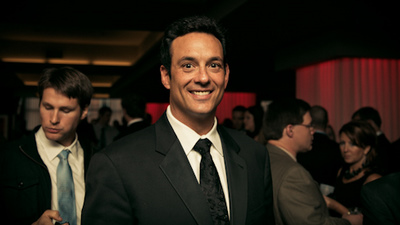 (Above) WCCO-TV anchor Frank Vascellaro at the Emmy pre-party at Seven. 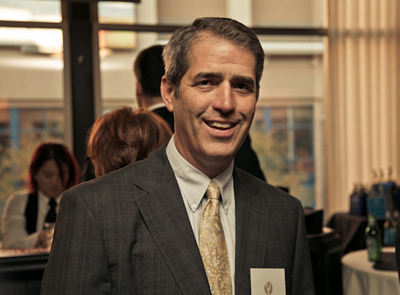 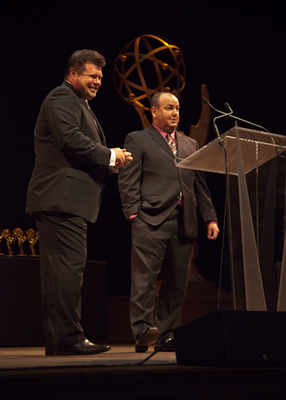 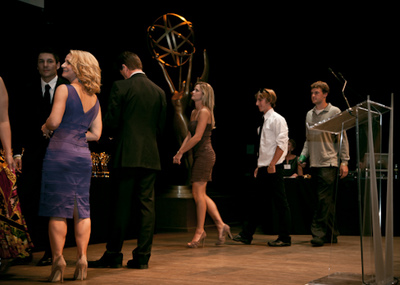 (Above) St. Cloud State University students come on stage to accept their Emmy for their documentary about a Minnesota beef farm. 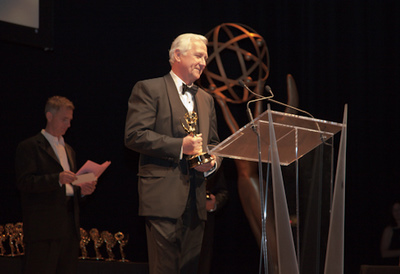 (Above) Don Shelby accepts his Emmy for his “Good To Know” in the Editiorial/Commentator category. The audience gave Shelby a standing ovation. 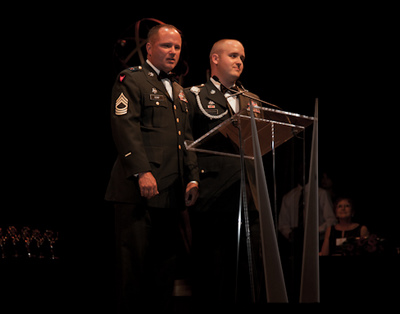 (Above) Soliders from the Red Bull division of the Minnesota National Guard Richard Kemp and Ben presented the Emmy for Stories from the War Zone/Home Front to “Who Killed Doc?” 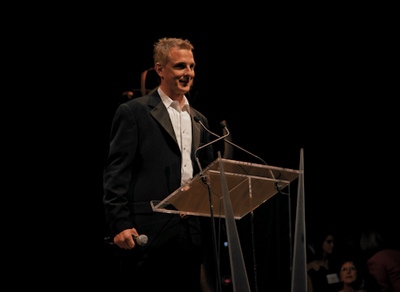 (Above) MC Eric Perkins said he wasn’t going to put on a tie for the evening’s festivities. 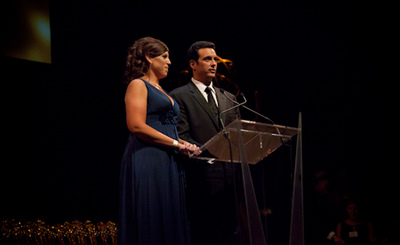 (Above) WCCO’s Frank Vascellaro and Bridget Schettler-Breen of Sioux City’s KTIV were presenters at the Midwest Emmy awards; both are married to news anchors at their stations. “We are both sleeping with someone at our jobs,” said Vascellaro. 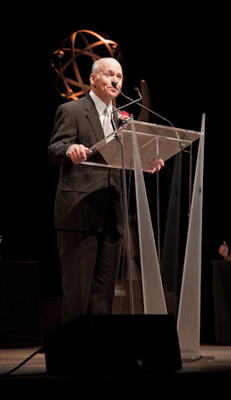