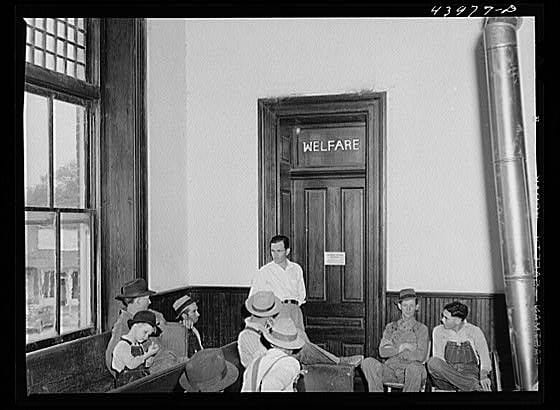 Welfare was the only source of income for many people during hte Great Depression. This photo of men waiting their turn at the welfare office in the courthouse in Franklin. Heard County, Georgia is from the Library of Congress. (Photo by Jack Delano)

When Bill Clinton signed the welfare reform bill of 1996 – ushering in the era of “welfare-to-work” – the State of Minnesota was already working on its own welfare reform. The reform limits the total number of months of benefits in a recipient’s lifetime. Fourteen years later, in the depths of a recession, how is that working out?

In 1998, after years of study and trials, the Minnesota Family Investment Program (MFIP) took effect. Administered by the Minnesota Department of Human Services (DHS), the program is intended to “help families work their way out of poverty by expecting, supporting and rewarding work,” according to a DHS fact sheet.

This is the first of a two articles about welfare-to-work in Minnesota. See Part 2 –  The families behind Minnesota’s MFIP numbers.

Like the federal law that guides it, MFIP expects families to transition from assistance to work, and it limits recipients to five years (60 months) of cash assistance. Participants may also receive non-cash assistance such as food support, childcare, and employment services.

The state program allows extensions and exceptions (months not counted toward the limit) to the federal 60-month rule for individuals facing certain hardships – like barriers to employment, illness, family violence, low IQ, and more – and for those meeting educational requirements.

In fact, only 210 of the 1,890 people who entered their fifth year of MFIP cash assistance in June 2001 (the first group to approach the limit under the new law) had their cases closed a year later, at the 60-month mark. In the month of December 2008, two-thirds of the MFIP cases that had reached the 60-month limit were still open due to extension.

In 2004, Minnesota introduced the Diversionary Work Program (DWP), in which eligible families spend four months seeking work – with the help of a job counselor and mandatory employment plan – before going on MFIP assistance. Benefits of the pre-MFIP program include cash for “critical needs,” Food Support, child care and health. And families can receive MFIP assistance even while they work their way out of poverty.

The state cites some success with extensions and the work program. According to DHS, 70 percent of DWP recipients were not receiving MFIP one year after leaving DWP. In December 2008, only one-third of the families receiving MFIP cash assistance had been on the program for more than 25 months.

Despite the extensions and employment assistance, Minnesotans have been bumped from the program due to the five-year rule. By December 2008, a total of 12,622 had reached their lifetime limit for MFIP cash assistance. Of them, 67 percent had had their cases closed, 21 percent were extended, and 12 percent remained active as child-only or food-only cases, or for other reasons.

On the other hand, since 2008 (the year that saw the fewest number of average monthly MFIP cases), the economy has plummeted, and MFIP participation is expected to rise to levels well above the previous peak, in 2003.