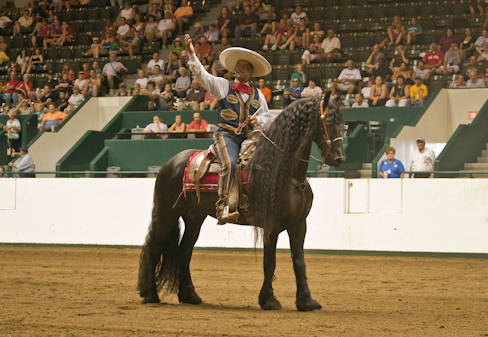 Gerardo “Jerry” Diaz is treated like a celebrity at the Minnesota State Fair. Diaz, a fourth-generation internationally famous charro, produces his own Mexican rodeo extravaganza and tours across America, Mexico and Canada bringing the Mexican tradition of the charro to audiences. He performs twice daily through the run of the State Fair.

Charros devote years teaching their horses maneuvers that “transcend mere mechanics and become magic for the crowd to witness,” says the State Fair horseshow guide. Indeed, Diaz is the “cover man” of the show guide and it promotes his performance on just about every page.

Diaz, from New Braunfels, Texas, is a five-time national champion charro (pronounced Cha’ro) and has a 150-year family tradition. His great grandfather was a charro in Spain and the tradition was carried on by his grandfather and father in Mexico.

“My dad Pepe, who is 91, called me and first asked how the horses were doing, before he asked how I was doing,” Diaz said with a laugh outside his trailer on the fairgrounds. 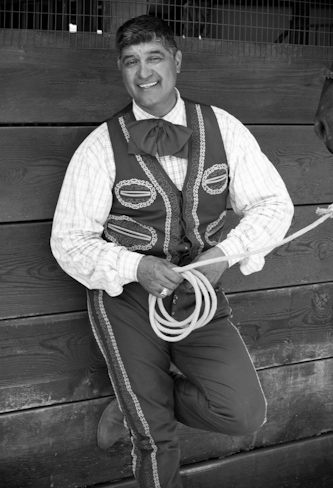 The Warner Coliseum was packed Monday to watch Diaz. He performs in traditional charro clothing, and combines Mexican mariachi music with precision roping maneuvers with his horses’ skills. The charro outfit is similar to the military outfit worn in the Mexican revolution including a 14-inch sombrero and silver-trimmed bolero jacket with tight trousers.

The Mexican Charro saddle is used only by the charro and Diaz’s saddle is hand-embroidered by his father from the fibers of the maguey cactus and has a silver inlay saddle horn. The horses dance, do tricks, and demonstrate reining skills.

Dressing like a charro is only half the act. There is also the “charro code.” That code has to come first and includes chivalry, high ethics, expert horsemanship, and dedication to family, all of which must “come from the heart.”  He likes working with children, rescuing horses, providing riding lessons, and raising his own horses on his ranch called Three Mile Creek.

Some of his traveling band of horses include Hollands, Appaloosas, and  Andalusians. Some horses live until 27 or 30 years old, according to Diaz. “But that’s like a 90-year-old man,” he said.

Two of his horses performed at the show, an eight -year-old black Friesian stallion and a saddle horse performing a Spanish Walk and Passage. The stallion is on Diaz’s tour for the first time and is a starter horse. “We are very proud of him,” he said.

Family is important to a Charro

“We have a wonderful life together with our horses. [Being a charro] is a lost art and we try to keep it up and conserve it and keep the family together. That is very important to us. The more we keep our family together the better. Now more than ever in this computer age.”

Diaz’ commitment to preserving the culture of the charro earned him a Federation of Charros’ Golden Spur Award for his contributions to the charro tradition.

He said he has relatives in Minnesota he will be visiting and then it is home for two weeks and then on to Kansas City. Nicolas attends private school in Texas but often joins his mom and dad on the road, bringing homework and all. “How many other children can get his opportunity? This is school in itself. It’s an important piece of our life. He has to go to the stalls and water, feed and take care of horses.” But Grandpa Pepe and Grandma Rosa help with his son on their Texas ranch when Diaz tours, he said. 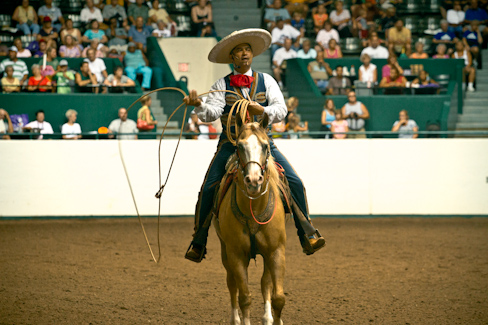 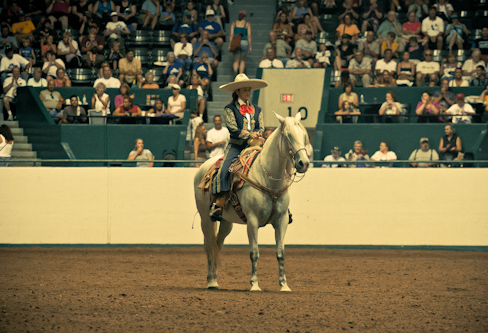 (Above) Staci Diaz, wife of Jerry, is a talented, third-generation rider and often joins the tour. Staci and her horse demonstrated a Spanish Walk and Passage Walk at the State Fair Monday. The couple’s six-year old son Nicolas also performs, making him a fifth-generation horseman. 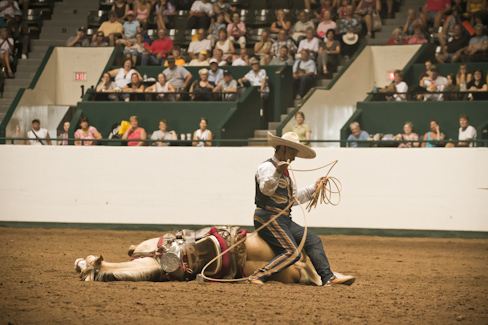 (Above) Charro Jerry Diaz performs horse tricks and rope skills at the Warner Coliseum at the Minnesota State Fair in the traditional charro way. 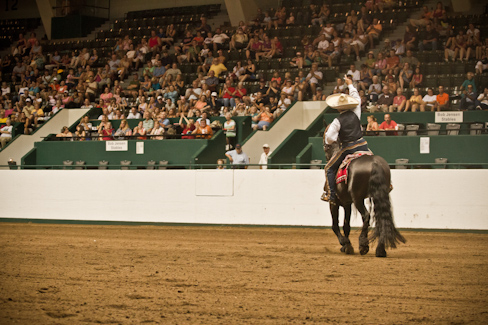 (Above) Charro Jerry Diaz waves to the State Fair crowd on his Friesian stallion. A charro wears an outfit based on the military outfit worn in the Mexican revolution, including a 14-inch sombrero and silver-trimmed bolero jacket. 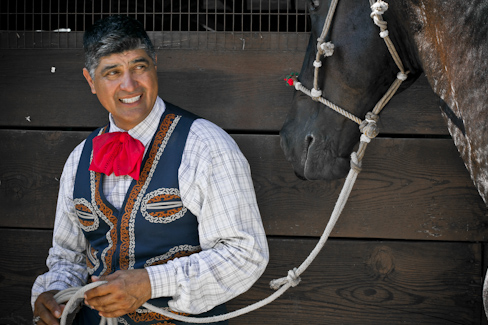 (Above) Diaz, of New Braunfels, Texas, relaxs outside his trailer  with one of his show horses at the Minnesota State Fair. He raises horses on his Three Mile Creek ranch. His commitment to preserving the culture of the charro earned him a Federation of Charros’ Golden Spur Award for his contributions to the Charro tradition, which he feels is becoming a “lost art.”