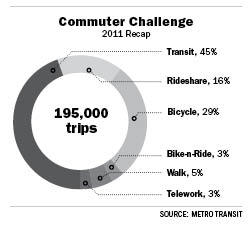 Kevin Jack calls himself a part-time driver. A resident of St. Paul, Minn., he often commutes to work by bus.

This year marks a decade since the program’s launch. Open to anyone living or working in the Twin Cities area, the program seeks to reduce road congestion and introduce new ways of commuting, said John Siqveland, Metro Transit spokesman.

Though almost 75 percent of 2011 participants chose to take the transit option or bike, Siqveland said some get creative with their commutes by using longboards, rollerblades or kayaks.

“It’s any way you can take any trip without riding alone,” he said.

Participants sign up by pledging to take the challenge and then tracking their daily commutes. Since 2010, Metro Transit has moved the sign-up process online. Before, the participants had no way of checking their progress. Now, they can track their trips and miles traveled and see how much fuel and CO2 emissions they have saved.

The online system also allows participants to continue tracking their commutes even after the challenge is finished. Participants who track throughout the year are entered into a monthly $50 gift card drawing.

In 2011, 17 percent of participants extended their challenge, Siqveland said. Post-challenge surveys show most people continue their new commuter behavior even if they don’t officially extend their pledge, he said.

Paul Hodges kept his pledge after entering for the first time last year. For him the challenge is ongoing.

Hodges, 40, lives in St. Paul and works in Bloomington, Minn. — a 20 to 30 minute commute via car. Originally Hodges wanted to bus, but was dismayed when he realized there were no convenient routes. So the challenge brought him into a new line of work: teleworking.

Instead of driving alone to his office every day, Hodges works from home two or three times a week. His employer, like many others, was very open to the idea, he said.

“It saves me an hour a day of commuting and about $3 a day in gas,” Hodges said. “And it’s nice because when I’m done with work, all I have to do is walk upstairs.”

Throughout the challenge, Metro Transit promotes their bus and train trips but also encourages people to partake in biking and ride sharing.

“There is no question that it positively impacts Metro Transit ridership,” Siqveland said. However, the online tracking system doesn’t have the ability to get a firm correlation between number of riders and the number of those taking the challenge.

The organization’s goal is to get more people involved with the challenge by going to employer fairs, the Living Green Expo and other events throughout the Twin Cities.

TMO holds a bike-walk week during the challenge, starting the first Thursday in June. During the week there are four free bike classes held Downtown that are open to everyone. The courses include how to bike safely in the city, basic mechanics, a guided ride on Nice Ride bikes and parking lot drills.