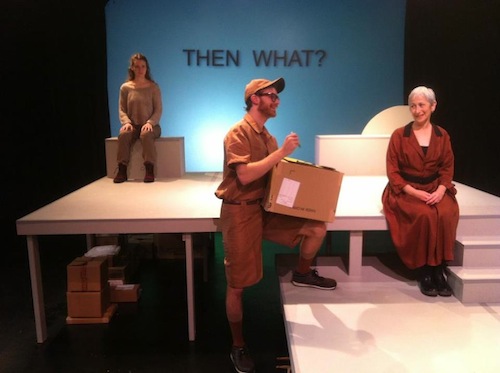 Meronymy is a new play by Rachel Jendrzejewski, the debut production of which opened last weekend at Red Eye Theater. A highly intellectual piece, it explores the concept of memory through the lens of architecture, where memories are literally stored in the attic, the basement, and other parts of the house. It’s a very tightly produced show, with great design work all around, direction by Steve Busa, and acting, although I’m not entirely sold on the script.

At the center of the pay is Jargon (Miriam Must), a character who seems to be losing her memory. Synechdoche (Ashley Rose Montondo), Abbreviation (Christian Bardin), and Rhyme (Candy Simmons) all appear other parts of her brain, negotiating amongst themselves what to do with different memories that are either in the “house” (which I took to mean Jargon’s brain) or are delivered by Etymology (the delivery boy, played by Joshua Allen).

I’m pretty unclear about how the figure of speech character names correlate with the characters themselves. Why is Etymology a delivery boy? Why is Abbreviation a 1950s southern belle housewife? I just don’t get it. Maybe I would understand it better after a second viewing.

I do get the idea that the architecture of the house is being used as a metaphor for memory, and that the different characters are stand-ins for the different ways our minds process information.

The most effective element of the production is the movement by Laura Holway, precisely executed by the cast. Each character has very specific energies and gestures, which are incorporated throughout the play, such as the way Candy Simmons’s character swishes her hips and enacts a rather elaborate sweeping and kicking dance every time she answers the door, or the way Ashley Rose Montondo floats across the stage, as if a great wind is blowing her from behind.

There are also highly choreographed sequences incorporated into the staging, where the cast enacts different rhythms and creates stage pictures and shapes with their bodies.

One thing I feel the script lacks is a way of drawing us into the story. The only character that you care about is Jargon, and while Must delivers a compelling and emotionally rich performance, there were times when I felt that she was acting alone. That has much more to do with the script and the abstract, intellectual nature of the show rather than the actors’ performances, but I did wish there were more entry points for engagement with the audience on an emotional level.

Read reviews of two other plays produced by Red Eye Theater and directed by Steve Busa: Maria/Stuart (reviewed by Sheila Regan) and Iris (reviewed by Matthew Everett), both 2010.