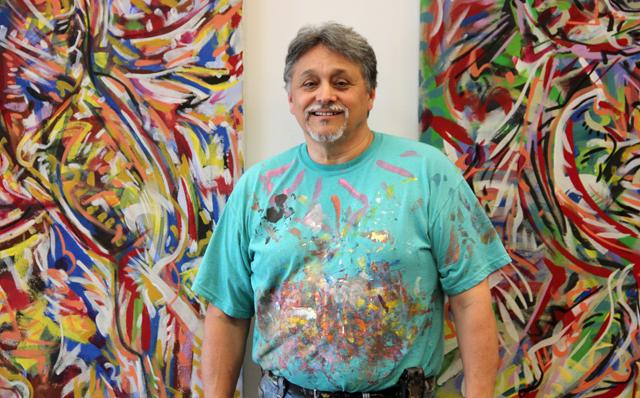 Chicano artist Jimmy Longoria wears his art. You see it in the paint dabbed and streaked artistically on his light blue t-shirt.

There’s a reason for that. Professional muralist and street artist both, Longoria uses the shirt to build community and further Mentoring Peace Through Art, a program he co-founded to help low- income and troubled Minneapolis teens toward better lives and to foil criminal activity.

To that end, Longoria helps kids create and paint complex murals on the blank sides of privately owned buildings (with the owners’ approval, of course) in Minneapolis neighborhoods with gang activity.

“What we do is use the lines found in nature and plants … Think of this as a huge, colorful camouflage field,’’ he says. When kids paint their gang script on these walls, it vanishes in a busy canvas of lines and bright colors in non-toxic paint, he says.

“…[W]e use art to defuse urban violence. We simply take away the walls from people who are using them to create sites to sell drugs, which leads to conflict between gangs,’’ says Longoria in this beautifully shot video by Shelby Fossell.

Some of those young artists are sentenced by the juvenile court to participate while others are there to gain job skills and work experience.

The program and Longoria are attracting attention and getting new funding. The nonprofit recently received a $100,000 grant of Minnesota Legacy funds from the Minnesota State Arts Board to expand the program and to pay staff salaries for the first time.

“Longoria’s inspirational art and mentoring work demonstrates how art, education and social justice can come together to help young people find their strengths and develop their skills,’’ says Heidi Barajas, executive director of the University of Minnesota’s Urban Research and Outreach Engagement Center (UROC’s), in announcing the artist’s work will be on display there through Sept. 15. A public reception will be held at 5 p.m. June 14 at UROC at 2001 Plymouth Ave. N. in Minneapolis.

Later this summer some young artists’ work will be displayed as well.

Longoria has spearheaded the creation of about 16 murals around town since 1990, though many have disappeared with redevelopment.

Those that remain include murals on four sides of Falconer’s Dry Cleaners at 1229 E. Lake St.. “It’s a building that’s been there forever and gangs had their way with it a lot,’’ explains Mentoring Peace Through Art co-founder Connie Fullmer, Longoria’s spouse and former special education teacher.

Now the building front which used to sprout gang symbols shines with welcoming and brilliant reds and oranges featuring kids at play, she says.

Gone is the blank slate used by gangs and graffiti taggers.

At 1208 E. Lake St., too, there is art: elephants and monkeys. “That was a tricky one” to design, Fullmer says. The building’s Somali tenants would not allow the drawing of certain images, but a 14-year-old Somali male negotiated and the art is pleasing to all, she says.

The project has attracted volunteer artists who used free paint from the Hennepin County Recycling Center.

Among them is Kate Hondlik, a student at Minneapolis Community and Technical College, who has become a project leader. “I lay down the initial sketch, then they all go in and finish it,’’ she says.

Last year students wanted to incorporate Greek mythological figures, so a Trojan horse took center stage. Atop a ladder, Hondlik used a 12-foot pole with a brush to paint the horse, while using a cell phone image held in the other hand for reference.

The couple formed the nonprofit in 2010 when Longoria received a $50,000 Bush Foundation Fellowship fine arts award. But last year was pivotal. Minneapolis’s STEP-UP Achieve Summer Jobs program signed on, providing teenagers 14 and older to wield paintbrushes and power sprayers. Teens cleaned up, patched and then painted the sides of buildings, along the way learning the importance of hard work and a four to six hour work day to earn a stipend.

Initiative coordinator Gerald Moore says the art project gives youth the opportunity to “pay back” or make restitution to their communities for usually low level crimes.

“[Jimmy] describes it as not an art program, but a work program,’’ Moore says in praising the program. Last year there were 10 court-assigned participants. This year there could be 20 or 30, he says.

So far, the program has four locations for murals, but Longoria is looking for more privately owned buildings consistently tagged by gangs. The program could also use donations of leftover paint and old brushes. Donors can contact them via their website.