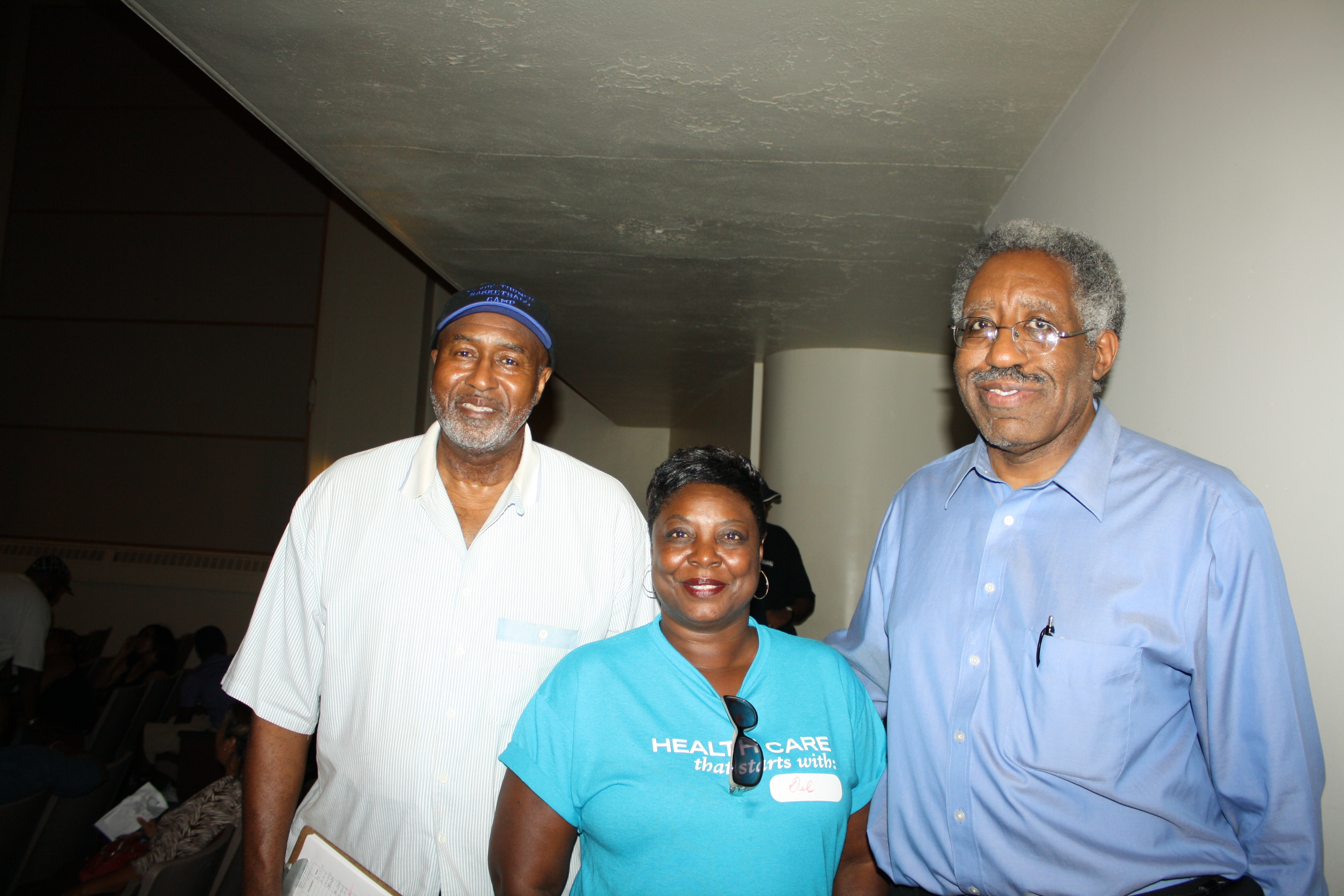 When you put a hyphen after the word Hue and connect it with the word Man, you get Hue-Man. If you look up the word hue in a thesaurus, you get some of the following words: shade, tone, tinge, tint and color. That is exactly what the organizers of the Hue-Man Partnership Project of Minneapolis had in mind.

The Hue-Man mission is to address the health crisis for men of different hues — men of color — in different Minnesota communities. On Saturday, August 20 from 10 am to 2 pm, the Hue-Man Partnership Project held its free kick-off event to address the health crisis among diverse men of all ages at the Sabathani Community Center in South Minneapolis.

The event was held throughout the center, with vendors and sponsors lining the hallways of the first floor of the building while singers J. Most and Ray Covington performed live music outside. Most offered free stepper dance instructions and demonstrations as well.

The Q-Mobile health unit trailer was on site, and everything offered was free. Vendors offered gifts of healthy foods like fruit and healthy snacks like fruit bars. Many received free first-aid kits and health-related brochures and resource literature. An estimated count of about 400 people attended the event throughout the four-hour period.

So far, the Hue-Man Partnership has support from 12 agencies and six funding organizations. One of the main supporting sponsors is UCare. Asked how she felt about the event, Del Gates, community relations and partnership manager for UCare said, “I am very excited to say that it was a success. I was so happy to see so many men, women and children that came out. The women came out to support their men, and I think this program was just great.

“Hue-Man is looking forward to doing more programs like this in the future,” Gates continued. “Our next event is actually September 26, 2011, in North Minneapolis on the corner of Lowry and Penn Avenue. It’s called the Clipper Clinic because we are going into the barbershops. Again, this one was a success, and I thank everyone who helped to make it happen.”

MSR Staff Writer Charles Hallman was the keynote speaker for the event. Although the Hue-Man Partnership Project is committed to reaching out to all men of color, African American men rank highest on the health disparity chart, according to Hallman’s shared research.

During Hallman’s presentation, he highlighted some alarming facts about Black men in crisis. Fact: Black men have the lowest life expectancy and the highest death rate in the United States. Fact: The overall death rate for Black men is 1.3, 1.8, 1.7, and 2.4 percent higher than that of men who are White, Latino, Native American and Asian. Fact: Homicide is the leading cause of death for Black men between the ages of 18 and 34.

By the time Hallman reached the third in his eye-opening list of facts, the entire room was completely silent. The most alarming fact in Hallman’s opinion is that the current generation of Black people are projected as the first not to naturally outlive their parents. Hallman says that in itself should be a topic of endless conversation as to why.

Hallman continued by addressing some of the many reasons for the conditions of Black people. He cited that Black men too often live by a misguided notion that somehow their manhood is in question if they should talk about their health issues related to physical, emotional or mental pain. Upon concluding his keynote address, Hallman received a standing ovation.

The Hue-Man partnership is a collaborative awareness and community outreach campaign to address men’s health issues in Minnesota and includes participation from the following vendors and sponsors: