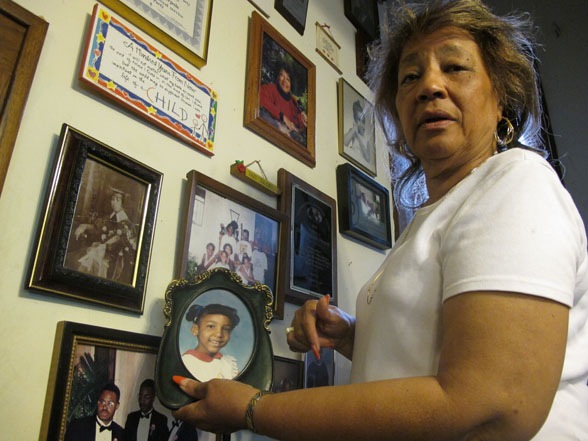 Betty Ellison-Harpole
Born: Memphis, Tennessee, 1936
Residence: South Minneapolis
Moved North: 1954 to Wisconsin, 1978 to Minnesota
Last job before retirement: taught kindergartners at Nellie Stone Johnson School in Minneapolis
What you miss about the South: The warmth of the climate and the warmth of the people
Advice to someone moving to Minnesota: If you can’t bring ’em with you, create a support system of family and friends. You need a support system to survive in a wholesome way.

Madeline Colbert, a student at South High School, interviewed South Minneapolis elder Betty Ellison-Harpole as part of a ThreeSixty Journalism project interviewing African American elders who made the journey from the Jim Crow South to the North. This is part one of a two-part story. Next week: integrating the lingerie department.

I was born and raised in Memphis, Tennessee, the seventh of eight children. I went to a segregated kindergarten, grade school, and high school. I had all African American teachers. They were very good.

We lived in an African American neighborhood, where the people were very supportive of each other. At home they would tell us, more or less, what we could expect out in the world and how we might be treated. We were prepared for it, in the sense that we knew about racism.

In high school, the books we had came from the White schools. When they got new books, they sent all the old books to us with the school’s name still on them. We could not go to the downtown library. If there wasn’t a book in your school, you could go to a little neighborhood library, which was not really well stocked, and they would call the downtown library, and maybe in two weeks they’d get the book to you.

When I was a kid, African Americans could not try on clothes, shoes included, in the big department stores. My mother forbade us to go in there, but we slipped in a couple of times ’cause they had the water fountains. They had the one that said White, which was a little higher than the one that said Colored. We would go over and turn on the White water and go, “Hmmm, I always wondered what White water tastes like!” and run out. If they caught you, you’d get arrested.

There was a joke about African Americans having bad feet. But once you bought a shoe, it was yours. You couldn’t exchange it. And you couldn’t try it on in the store.

Many people would try to wear the shoes even if they were too small and hurt their feet.  Some of them even cut the toes out the front so that they would have more room. And of course, they didn’t have the money to keep buying shoes.

The movies downtown, you’d buy the ticket, then you’d step off the sidewalk and go up the fire escape to the second level, to the second balcony. We slipped into there maybe twice. Our mother would have punished us. She said you don’t need to go that bad. I haven’t been to a movie theater 50 times in my life.

After people moved north, they had big cars. You’re buying things to take home to your relatives, so you need a big car. When driving through Indiana, it was well known that KKK were back in the woods. If they saw you driving through with a big car, they would stop you.

There was always a big shotgun in the back of their car. Sometimes they’d drive the — they’d use the “N” word — car off the highway into one of the bayous. If those bayous could talk…

My mother wouldn’t let us go to Mississippi. She said we’re far enough down south as it is. Many of the Klu Klux Klan were sheriffs. They wore sheets on the weekends. I was thirty-some years old before I went to Mississippi. The poor Black people worked down there. If you really want to see something, you go to Mississippi back in those woods.

I couldn’t go to college down there because my people moved to Kenosha, Wisconsin. I would have had to pay an out-of-state fee if I went south. My parents didn’t really think about it. They were just proud of their baby going to college.

I graduated from Booker T. Washington High School in Memphis, Tennessee with 479 African American students. Then I started at the University of Wisconsin.

When I started my freshmen year, that was the cultural shock. I literally spent the first semester staring at Caucasian students because I wanted to see what was different. There were only about 15 African Americans in the college. We had two African American professors.

The counselors didn’t have a clue about how we felt; I didn’t know how I felt. If I hadn’t been comfortable with who I was, I think it could have been traumatic. I happened to come from a situation where we were taught to feel good about ourselves. I would have loved to have more African American students. The first semester it was like being in a foreign country. I had an instructor from Russia who had a heavy accent.

I learned to take notes phonetically; then I’d go to the library and find the word that fit the most to what I had written. I would try to put the lecture together.

By the second semester, the 15 of us [African American students] had become friends. We would go to the union and study with one another.