Four years after the August 1, 2007, collapse of the Interstate 35W bridge, Minneapolis now has a fitting memorial to the people killed and injured that day. Family and friends of the victims, along with survivors, joined public officials, first responders and others August 1 to dedicate the “35W Bridge Remembrance Garden.”

The memorial is located on the Mississippi river bluffs, across from Gold Medal Park, near the intersection of W. River Road and 11th Ave. So.

Designed by local architects Oslund and Associates, the memorial includes 13 I-beam columns made of steel and opaque glass, each column featuring the name of one of the 13 people killed along with a remembrance contributed their loved ones.

A granite wall behind the columns lists the names of the 181 people on the bridge who survived the collapse. The wall is also a fountain with water running over its surface.

Water droplets fall like tears from the raised letters on an inscription, written by survivors and loved ones of the victims: “Our lives are not only defined by what happens, but by how we act in the face of it, not only by what life brings us, but by what we bring to life. Selfless actions and compassion create enduring community out of tragic events.” 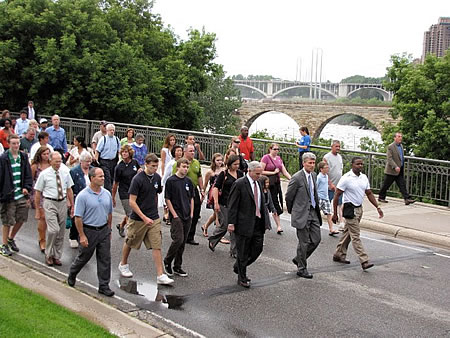 A short walkway leads to an observation area overlooking the river, with views of the new 35W bridge. Governor Mark Dayton and Minneapolis Mayor R.T. Rybak led a procession to the memorial site (above). Then the names of victims and survivors were read (below). (Photos by Steve Share)
﻿ 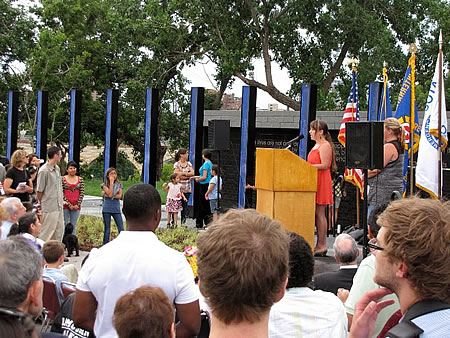 The dedication of the Remembrance Garden began with a procession from the Guthrie Theatre a few blocks away. There families of the bridge collapse victims and survivors lined up behind a color guard of members of the Minneapolis Police Department, Minneapolis Fire Department, Hennepin County Sheriff’s Department and Hennepin County Emergency Medical Services. Governor Mark Dayton and Minneapolis Mayor R.T Rybak lead the group in a quiet march to the site of the new Remembrance Garden.

Several hundred people gathered at the spot, most of the crowd filling the space reserved for families and friends of the bridge collapse victims and survivors.

Mayor Rybak related how an ordinary day four years ago suddenly changed: “People who were strangers suddenly became part of something tragic and something heroic.”

“Totally innocent people,” going home from work or to class or to church, Dayton said, “had every right to assume” that the bridge would be safe.

The victims, Dayton said, were “so terribly in the wrong place at the wrong time.”

Next, friends and family of the 13 people who died in the bridge collapse took a turn at the podium. They each read a brief remembrance of their loved ones. These readings are inscribed on the 13 columns in the memorial.

“As all these different stories come together,” Rybak said, “we’re reminded not of what makes us different, but what brings us together.”

Linda Seelen spoke for Greg “Jolly” Jolstad, member of Operating Engineers Local 49, who was working on the repair of the bridge and died in the bridge collapse. She read this text, which also appears on the column with Jolstad’s name: “Always seeming happy and carefree, Jolly truly embodied the nickname given to him as a child. He had a profound love for family and friends, those he held dear to his heart of gold. His quick wit and keen sense of humor endeared him to many. He was an outdoor enthusiast with a passion for hunting, fishing, and gardening. He also had a powerful devotion to the Minnesota Vikings and Minnesota Twins. A hardworking man, Jolly was a member of the Laborers’ Union and the Local 49ers’ union. He was highly respected as both a leader and a friend. On that fateful day in August, Jolly lost his life while working to repair the bridge. Jolly will be forever in our hearts, forever loved, forever missed.”

Speakers also read the names of the 181 people on the bridge who survived the collapse.

During a moment of silence after all the names were read, a far-off emergency siren could be heard along with the noise of traffic whizzing across the new 35W bridge.

After the ceremony, family members of victims and survivors moved in for a closer look at the memorial and visited with one another. “Glad to hear you’re doing better,” one person said to another.

One of the people who attended the event was Nick Taylor, a dispatcher for Hennepin County Emergency Services. He was working August 1, 2007 when the 35W bridge collapsed and he helped direct emergency personnel where to go. “I was just getting the job done,” he said, recalling that day. “It wasn’t until afterwards that you step back and realize what happened.”

Attending the dedication ceremony for the Remembrance Garden was important for Cavis Adams, driver of Engine 7 for the Minneapolis Fire Department, Firefighters Local 82 member, and a first responder the day of the bridge collapse. “I find I have to resist the temptation to become detached,” he said. “It reminds me as a first responder and firefighter of 13 years to become grounded and put the faces and souls back… A good thing about this memorial is it allowed me to come back to that, that it’s a human tragedy.”

“As first responders, we got a lot of credit but there were so many people who jumped into action,” said Michael Terry, a fire captain for the Minneapolis Fire Department, member of Firefighters Local 82, and also a first responder the day the bridge collapsed. “We got so much help from so many people,” including students, passersby, and construction workers who were at the site, he said. “It was nice to remember the people who were involved in this in every aspect.”

Glen Johnson, business manager of Operating Engineers Local 49 attended the dedication with two other representatives of the union.

They came to honor the memory of Greg Jolstad, the Local 49 member who died that day while working on the bridge repairs.

“It’s just wonderful what they did here for this memorial,” Johnson said.

At meetings of Operating Engineers from across the country, Johnson said, he continues to get asked questions about the bridge collapse. “It was devastating to everybody that a bridge of that magnitude would just fall in the river.”

Steve Share edits The Labor Review, the official publication of the Minneapolis Regional Labor Federation. For more photos of the dedication ceremony for the 35W Bridge Remembrance Garden, visit the RLF’s Facebook site.