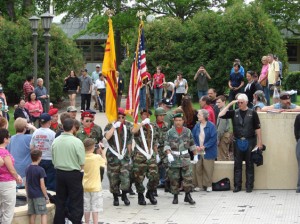 The Honor Guard from the Association of Vietnamese Soldiers of the Republic of Vietnam marches into the Memorial Day ceremony May 30 in St. Paul.

The Minnesota Vietnam Memorial at the State Capitol grounds is a wonderful place to remember fallen members of the armed forces on Memorial Day – and a few hundred people gambled correctly that the rain would subside for the ceremony on Monday.

“Please give us a moment to send sympathy to all those who have lost their relatives during the Vietnam War, and so we can thank all of you very much form the bottom of our hearts,” said Ngo. “God bless America and God bless all of you, and whoever else has sacrificed because of another for freedom.”

Estimates vary but most sources say at least 225,000 members of the Vietnamese armed forcers were killed from 1955 to 1975, with many more civilians lost at the same time. There were 58,209 Americans killed in the Vietnam War, with 153,303 wounded. 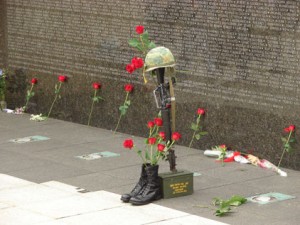 Mike Clark and Richard Bergling together served as Masters of Ceremonies, and reminded the several hundred participants that the event was not only to remember the Vietnam War and to honor all veterans that have lost their lives in service to their country.  The two invited children in attendance to present flowers at the Wall, in part to let them participate and not just be spectators.

The flag raised at the memorial for the ceremony was a coffin flag of Willard J. DuFresne, Jr., who was a staff sergeant in the 187th Infantry of the 101st Airborne Division when he was one of 56 Americans killed taking “Hamburger Hill” 937 in Vietnam on May 20, 1969.

Jason Schmit, the son of the late “Buck” DuFresne who was killed in the Vietnam War.

Jason Schmit, the son of the late “Buck” DuFresne, as he was known to friends and family, said he never knew his late father, who was killed at age 22, leaving a young bride who was still expecting Jason in May 1969. He grew up hearing great things about how the athlete, class leader and Honor Society member had planned to become a doctor.

Fortunate to be raised by a stepfather who became the only father he ever knew or needed, Schmit said DuFresne’s story is just one of many other young men and women who had so much potential – but had their lives cut tragically short because of the horrors of war.

Schmit thanked the crowd for honoring the memory of his father on Memorial Day in this way, and for keeping the memories of those lost in war alive.

The Keynote address was delivered by Roger Bobby, who served with the U.S. Navy during the Vietnam War, and is now a member of Chapter 470 Anoka County VVA. He spoke of the origins of Memorial Day, which officially began on May 30, 1868, following the issue of General Order 11, from Commander in Chief John A. Logan.

Bobby said Memorial Day is a way to remember that these fallen men and women had dreams of life after war –a new car, a job, a spouse, and a family. He said it is a day to share the burden of families who remember their lost loved ones every day of their lives.

Phil Magistad performed songs about fallen veterans on his guitar before the program began, setting the tone in a somber but pleasant atmosphere and the clouds held back the rain and with a only few thunder rolls now and then.

Rachel Gould and Adam Gruendeman performed Amazing Grace for the Lowering of the Flag ceremony.

The event was rounded out with the VVA 470 rifle squad, Larry Hall commanding, firing Three-Volleys of Musketry with ceremonial rifles before Deb Almen performed Taps on a trumpet.

The Minnesota Vietnam Veterans Memorial was dedicated in September 1992. The Chapter 470 Anoka County Vietnam Veterans of America has officiated the annual Memorial Day ceremonies at the Wall since 1994. To find out more about the event and to participate contact VVA 470 at 763-323-1336 or write to PO Box 748, Anoka, MN 55303.