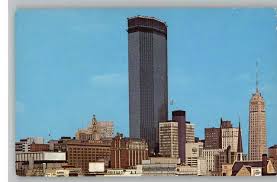 My Kid: “So, we drive around town and you keep pointing to downtown to the top of that green skyscraper and saying how you used to work there in the 80s. It’s getting annoying so either tell all or knock it off!”

Me: “I did used to work there and let me tell you it was a service industry slacker’s dream job!”

Indeed. In the spring of Ronald Reagan’s first year in office I found myself busing tables in the restaurant in the sky, the Orion Room on the 50th floor of the IDS.  For those lacking fine dining work experience busing tables means clearing dirty dishes and resetting tables so the next party can be seated. It also meant pouring water, changing ashtrays, helping the waiter and generally being a restaurant gopher. My uniform was a hideous brown polyester apron that matched the already outdated brown faux suede upholstery of the booths and wall coverings. To go with that awful apron the Orion Room busboy uniform featured a collarless cream colored poly-cotton shirt with these billowing sleeves extra wide at the wrists. This was a stupid design because the sleeves were always dragging in people’s food or getting stained in some other way. John, a wizened old Greek gentleman who spoke little English would point out attractive female customers and make unseen lewd hand gestures, trained me in.

“Job easy, waiters they tip good,” he said rubbing thumb and forefinger together in a universal sign for green.

At that time downtown Minneapolis was still basking in the 70s glory of the erection of the IDS tower and the creation of Nicollet Mall. Back in the day the IDS was the only skyscraper and it totally dominated the skyline dwarfing the only other big building the Foshay Tower.  Truly big city wannabe but there was no denying the view was great.

I was working the night of the Thanksgiving Fire on November 26, 1982.  An amazing spectacle, the flames, smoke and sparks of the Northwestern Bank Building and it’s iconic weather ball shooting into the atmosphere.  The Orion Room offered a front row seat for the lucky guests enjoying the show. I remember the windows becoming hot to the touch and wondering if we were safe.

A new guy started who was a Carleton College dropout dude.

“Are you the head busboy?” he asked me.

“Head busboy.” I restated as if this title was a real thing.

That night after closing this guy went around to all the silver ice buckets and proceeded to chug all the dregs of wine from the half-empty bottles and we are still friends today.

One of the best things about the Orion Room was that lots of slackers just like me worked there so I got plugged into a happening social scene. A bus girl and waitress knew all the local bands and musicians and later founded the band Babes in Toyland. My boy from Carleton played bass for the Hypstyrz. Some Hopkins boys who fancied themselves punk rockers and who would make their hair all spiky in the locker room with the express purpose of getting attention on the street. Middle class fellows who had no real reason to be pissed off but affected the style of disaffected British punks anyway. One was a junkie who I once witnessed shooting up in the employee bathroom. He regurgitated and finished his shift in a heroin haze. Another Hopkins guy was a laid back and stand-up guy who was the last drummer for the Replacements. I was sorry to hear that he recently passed.

Among the other characters up on the 50th floor was a suave guy, another Greek and legendary Lothario, the bartender who trained me to mix drinks and later, after I paid my dues busing tables, helped me to get promoted to bartender. During a rush at the bar he taught me to “Never lose your cool …” good advice that serves me today in my career as an educator and all the kids want help at the same time. Just like happy hour. He also taught me the word malaka. The other senior bartender, a gorgeous brunette, had an insanely jealous Rastafarian boyfriend who always, always ranted on and on about Jah love. A waiter who was a caricature of a flamboyant gay man and married to Brian Coyle. I attended a Christmas party at his house where some of the guests wore backless leather chaps while caroling around the piano. There was a tall world traveler who had an Irish thing going on and who taught me how to drink black tea with milk and sugar. We’re still friends today. And Chuck, a Northeast Minneapolis kid, photographer and budding alcoholic who went along with me on a classic slacker road trip: a three-week bicycle tour around Lake Superior. More about that later.

The cleaning staff, many of whom were disabled in some way, was run by a guy name of Vern with a cackling guffaw who maintained tight control over his crew and their paychecks with a certain measure of fear. He always wore the same blue leisure suit and must have had a whole rack of them. This was the kind of guy who drank peppermint schnapps and passed out matchbooks embossed with his name and the honorific “Humanitarian.”

The Orion Room was and still is I believe a union house and as I fell into the life of a career service industry worker Local 17 H.E.R.E. I became a union activist and one of the floor stewards. The current president of the Minneapolis Regional Labor Federation got his start as a union bartender when finally the restaurant closed for extensive remodeling and reopened with a sweetheart deal with the union allowing management to re-hire whomever they wanted.

My experience as a union steward and as an operative in a couple of strikes and executive board elections in the 80s deserves a whole separate chapter .

One night the keyboard player for Elvis Costello and the drummer, an angular Brit named Pete Thomas tore it up in the bar. Inebriated at the end of the night they refused to pay the tab and made a break for the elevators. I followed and got on the elevator with them. A belligerent Pete Thomas called me a “Nazi” and threatened my life. No matter. They didn’t make it past the guard on the main floor and I had the satisfaction of seeing Pete on the ground hands behind his back. Back upstairs I found his Barclays Visa card. I gave it to a homeless guy on Nicollet Mall.

There was also a comely prostitute who called herself Maria who the management tolerated. She was “good for business” the assistant manager and ex-St. Paul cop said. She claimed to speak fluent Japanese, to have a large dragon tattoo in a strategic area and to be a natural blonde. I assumed she was bs-ing until the night when a party of Japanese businessmen came to drink, things got out of hand and all three of her claims were proved true.

Lots of film crews came through the place and film crews were great drinkers and tippers. The transportation captain and all his drivers became loyal customers the night I carded Ricky Schroeder and refused him service.

“Good going Mike!” they cheered. “Little Ricky is a a-hole!”

The thing is I didn’t go to college right away (not an option for you my dear!) and working at the top of the IDS in my slacker days substituted for a whole lot of lessons about life that I wouldn’t have gotten on no campus.

All true stories and I’m pleased, child of mine, that you nagged me into getting them in print.