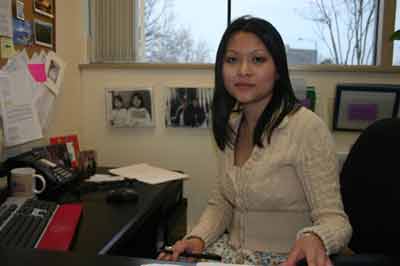 As the mayor of St. Paul for two terms in the 1990s, Sen. Norm Coleman has worked more closely throughout his political career with the Hmong than perhaps any other Senator in Washington DC where he has consistently acted as an advocate and a voice for causes that pertain to the Hmong.

An up-and-coming statesman in Washington DC, Sen. Coleman could very well be considered the most powerful person that we Hmong have access to.

While spending most of his days in the nation’s capital, Sen. Coleman relies on one person to give him the latest news coming from the Hmong community. Situated in her corner office within Sen. Coleman’s St. Paul headquarters, 22-year-old MaiNhia Khang is that person.

Officially stepping in as the representative for Sen. Coleman at Hmong events when the Senator is unable to attend, Khang’s role in the Senator’s office does however extend far beyond the needs and concerns of the Hmong population.

Carrying the title “Caseworker / Outreach”, Khang works on issues concerning immigration and foreign relations, which includes a variety of concerns from the hundreds of different nationalities that Sen. Coleman represents.

So who is this rising star and how can you get your voice heard by the Senator? Get to know more of Mai Nhia Kang.

How long have you worked for Sen. Coleman and how did you get your start in the Senator’s office?
Actually, I’ve been here for a total of one-and-a-half years. I got my start as an intern while finishing my undergrad studies at the University of Minnesota where I have a degree in Governance, Peace and Justice with an emphasis on East Asia.

It’s funny because I never thought I’d be in politics, but after being recommended by one of my college professors, I applied for the internship and was surprisingly chosen. After I graduated, the opportunity came up to stay working for the Senator as an office assistant and I took it. I’ve been at my new post for six months now.

You say you didn’t have an interest in politics, but yet your career now is heavy in politics. What changed your mind?
My political career has an ironic start. When I was young, my father worked for the City of St. Paul when Sen. Coleman was still the mayor. Receiving an employee award, my father posed with then Mayor Coleman for a picture which he proudly showed me one day and said, “You’ve got to work hard at school so one day you’ll be able to pose with the mayor too.”

I never really thought about going into politics until I went to the Hmong National Development (HND) conference held in Milwaukee. There I saw all these great Hmong leaders and educators come give great speeches which was great, but the one thing I noticed was that none of them were in politics, which alarmed me. I decided then that if nobody is going to do it, I better get into it, otherwise the opportunity will just disappear.

Now that you are immersed in politics, what are your thoughts on politics and how have you changed?
Prior to working for the senator, I admit I was politically naïve. I now understand that politics is everything. The good and the bad, politics is involved in all the important decisions that are made. Politics is where the rules are written.

What are some of the major concerns that you hear from the Hmong community when they call the senator’s office?
Most of the calls we get from the Hmong community concern international issues such as the missing children from Thailand and the human rights issues in Laos. Sen. Coleman continues to work hard with the State Department to reach resolutions in these cases. Some of the calls are personal immigration issues. And still we get calls about local issues that are usually re-directed to the appropriate local government. We find that we’ll need to educate a lot of callers on the difference between local, state and federal government and what each branch can do for the caller.

What does Sen. Coleman think of the Hmong?
Right when I first walked in the office, the one thing that caught my attention was the huge Hmong tapestry that hangs on the wall. That tells you everything you need to know about what the senator thinks, right? He’s very close to the Hmong, having worked with us all those years as mayor of St. Paul. And he continues to work very hard on Hmong issues and we talk about it all the time when we communicate.

What is Sen. Coleman’s stand on immigration?
The senator believes that a comprehensive solution needs to be found to first deal with making the borders tougher and then finding an answer to the 11 million undocumented immigrants currently in the country. He doesn’t believe in amnesty but he does believe in protecting American jobs.

Would you consider yourself a Republican?
My family, who are mostly Democrats, makes fun of me by calling me “The Lone Wolf” [laughs]. I’d consider myself a moderate Republican, or a conservative liberal. Just like Sen. Coleman who doesn’t always vote with the Republicans, I like to weigh the issue in my mind and decide what is right and wrong for the good of the community.

So what do you plan on doing with your future? Do you have any political aspirations of your own?
Well, I hope to stay working for Sen. Coleman until they kick me out! I love my position here. Currently I am applying to grad school, so I hope to pursue a master’s degree and then I hope to get my law degree. As for political aspirations, don’t be surprised to see me on a ballot some day! [laughs] I’m not sure exactly what I’d run for just yet, but I’m not leaving any possibilities out.

Are you married? ,/b>
[laughs] No, I’m still searching for “Prince Charming”.