Kill Planned Parenthood – that’s the plan from Republicans in the U.S. House of Representatives, who slashed all Title X funding for Planned Parenthood from their latest budget bill. On February 24 in St. Paul, Congressmember Betty McCollum joined a crowded waiting room full of Planned Parenthood supporters determined to push back and protect services that include contraception, annual gynecological exams, patient education and more.

“Prohibiting Planned Parenthood from receiving federal reimbursement for the preventative services they provide is just the latest Republican assault on women’s health,” said McCollum of the budget cuts.  “For decades, Planned Parenthood has provided millions of women with affordable comprehensive health care services – such as family planning services, HIV testing and counseling, testing for sexually transmitted infections, routine physicals, cancer screenings, and many other critical health care services. Any effort in Congress that denies women access to health services is a step backwards and puts women’s lives in danger.”

“I think they know they can’t pass this in the Senate,” McCollum told the group, adding that Democrats want smart investments, not “dumb cuts.” 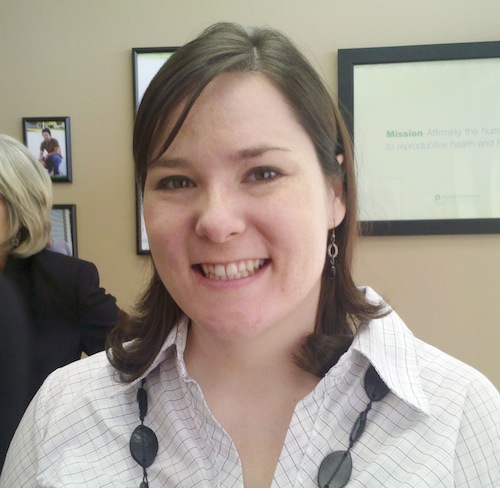 Barbara Clark of Vadnais Heights said she is here for her two sons, ages eight and eleven, as much as for her nieces and other women she knows. “They’re going to grow up and need access to family planning,” Clark said. “It’s their responsibility as much as their female partners.”

Clark noted that Planned Parenthood offers mother-and-son education on sexuality, and that she hopes to bring her sons to the classes when they are older. She said she needs help in educating about sexuality, particularly because of the “media pressure to be sexual” and the over-the-top, no-boundaries portrayal of sexuality in the media. She is concerned that children are exposed to disturbing sexual imagery and wants to be sure that her sons have “tools for good decision-making” about sexuality.

According to Planned Parenthood, its typical Minnesota patient is a woman in her late twenties who is at or below the federal poverty level.