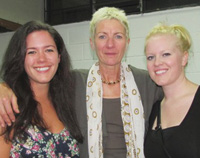 The challenge: How does a 96-year-old international organization-with a majority of members over the age of 60-involve younger women in its work?

Founded in 1915, the Women’s International League for Peace and Freedom (WILPF), an organization active within 42 countries, knows how to promote peace and justice for women around the world. What wasn’t so clear for WILPF was how to attract younger women to its membership.

That’s where a group of advertising students from the Minneapolis College of Art and Design (MCAD) came in. Led by adjunct faculty member Nancy Rice of the BSV/ADV Department, students developed a communications campaign for WILPF that would appeal to a new generation of members. WILPF’s board recently finalized a two-year agreement with MCAD to implement the campaign with a goal of increasing membership among 20- to 30-year-old women.

“Many of us see [this] as an opportunity to raise the next generation of women peacemakers and to sustain our work long term,” said Tanya Henderson, national director of the United States section of WILPF. “We have excitement and profound appreciation” that there are going to be more young women involved in WILPF, Henderson continued.

Rice is also thrilled by the opportunity for MCAD students to continue working with WILPF. “I’m just blown away with what [the students] learned and came away with,” said Rice, calling this campaign the most complicated project she has ever worked on during her 40-year career. Challenges included winnowing down 800 pages of WILPF website content and simply informing people about WILPF’s existence. “It’s amazing how many people don’t know about it,” Rice said, admitting that before the class project, neither she nor any of her students had heard of WILPF.

MCAD students Alicia Reyerson and Morgan Richter can no longer claim ignorance. They were elected by their colleagues to present the marketing campaign proposal to WILPF members in New York City, Chapel Hill, N.C., and finally Costa Rica. The plan proposes a new, streamlined website for WILPF, making it easier for women to identify how they can be involved in peacemaking efforts. They also refreshed WILPF logos and print materials, developed branding tactics, designs for T-shirts, clothing and mobile phone applications. They proposed strategic partnerships with existing organizations (such as the Girl Scouts) and developed ideas for events to bring attention to WILPF.

Now, Reyerson says her mind has been opened to the importance of being a global citizen. “You’d think with how advanced the world is, it would be impossible for there to be so much injustice, inequality and racism,” she said. “I learned how close all those problems are to home.” Working on the semester-long project prodded Reyerson to begin thinking more than two feet in front of her face, she said. “Until I got [to Costa Rica], I felt like I’d been asleep for 23 years.”

Richter said she could feel an evolution within herself as the project progressed. The more she learned about WILPF and the work of its members, the more inspired she became. “I gained a bigger feeling of community,” Richter stated. “It’s not just about my family, my friends or my schooling … being a human links us, it’s as simple as that.”

The Women’s International League for Peace and Freedom (WILPF) lobbies governments on international, national and local levels, develops action tools and monitors and contributes to the work of the United Nations, ensuring a women’s gender perspective. To join WILPF’s efforts, visit www.wilpf.org