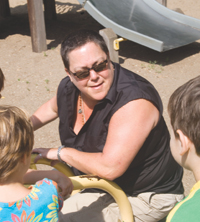 Leigh Combs chats with kids in her 'hood--Powderhorn Park.

You could argue that when a pre-teen Leigh Combs took a swig from that bottle in the woods behind her Minnetonka home, she set herself on the path to becoming who she is today: a performance artist, a community activist and a dedicated and talented counselor.

“I got in trouble when I was young, so I kinda got a little clarity and direction,” laughed Combs. “I started drinking at a young age, therefore I got caught young, and therefore I got help young.”

Combs, a snub-nosed bear of a woman with tattoos, silver jewelry and a table-shaking laugh, doesn’t make light of her substance abuse—far from it. “What I realized at the time was that I had been on a self-destructive path,” she said. “The only feeling I had access to was anger. It scared me. I kinda went, wow, this path—I think this is all that’s down there.”

Combs says her experiences—both the drinking and the recovery—gave her a level of understanding that serves her well in her job as program coordinator of GLBT KIDS, a program of the Minneapolis group Family & Children’s Service. Here she helps kids find the resources they need to get out of abusive situations; she also trains teachers, parents and other adults on how to approach kids and stop abuse.

One of Combs’ essential tools as a counselor is storytelling. She learned early on that stories helped her reach people. Combs has also carried this talent into every other aspect of her life: she tells stories in theaters, on the radio and at protests and parades. She’s also carried it inward.

“One of the joys in my life is the work that my family has done,” said Combs. “My mom and I did not do too well growing up and she’s probably one of the closest people in my life. I really think we stopped and healed the cycle of abuse in our lifetime.”

Fresh blue fruit
Combs is probably best known in the Twin Cities as the host of KFAI’s Fresh Fruit, an hour-long Thursday night show on all matters queer. She’s been with KFAI for 15 years—“The longest commitment I’ve ever had,” she joked—and in charge of Fresh Fruit for eight years. At first, she says, she tried to do it all on her own but eventually realized it was too much to handle, especially while she was working 40 hours a week as a counselor.

“It took me four years to realize Thanksgiving always lands on a Thursday!” she chuckled. “My gift is I can interview someone whose book I haven’t read. [But] I wanted to be able to plan more for my shows and I wanted more people to get involved in radio.”

Now Combs’ Fresh Fruit crew numbers about half a dozen, and she hosts only two shows each month: first Thursdays with Bob Tracy from the Minnesota AIDS Project and second Thursdays with Debra Davis and Rainbow Families.

Combs ventured into radio at about the same time that she tried performance art for the first time—with both endeavors she realized she was telling stories that she didn’t even know she had within her.

“I had no intention to get on a stage. I was never one of those kids,” she said. “But I realized through my counseling work that getting on the mike was a good way—no one could see me, just kinda the voice. Radio was a part of it—like maybe I might have something to say. I didn’t know that I would have something to say.”

Combs’ performance piece Conversations at the Blue Table, which she’s staged at Bryant-Lake Bowl maybe 20 times over the last four years, is arguably just as famous locally as her radio show. She hosted the first show as part of BLB’s Muses of August and later made an agreement with the small Minneapolis theater to do it every month that had a fifth Wednesday. The idea behind the show is to give local artists a forum.

“My thing was artists always do their thing but they never get to talk about it. And no one ever gets a chance to ask them questions,” Combs said. “This is giving people an opportunity to try something or showcase something or promote something, and they sit at my blue table.”

Why blue? “I just like blue and I couldn’t find a blue couch,” laughed Combs.

The artists who come to the Blue Table sometimes find the impact reaches beyond the small Uptown stage, said Combs.

“People have said, ‘I think the reason I got my grant is because [of the Blue Table].’ They videotaped it and used it as part of [the grant application]. I’ve had three people tell me that.”

Despite finding success with The Blue Table, Combs isn’t sure she’ll continue. “I’ve struggled with it the last year,” she said. “Unless I’m doing performance for a living, I don’t want it to feel like work. It’s never been my goal to have it be something that I make a living at. … I was doing four to five times a year and maybe I’ll only do two times a year.”

The mayor of Powderhorn Park
You might think that with a radio show, a regular performance art piece and a full-time job Combs is pretty busy. But she’s also building her portfolio as a movie actor (though she’d rather write and direct), working at local events like the recent Take Back the Night and volunteering for community events like Pride and the Powderhorn Art Fair.

“It looks like I might be traffic coordinator this year [for the art fair],” she said. “I love the park. I live on the park. I’ve been called the mayor and the pope of Powderhorn, and my struggle is which would I rather be.” She roared with laughter at her own joke. “I kinda shy away from elected official stuff—it’s kinda gross.”

Romance is one area of her life that Combs deliberately keeps simple. “I’m single,” she said. “Currently single and happy.”

She said she’s chosen to deepen her already existing relationships rather than work at finding new ones. She often meets her mom, Martha Combs, at the May Day Cafe in Minneapolis, and she’s close to her father, brother, two sisters, niece and nephews. Having a warm and loving family is a luxury Combs doesn’t take for granted. “I really felt like I was on my own journey for a long time, and I never quite felt a part of the family,” she recalled. “It’s so beautiful that at this point in my life—I’m 45—that it just gets better. It’s really cool.”