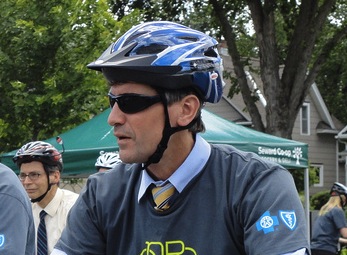 I have a long-held belief that the Portlandia mayor is secretly based on R.T. Rybak. Okay, I know, I know, it’s probably more likely that Portlandia’s mayor is based on Sam Adams, who was mayor of Portland when the IFC show—a satire of contemporary hipster culture—first aired in 2011, and who made a cameo on the show. Still, you have to admit that Portlandia’s mayor has a bit of a Rybak-esque quality, or vice versa.

As a matter of fact, I think I like the show so much because it reminds me of Minneapolis and the progressive, bike-loving artsy community here, even if the show makes fun of that culture. Plus, R.T. Rybak is always doing hipster things like body-surfing at rock concerts. He’s definitely got an adorkable appeal, you have to admit. Or maybe it’s just me?

Anyway, I know he’s not perfect, but I’m going to miss Rybak. I liked having a mayor who you could see riding across the Stone Arch Bridge. I liked that he declared Slim Dunlap Day, and Doomtree Day, and Limerick Day (even though he passed on our suggestion to declare a Twin Cities Daily Planet Day). Sure, it’s a bit cheesy, but it was enough to put a smile on my face when those things happened.

The reality is, I don’t think Minneapolis is doing so bad at all. I really like living here. We have wonderful parks, great bike lanes, lots of arts and museums and bookstores. Is the city perfect? No. Is there work to be done to make our schools more equitable, our streets safer, our water cleaner? Of course. And I hope that my fellow Minneapolitans are paying attention to the current race so that we can pick a leader that will make this city a better place, and more equitable for all.

Of course we can’t have pre-conceived notions about what a mayor should be like. Good leadership, after all, has to do with innovation, with listening to where there are concerns in the community, and forging a path that will be best for everyone living here. That leader might look and act completely different from our previous mayor—I for one am very curious to see who that person is going to be.