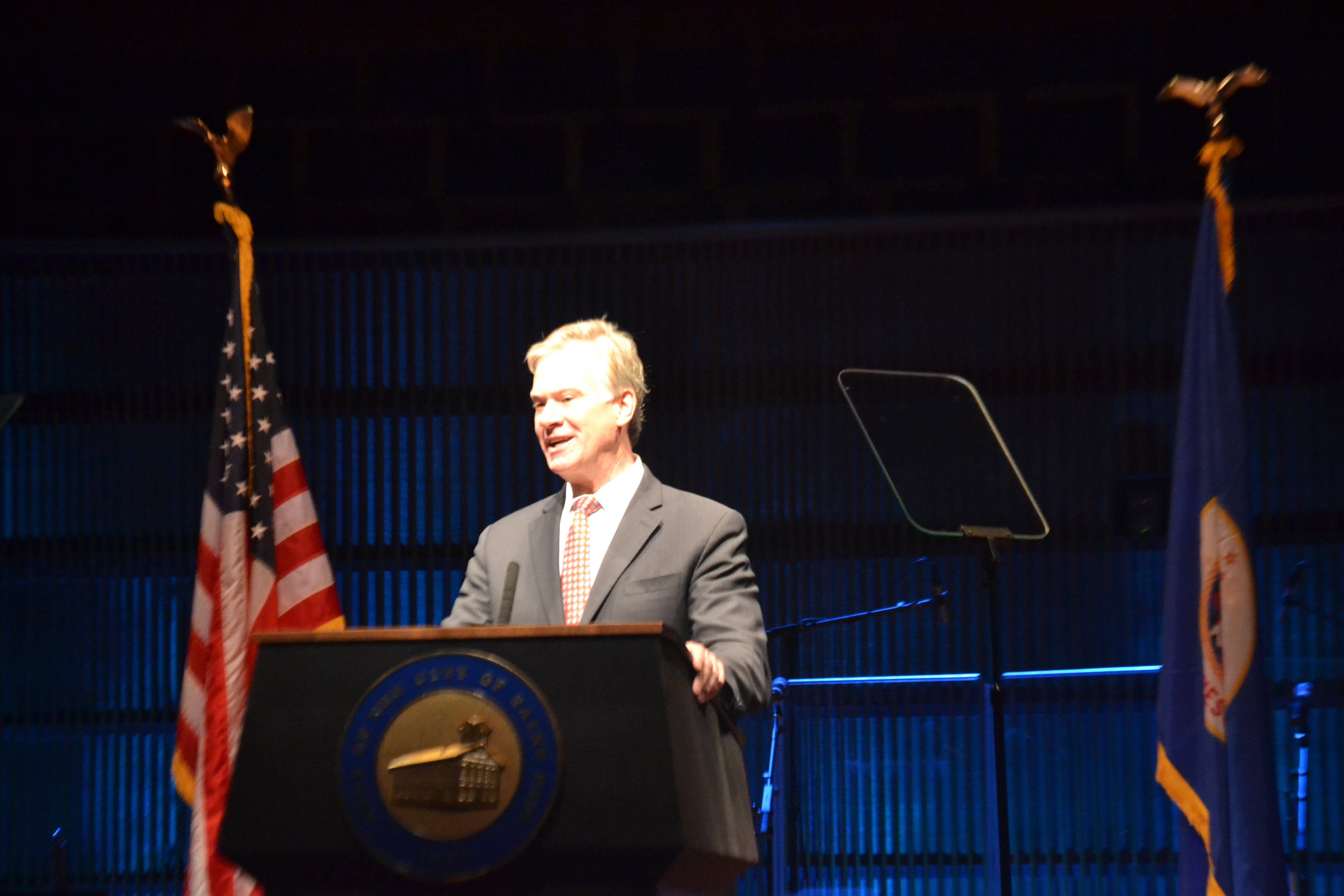 St. Paul Mayor Chris Coleman at the podium at Ordway Center for Performing Arts for his State of the City Address on April 16.

Mayor Chris Coleman, in his 10th annual State of the City Address on April 16, discussed his mission to lower disparities between people of color, making better use of parcels and supporting local artists so St. Paul is known as the city of music in 2016.

“The higher purpose for our city and region must be to ensure that which to the best of our community is shared by all within our community,” Mayor Coleman said.

“We can say that we’re the most educated city. For that’s certainly true for many residents,” he said, “but that wouldn’t honestly reflect the fact that so many of our children are falling behind and that the Twin Cities is a community with one of the largest achievement gaps in the country.”

Mayor Coleman did say he was pleased with the progress of the Saint Paul Promise Neighborhood, which is the program aimed to set a new standard for approaching education and family stability. The program works within the community to help with education and has been implemented in communities in Frogtown and Summit University.

“The Promise Neighborhood Partners rolled up their sleeves, reached out to over 600 families to help shape the work, and proceeded to build a network of support for children and families that is showcasing how to stop talking about closing the achievement gap and actually move the needle in the right direction,” he said.

He overviewed some the success of Jackson Preparatory Magnet School, an elementary school in St. Paul, and spoke of their recent accomplishments.

Mayor Coleman announced the school increased in terms of the percentage of students who enroll there live in that community, it’s up to 85 percent where in the past it was at four percent. The community also improved from a one percent gain on state achievement test scores to eight percent and through the results they found no trace of racial differences in those gap achievements.

Mayor Coleman shared that the city has attempted to lower disparities in unemployment by working with the Saint Paul Foundation. They created a program where they’d train low-income residents and people of color to become paramedics at the EMS Academy.

He highlighted the works of one of the members at the academy who helped rescued a family from a house where there was smoke. On his way to work at the Rice Recreation Center, he saw the house and went in to rescue the family by applying what he had learned from the academy.

“The work we do in St. Paul must move our city to a place where all our families thrive, regardless of race or socio-economic status,” Mayor Coleman said.

He also wants to ensure that all veterans have a home and has pledged that by the end of this year every veteran will have a home. The mayor’s office is working with Catholic Charities to address that issue.

He cited that lowering disparities in out-of-school program involvement was something the city accomplished. He said this year they rose to 83 percent of colored youths participating in those programs and 80 percent of those programs participants were living in low-income households.

Rebuilding the Ordway Center for Performing Arts and the building of CHS Field, home for the St. Paul Saints and Hamline University’s baseball team, were some new additions in venues that Mayor Coleman highlighted.

He said rebuilding Ordway was more than just redesigning for aesthetics; it was also using another source of energy for sustainability. He highlighted that CHS Field will be one of the greenest stadiums in the country. CHS has solar panels to power the scoreboard and a water system that recycles rainwater to take care of the grass.

In addition to those venues, Mayor Coleman wants to see more change and for the city to better use its parcels. One in particular is the Midway shopping center.

“Along the green line we must fulfill the promise of a first-class transportation system by redeveloping the former bus parasite and the Midway Shopping Center at Snelling and University,” Mayor Coleman said.

To redevelop other parcels he requested the City’s Planning and Economic Development Department to reach out to community partner to identify key parcels in their districts that would benefit from its funding.

“The goal, of course, is to help create 21st century, vital neighborhoods across the city of St. Paul,” Mayor Coleman said.

Along with the renovated Ordway, the Turf Club has also been renovated. Mayor Coleman said supporting local artists is something he wants to see improve in 2016.

“Let’s make sure that our musical venues and artists are supported and celebrated in 2016 like never before. Let’s do it because it reflects our higher purpose and because culture and music and vitality are inextricably linked,” he said.