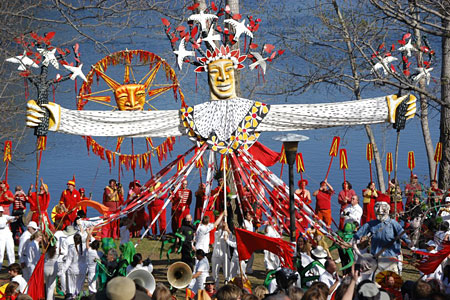 In the Heart of the Beast Puppet and Mask Theatre’s annual MayDay Parade, Ceremony, and Festival has been a vibrant example of art as community building in the Twin Cities area for 38 years.

For many in Minnesota, the MayDay Parade is a time to celebrate the coming warmth with hand-built puppets and masks (some over 10 feet tall), music, and performance in the street. But the essence of the parade is rooted in the local community and contemporary issues, concerns, and visions for a better world.

When the community workshops began the first Saturday of April, the theater’s main performance space was converted to a giant studio space. Throughout the month, everyone was invited to the 16 public workshops, and participated in the building of this communal story through the creation of puppets and masks.

By the time the parade unfolds on the first Sunday of May, more than 50,000 people from near and far will fill the streets both as participants and spectators for this day of celebration and community.

The theme for the 39th Annual MayDay Parade and Festival is See the World. The story this year is inspired by a cantastoria called Hallelujah, created by the venerable Bread and Puppet Theater in Vermont. This year is the 50th anniversary for that theater, one of the oldest puppet theaters in the country, and an inspiration for many puppeteers and artists of all stripes!

Hallelujah, as imagined by the Bread and Puppet theater, is a painfully honest and simple story about how our actions affect our beautiful world. If we care for the world, and let the sun shine on it, and water it, the crops will grow, and so will the children. If we put poison on the world, however, if we set fire to it, then nothing can survive. The power of the script lies in its simplicity, and its profound call to action. We are thrilled to be presenting an adapted version of this story for the 39th annual MayDay Parade and Festival.