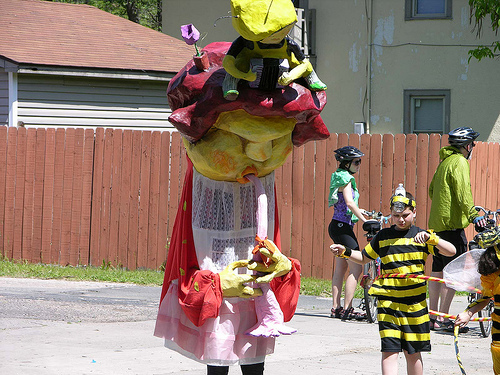 This year’s parade starts at 1 p.m., Sunday, May 5, on 25th street, in South Minneapolis between Cedar and Bloomington Avenues, and heads along Bloomington to Powderhorn Park (where the festival begins at 3). The 2013 theme, “See the World,” is inspired by a cantastoria (sung story) called “Hallelujah” from Bread and Puppet Theater in Vermont. (Fun fact: they’re one of the oldest puppet theaters in the country, and it’s their 50th anniversary this year.) According to HOBT, “Hallelujah” is “a painfully honest and simple story about how our actions affect our beautiful world.”

Despite fears that the theater’s budget wouldn’t allow for funding of the MayDay Festival this year, the festivities are on for May 5, 2013. But with a 33.3% budget reduction for MayDay from previous years, HOBT Artistic Director Sandy Spieler is appealing for public support. (Sandy’s plea generated a lot of comments about the cumbersome nature of donating on HOBT’s website, so here’s an easier way.)

Budget woes aside, the 39th MayDay seems to be on track in the creative department. We’re already more than halfway through an April of public MayDay workshops, which is where the behind-the-scenes puppetry spells are cast. Alan Wilfahrt stopped in at HOBT’s theater-turned-studio in the first week, and again for the second and the third. His latest MayDay update:

“There are still appeals for participants in any and all of MayDay. After this week of workshops, rehearsals for the Ceremony will commence. So if the Ceremony stage is your aspiration, you need to join in quickly. For pageantry of a lower key, you will still want to stop in to get an idea of the costuming themes that are developing.  Making a mask for your Parade Persona may take a few workshops. There are unlimited number of opportunities to Parade, and a great number of volunteer positions far from the glare of the spotlight. Help Build MayDay with your unique contribution.”

Here’s hoping that, come May 5, the weather is better than it was in 2012 (Come On Spring!). Last year’s MayDay was postponed from the traditional first May Sunday until the sunny second one; our very own (you guessed it!) Alan Wilfahrt was there to take photos of the rescheduled festival. In 2011, the festivities brought warmth to a chilly, overcast May 1; here are some great Alan Wilfahrt photos from that crow-themed MayDay.

Sidenote: HOBT’s retrospective collection of all the MayDay posters going back to 1975 is worth checking out—it’s a fascinatingly “imaginative history of the times.”

What visual enchantments will this year’s theme inspire? Only MayDay can tell! …though, of course, you can get a sneak peek of the sights you might see at the parade and festival if you sign up for (or look at Alan Wilfahrt’s photos of) HOBT’s Public Workshops, which go through the end of the month. (There are also plenty of other ways to volunteer for the artistically un-inclined.)

You can certainly expect a variety of puppets, masks and costumes, 50,000+ participants, live music, performance, dancing, yoga, poetry, canoe rides, food–all rooted in a community vision for a better world–at Powderhorn Park on the first Sunday in May. (A few highlights to look out for: Jamison the Juggler at 2pm, local band Machinery Hill at 4, and MN Youth Poetry Slam Poets at 5:30. Check out the full festival schedule here.)

(As for whether you can expect sunny skies… that’s a whole different ballgame.)