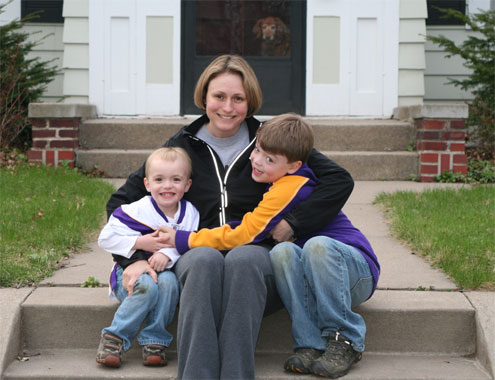 Ellie Zuehlke with her sons Gus and Graham - all smiles now that Ellie's maternal depression is a distant memory.

Thirteen days after the birth of her first son, Graham, Ellie Zuehlke experienced the first profound effects of maternal depression, which she likens to being hit with a Mack truck.

“And it was a complete and utter shock to me and my family. I really didn’t know what was going on at first, but I was unable to eat, unable to sleep, really unable to function at all,” she said.

Zuehlke also experienced an array of physical symptoms as well, including dizziness, nausea, and chronic pain. But when the normally optimistic go-getter was struck with suicidal thoughts, she knew it had to be something far more serious than the “baby blues” she was warned about.

The “baby blues” – the weepiness and overwhelming fatigue, felt by up to 80 percent of new moms, typically goes away by itself within a couple of weeks. But maternal depression is more long-lasting and severe, and much more difficult for people to come out of without support and services, according to a new report out from the Children’s Defense Fund – Minnesota.

“It actually has a physiological effect. It raises the cortisol levels that will affect both the mother’s health and the baby in the womb’s health. It can also result in elevated stress-hormone levels, even after the child is born,” said Marcie Jeffreys, director of policy development for Children’s Defense Fund Minnesota, and author of the report.

One in ten Minnesota mothers experience the condition, which cuts across all incomes and cultures. Rates jump to 15-60 percent of women in certain high risk groups, including women with a history of depression or mental illness, mothers with prior bouts of post-partum depression, American Indian, Hispanic and Black mothers, low-income women, and teen parents.

However, many pregnant and post-partum women shy away from treatment because they assume it means taking medication, said Kim.

depression. I like to tell my patients it’s not the first thing on the list, and it’s not the only thing. At the same time, it can be a life-saving treatment for some women with more severe depression,” she adds.

Kim says other treatment options include psychotherapy, increased social support, community engagement, which can all have a huge impact on recovery.

The bad news is that accessing those treatments can be difficult, especially for low-income women. And the consequences of untreated maternal depression can significantly impact a child’s early development, and later success in life.

Each year in Minnesota, more than 10,000 babies are born to mothers who will experience maternal depression.

According to the National Center for Children in Poverty, maternal depression is a stronger risk factor for child behavior problems than smoking, binge drinking, and emotional or physical domestic violence.

There’s a growing body of research and evidence out there about the importance of early childhood, including neuroscience that points to how a child’s environment impacts brain development.

“And one of the major risk factors for people having greater problems, both later in their childhood and in adulthood is a parent with a mental health issue, and especially maternal depression,” said Jeffreys.

Zuehlke says to this day, she’s saddened by the impact her depression had on her child.

“When Graham first started smiling, he smiled at everybody except for me. Because I physically could not smile at my baby, I was incapable of interacting with him,” she said.

But Graham had a father, and numerous local relatives that provided him with quality care and kept him engaged and thriving.

For many low-income or teen mothers facing depression, this isn’t the case – it can be an isolating, lonely experience for both mother and child.

Gay Bakken is manager of the Metro Alliance for Healthy Families. The organization offers a home visiting program for teen mothers, 53 percent of whom experience maternal depression. Bakken has had the opportunity to accompany some of the care providers on home visits with teen mothers.

“I am constantly struck by the thought – how many engaging human voices does this infant hear in a day or in a week,” she said. “We’re a one hour service, once a week, for the first year. The human voices, the human interaction, being responsive, are all critical to the way that brain is wired.”

Bakken adds, too often, that one hour each week is simply not enough.

“What we’re finding is that by 18 months, many of our children have language delays because they haven’t had a rich environment in terms of human interaction and responsiveness.”

Four things need to happen to improve treatment for maternal depression– reduce stigma, create barrier-free access to treatment, enlarge workforce to be able to offer appropriate, culturally-specific care, and raise awareness that help is available. That’s according to Sue Abderholden, executive director of the National Alliance of Mental Illness, Minnesota.

She says the stigma surrounding mental illness is so great, that people often live with the symptoms for almost a decade before seeking treatment. Add depression or anxiety into the mix of being pregnant, or a new mom, and the stigma grows even greater.

“People are very leery of letting anyone know, because what will people think of you now? Not only in terms of the illness, but also you as a mother.  And if you’re low-income, you may fear child protection showing up at your door, and that makes it riskier business,” said Abderholden.

Even though she is a health care professional, Zuehlke admits that she, too, feared letting anyone know how she was feeling, concerned they would take away her baby. She was also afraid that if her employer found out, she would lose her job.

Zuehlke urges moms not to let such fears stop them from seeking help.

“Absolutely, you need to get help when you are in that situation. You are not in a position to be able to deal with it alone. My message to moms and families is to reach out, get help wherever you can, and you will recover. As hopeless as it seems while you are in it, it really does get better.”

Ready to get help, but what happens now?

Abderholden said once fears are overcome, and women seek treatment, that’s when the real barriers reveal themselves.

“We have a limited supply of knowledgeable mental health care professionals who are really specialized in this area, and we don’t have many culturally-specific providers, which creates a barrier for some moms seeking out help. And then once you find someone, how will it get paid for?” she said.

Bakken says 85 percent of the teen moms screened for depression through her program truly want help, but there are significant barriers to getting timely support, including transportation, child care, insurance, and finding an acceptable care within their geographic area.

Zuehlke is one of the lucky moms. As a college-educated, health care professional, she had maternity leave, and good health coverage with access to treatment.  She is happily married, the baby was planned and wanted, and her extended family lives locally – all factors that contribute to a successful recovery.

But yet—even with all the resources available at her fingertips, Zuehlke  faced a year-long journey to recovery. Part of this she attributes to the challenge of finding the right care.

“I ended up doing some changing around until I was able to find a provider that was able to provide appropriate care, which took quite a bit of work. Fortunately since I work in health care, I was able to get some help making those connections.”

This experience makes Zuehlke all the more concerned about mothers that don’t share the same resources she does – and the potential impact this has on the children.

“I think we know now, evidence about the profound, long-term impact of maternal depression on a child’s development,” she said. “So not only is supporting the mom in the short-term the right thing to do, from a long-term perspective of protecting that child from long-term problems, I think it’s such a critically important public investment.”

“We all need to care about this issue because given the changing demographics of our state, we’re going to need as many children as possible to be productive and contributing to our economic prosperity in the future,” said Jeffreys.

She points to recent reports from the state economist and state demographer that underscore the importance of a productive workforce to the state’s economic future—a future, she says, that depends on children who are healthy, functioning, and ready to learn. 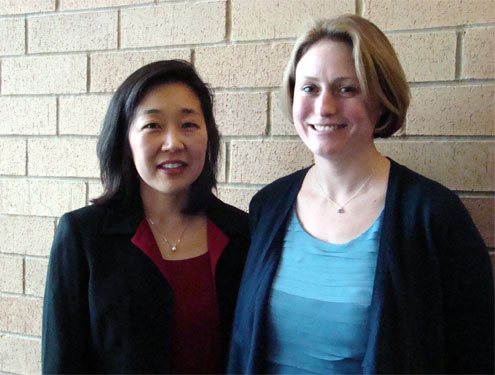 All the experts agree – targeting services for high-risk groups makes the most sense in a time of finite resources – and it makes for the best outcomes.

Programs that take a two-generation approach, and treat both parent and child are best, says Jeffreys—home visiting programs like the one offered by Metro Alliance for Healthy Families, and programs that offer both parenting and early childhood classes like Head Start.

“But none of these programs are to scale, so a lot of families are still going without the support needed to address maternal depression,” she says.

Developing relationships between people who serve mothers and people who serve babies and children, and raising awareness about all available services is important in ensuring that referrals are made, said Kim.

“It’s also important for health care providers to relay the message to patients and families that mental health is an integral part of physical health,” she adds.

Zuehlke also urges health care providers to do routine screenings of moms during pre-natal and post-partum visits, as well as familiarize themselves with specialists in maternal depression, so appropriate referrals can be made.

Focusing on early intervention and prevention is key, particularly in situations where providers can anticipate cases of maternal depression, says Jeffreys.

While she wasn’t considered a high risk category before her initial experience with maternal depression, the very fact that she developed it with her son Graham, made Zuehlke much higher risk for a reoccurrence.

So when Zuehlke and her husband chose to have a second child, she started treatment and sought out resources during her pregnancy.

“So through a combination of medication, social support and just logistical support, I was able to avoid a repeat of the depression,” she said.

“And boy I can tell you, it is night and day, the difference between parenting, or attempting to parent, with depression, and just the normal post-partum recovery and parenting a new baby.”

Zuehlke’s happy to report when her second son, Gus, first started smiling, she was the first person he smiled at.