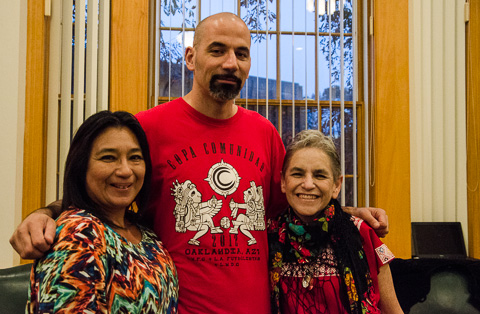 The Ordway Center for the Performing Arts’ two-week festival Mascaras y Milagros: Mexican Arts in Minnesota concluded on October 26 with a performance by jazz musician Poncho Sanchez. During the festival, the Ordway sponsored a series of art and cultural events that celebrated Mexican art and culture in Minnesota. A sequence of talks titled “Cultural Conversations” provided an opportunity for community leaders, activists, and artists to comment on relevant issues for Mexicans and Latinos. The two final conversations focused on immigration and spoken word.

Editor’s note: Anna Hoeschen attended the Mascaras y Milagros Cultural Conversations and submitted two posts: an objective news report and an essay including her personal perspective. She asked which I’d prefer to publish, and I suggested that in the interest of opening a discussion about personal perspective in citizen journalism, we publish both. This is the news article; click here to read the writer’s personal perspective. Please share your own perspective in the comment section, below, or by submitting a response post to jay@tcdailyplanet.net. – Jay Gabler, arts editor

On October 18 at the University of Minnesota, attendees participated in a discussion with the theme “Removing the Mask: Immigration Redefined.” The conversation illuminated the misconceptions surrounding Mexican immigration in the United States.

General Consul Ana Luisa Fajer of the Mexican Consulate in St. Paul prefaced her remarks with a quote by Mexican writer Carlos Fuentes: “Recognize yourself in he and she who are not like you and me.” The concise yet poignant message set the tone for the ensuing discussion, which would revolve around common misperceptions of immigration.

Fajer commented on the international trade relationship between the United States and Mexico. She argued that the bilateral partnership between the two countries is dynamic and growing. Six million jobs in the US stem from US-Mexico trade relations, Fajer noted. Additionally, Mexico ranks first or second as a top trade partner for 28 states in the U.S., which helps to account for the 50 Mexican consulates that exist in the United States.  Drawing these statistics closer to home, Fajer said that there are currently 200,000 Mexicans living in Minnesota, primarily Hennepin, Ramsey and Dakota counties.

Fajer described the sometimes strenuous relationship between immigrants and local-area residents as “a tale of two cities.” Some Americans may perceive immigrants as breaking the rules and not living in accordance with the law or adhering to policies. Mexican immigrants, however, recognize the value of their labor. Collectively, they make significant contributions to the nation’s prosperity and enhance its’ economic vitality. The notion that immigrants are a burden for the state, Fajer argued, is a myth. 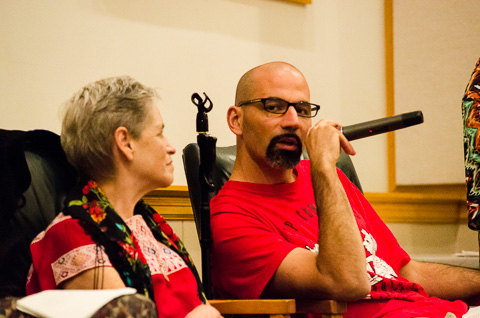 Jimmy C. Patiño, Jr., assistant professor in the Department of Chicano Studies at the University of Minnesota, provided an overview of the history of immigration in the United States. His summary helped to situate immigration in a contemporary context and explained how immigration policy has evolved. Patiño encouraged a sustainable approach to immigration and discouraged a polarized political approach. Rather than look at immigration as an error or a problem, he suggested viewing immigration as a broken system.

It is a system that can be improved with creative and viable solutions. What are those solutions?

The first step, the speakers argued, would be to do the homework and engage in more objective discourse. While arguing for an objective and scholarly approach to these issues, the cultural conversation the following night emphasized the artistic approach to embracing Mexican and Latino identity.

On October 19 at Macalester College, Twin-Cities-based Mexican and Latino spoken word artists Palabristas explored the meaning of being Mexican and/or Latino in the U.S. Their cultural conversation, “Honoring Our Identities,” was facilitated by spoken word artist Lupe Castillo. Each member offered insights and shared their personal experiences. Using language to express their feelings, fears and hopes, their performances proved that each individual’s experience is unique.

One common thread between the two talks was the express concern for discrimination against the Latino community. As one Palabrista said, “You gave us names because you could not say ours.” The writers explained that their art is one more tool for social change; their hope is that other people will feel empowered by their words. Likewise, a student at the immigration talk expressed his frustration regarding stereotypes towards his family and his community. Having faced a long and treacherous process in hopes of becoming legalized, he expressed his frustrations regarding discriminatory attitudes. The idea that Latinos want to recede into the shadows, without proper documentation or citizenship, he argued, was untrue.