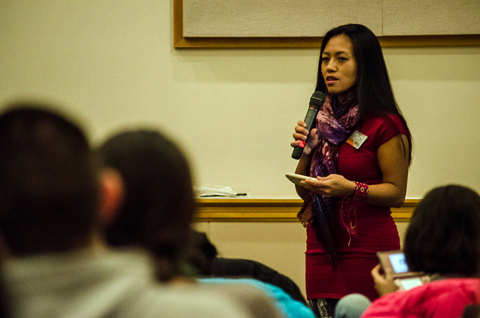 I had the grand opportunity to be the community coordinator for Mascaras y Milagros: a series of events hosted in October by the Ordway Center for the Performing Arts. After more than a dozen events celebrating Mexican arts, dance, music, and culture in Minnesota, words cannot express how proud and honored I feel to be a part of this incredible event series—and, more importantly, my admiration for the work and contributions of all the artists and community members, both locally and internationally, involved in this collaboration.

Without even knowing it, I became involved in the art scene in the Twin Cities Area in early 2000. I joined a traditional Aztec Mexica dance group and began learning the traditions, the art, and the history of Mexica Aztec Nahua culture. Although I have been learning and sharing these traditions, it was not until about six years ago, when my husband, Sergio Cenoch Quiroz, and I formed our own group called Kalpulli Yaocenoxtli that we began to be recognized by community members and organizations as artists.

Our group comprises clusters of families who are committed to life-long learning and preserving the Mexica/Nahua indigenous traditions. Yaocenoxtli means warriors of the first cactus flower, and our group focuses on learning and preserving dance, drum, philosophy, and language classes throughout the year. This is free and open to the community.  However, our work as artists blossomed as we began to work in schools as resident artists and even received the Community Partnership grant through the Minnesota State Arts Board in 2010. Entering the art scene was unintentional, but naturally flowed with the vision of the work Sergio and I began developing within our dance and drum group.

Before we became Aztec Mexica dancers, my husband and I were already dancing together.  We met at a very young age—in seventh grade—and although it was not love at first sight, what attracted me to Sergio was his strong sense of identity and his Mexican pride.

For me, coming from a culture and a country which has been influenced by various countries, the identity of a Filipino person can vary depending on the heritage, the region, and the island one comes from. Some claim their Spanish heritage; others will claim their Chinese heritage. Even though we are all Filipino, our identies as Filipinos are diverse. With the wide array of identities in my lineage from both parents, I did not embrace my indigenous Filipino roots until I met Sergio.

Although I was born in the Philippines, I immigrated here in 1989 with my family, and I’ve been a St. Paul resident for as long as I can remember. Currently, I’m working for St. Paul Public Schools as a site coordinator for Battle Creek Middle School. I love youth work; it’s something I’ll always be very passionate about, because youth is the age in which your true identity is slowly revealed. I try to provide every youth I know an opportunity to connect with their interests through school, art, employment, and more.

I say this with purpose and intention, but I think everyone is an artist; all people need to express themselves in some way. I love facilitating that process for youth. I had ten students from my school make masks for Mascaras y Milagros. Some of the kids were from Mexico, and some were from other parts of Latin America. Their work was displayed at the Ordway, and parents had the opportunity to view the work. The students talked about the meaning of their masks. It was really powerful.

Sergio and I continue the dance tradition, because now, we have three children and we want those traditions to be carried on. My kids learn the songs in Nahuatl—an indigenous language still spoken in Mexico—and they learn the meanings of each step of every dance. My son Sergio (14) is a drummer, and my two younger daughters (10 and 4) dance and sing. My children are growing up learning these traditions in a bilingual context. The dancing and the drumming are beautiful expressions of art; but, what I love most is the beautiful teachings based on Nahua philosophy, which unites our family with a strong foundation.

More broadly, my community is an extension of my family. I’ve done a lot of community organizing for the past ten years, and I made connections in the Mexican/Latino community. Whenever I do events like this, I try to pull in as many community members as best as possible. When the Ordway approached me, it was a clean slate, the doors were wide open and the end result was phenomenal.

The art community in Minneapolis has a lot of going on, and it’s great. What I like most about art in the Twin Cities is that there’s a lot of culturally-specific art. Still, you may not know about it unless you’re tied to that community. Unless you’re connected to the Mexican/Latino community, you might not know about these artists. That’s why Mascaras y Milagros is such a great event; it exposes Mexican artists, and it presents the community with an opportunity to be involved. In St. Paul, the Ordway is a leading entity. I hope that the Ordway is looking to do more work like this with other groups. I’m hoping for a lot more cross-cultural art. Our drum group participated in an event called United We Drum. It was a festival that featured various types of drumming: Taiko, West African, and Hindu. I’d like to see more bridging and connecting and see what we come up with.

Overall, I am very happy with the participation in Mascaras y Milagros. I think, typically, the Ordway is viewed as prestigious and inaccessible. It’s funny because, I was talking to someone at the conclusion of a Mascaras y Milagros performance at the Ordway, and the individual commented, “Wow! There are so many brown people here; we’ve never seen so many brown people here!” Talking about the art exhibition, someone said, “I’ve never seen the theater so colorful!” These were positive comments; it was about expanding the theatre’s reach. It’s a beautiful space that should be accessible to everyone.

From January of this year until August I served as a community liaison for the Minnesota States Art Board. These were important questions we discussed. How can we make art events more accessible to people of color? The Twin Cities are really diverse and we need to maximize that; as a progressive state, what better place to embrace diversity? With events like Mascaras y Milagros we’re able to accomplish that. It helps bring people together and make them aware of each other.