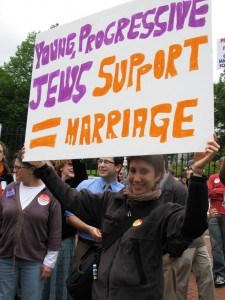 “Shall the Minnesota Constitution be amended to provide that only a union of one man and one woman shall be valid or recognized as a marriage in Minnesota? ___Yes   ___No”

Oy, are we here again already? With a never-ending election cycle, that is played out in the 24×7 media, which in turn feeds the claims, counter-claims and stylized posturing of politicians, it should come as no surprise that the leadership of the GOP-controlled state Senate and House of Representatives has fired the opening salvo of the 2012 campaign. What is at issue? It is not the deficit, or jobs, or health care, although one could be excused for assuming that any of these important issues would figure prominently in the lead-up to our next election of state government leaders. Instead, state senators and representatives have been debating whether or not any Minnesotan may choose to enter into a legal marriage with the person they love.

Specifically, two bills are working their way through the State Senate and House of Representatives that, if approved by both bodies, would place a constitutional amendment before voters that bans same-sex marriage on the 2012 general election ballot. Under Minnesota law, if the proposed constitutional amendment is approved by the legislature it does not require the governor’s signature and goes directly to the ballot. The timing of this measure gives the appearance of strong political motivation, as it has become conventional wisdom that key wedge issues increase voter turnout, especially among socially conservative voters who are also more likely to vote for socially conservative (nearly always GOP) candidates.

In recent decades, many “wedge issues” equate to civil rights for women and gay/lesbian/bisexual/transgender (GLBT) people, and fair and reasonable treatment of undocumented immigrants. These divisive issues are exploited to shore up the power base of socially conservative politicians at the expense of marginalized or otherwise vulnerable people.

Now it is Minnesotans’ turn to determine whether or not we will put the civil rights of a minority of its citizens up to a vote of the majority in 2012.  I believe that this must not happen. Enshrining marriage inequality in the Minnesota Constitution is bad law and is inconsistent with Jewish values.

(Disclosure: I am not an attorney, so please use the following comments to begin your own inquiry on the legal consideration(s) of this issue.)

While state same-sex marriage bans have been key issues across the nation for several election cycles, such a ban in Minnesota would be redundant for two reasons. First, Minnesota banned marriages between two people of the same sex by statute in 1997. It is not possible for two men or two women to be issued a marriage license in Minnesota because it would be illegal for authorities to do so.

The second reason that same sex marriage ban amendment is redundant is particularly interesting. Minnesota has the distinction of being perhaps the first state in which its supreme court ruled that there is not a constitutional right for two people of the same sex to marry. In 1970 Richard Baker and James Michael McConnell applied for and were denied a marriage license in Minneapolis. They took their case all the way to the Minnesota Supreme Court and the resulting decision, known as Baker v. Nelson has been binding on state courts for more than 30 years. This is not an arcane legal technicality. Earlier this year, this precedent was cited by a Hennepin County trial court as it dismissed a lawsuit to overturn the statute banning same sex marriage.  Minnesota is unique among states in regard to the extent our same-sex marriage ban is deeply embedded in case law. As compared to the legal status quo, a constitutional amendment is clearly unnecessary, and brings forth questions about the political motivations of its proponents.

At the national level, one can’t but help to look to California’s legal battle over Proposition 8. In 2008, the voters of California approved a constitutional amendment banning gay marriage, which had the effect of closing a brief window during which gay and lesbian people were permitted to marry same-sex partners in California.  A federal court found Prop 8 to be unconstitutional last year but the ruling was stayed pending appeal that will almost certainly be forthcoming.

The reason I am mentioning California is that the court ruling overturning Prop 8 made some very compelling findings of fact. Among these finds are (emphasis is mine):

(Attribution: findings quoted above from Wikipedia article on the ruling, which cites each finding back to the court ruling.)

This case is about a California law, and may not have direct bearing on the ultimate outcome of a Minnesota constitutional amendment to ban same-sex marriage. However, each of these findings is intuitively true and therefore highly relevant. Further, a same-sex marriage ban is unjust. It unfairly targets gays, lesbians and their children for exclusion from the tangible and emotional benefits of companionship that, as we’ll explore next, is a sacred part of creation.

As my rabbi taught recently, as Jews we affirm that every person is created in the image of God, and as we say in the Sh’ma every day, God is one. The natural extension of these two foundational elements of faith and tradition leads us to know that our connection to the Eternal One is inextricable from our connections with one another.

We also have a collective responsibility to honor and respect creation, and the Torah’s telling of the Creation story brings an interesting and perhaps surprising perspective to the question of marriage equality.

Jay Michaelson, a Jewish activist and scholar, visited Minneapolis in April and shared his views on the religious case for gay equality, with a particular focus on marriage. “The first, fundamental problem that God sees in creation is the problem of aloneness,” Michaelson said.  “After saying everything is good — the sky, the earth, the trees — suddenly God says, in Genesis 2:18, that ‘it is not good for a person to be alone.’  And so God sets about creating a companion for Adam.  Not a biological reproductive unit, mind you — a companion.

“Of course, Adam and Eve are the fundamental couple in the Genesis story, and they are heterosexual.  But Adam and Eve are the solution to a problem: the fundamental problem of aloneness.  So how do we understand this teaching today, now that we know that for about 5% of the population, that problem can only be solved by a person of the same sex?  The teaching holds: it is not good to be alone — and it is very good to be in a loving, committed partnership.  For most people, that partner will be of the opposite sex.  For some, the same sex.  But the religious value is the same in both cases: love heals the first flaw God finds in creation.”

In Michaelson’s upcoming book God vs. Gay?: The Religious Case for Equality, he analyzes the texts that are often used to condemn homosexual behavior and concludes, “there is no contradiction between these narrow prohibitions and the religious value of love.  None whatsoever.”

If we are to honor creation and our ties to all people, then we must recognize the inherent sacredness of all loving companionship. To establish laws that explicitly exclude one group of people from forming socially validated relationships – marriage – is to dishonor creation.

What You Can Do

When a democracy faces critical decision points, it is incumbent for all citizens to become involved. Here are a few simple suggestions on how you can engage with the issue of marriage equality.

Educate yourself on the issue of marriage equality and what is happening in Minnesota and nationally. Here are some resources to get started with:

Project 515: A Minnesota organization with a mission of working to ensure that same-sex couples and their families have equal rights and considerations under Minnesota law.

The Religious Action Center of Reform Judaism:  A summary of the Reform movement’s position on GLBT equality, including marriage equality.

Call your state senator and state representative now to urge them not to write inequality into Minnesota’s constitution. Talk to your friends and family and urge them to do the same thing.

Any of the organizations identified above can make great use of your time or financial support to further the cause of marriage equality.