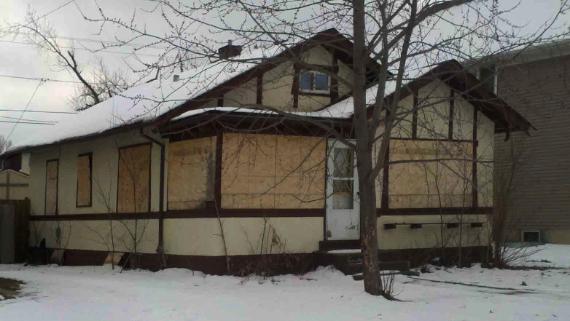 Two deaths, dozens of injuries, hundreds of families displaced, thousands of trees lost and millions of dollars in damage. These numbers only begin to describe the effects of the tornado strike on May 22, 2011. Residents of Jordan, Folwell and Webber-Camden were among those most affected along the tornado’s 3.5-mile path, and it is in these neighborhoods where the storm’s destructiveness remains most evident two years later.

Blue tarps continue to dot the landscape, covering roofs that have gone unrepaired. Vacant homes with boarded-up doors and windows stand as testament that many displaced residents have yet to return. And streets once shaded by a canopy of overhead leaves are now exposed to sunlight, their decades-old trees destroyed during the storm.

Despite these and other lingering reminders of the tornado, there has been a great deal of progress in recovery efforts on the Northside. Year one efforts to reconstruct homes, businesses and infrastructure have been sustained throughout the past year, buoyed by City of Minneapolis initiatives, community development campaigns and residents’ resolve to rebuild neighborhoods.

“The tornado of May 22, 2011, ripped off our roofs and peeled back the raw reality of our economic vulnerability, but we stood,” said Chad Schwitters, executive director of community development organization Urban Homeworks. “We stood shoulder to shoulder in the rubble after the storm and worked tirelessly alongside each other, fueled by hope, and joined by the generosity, hands and hearts of people from all over the metro, state and region.”

While the majority of the 3,700 properties to sustain storm damage were repaired in the first year after the storm, including 96 percent of those classified as having “major damage,” the second year following the tornado has also brought extensive progress. Updated property repair numbers from the City of Minneapolis are not expected until the end of the month, but Housing Director Tom Streitz says there has been and remains a strong commitment to the Northside. He noted in particular the City’s role in obtaining state assistance for homeowners, helping affected individuals secure loans to fix damage, and working with the Department of Commerce to expedite residents’ claims with state insurers.

“I think we’ve seen a ton of progress,” Streitz commented. “There are still some blue tarps out there, but largely those are related to people who . . . don’t respond to repeated inquiries. The large majority of people who are active and in their homes have been assisted and connected with insurance. So I think the progress has been very good.”

In many instances, homes sustained so much damage from the storm that they had to be destroyed. Roughly 50 homes were demolished in the tornado zone, with open lots left in their place. One civic project designed to address this issue is Green Homes North, a city initiative to build new homes on vacant lots throughout the Northside. Streitz said the initiative will result in 100 new green homes in North Minneapolis neighborhoods, with construction on the first buildings set to begin in May.

Business owners were also among those affected by the storm. Streitz spoke about efforts to aid retailers while maintaining a focus on increasing housing and building strong communities, including at the intersection of Penn and West Broadway where the Broadway Liquor Outlet was destroyed. “They are in the final stages of putting together their financing through the city to rebuild the liquor store,” Streitz said, adding that more than 100 units of housing, additional retail space, restaurants and other amenities are also to be included at the site. The development is expected to open next year. Another mixed-use complex with housing is planned for West Broadway Curve. “We are very optimistic,” Streitz concluded. “We believe that we’ll have more housing units in 2015 than we had before the tornado.”

While the recovery is well underway in North Minneapolis, some people see continuing challenges in redeveloping affected areas while maintaining the fabric of local neighborhoods. Chad Schwitters notes, “The tornado recovery, the housing recovery and the economic recovery are bringing about low vacancy rates, rising rents and firming home values . . . and looming “get-rich-quick” real estate investors and real estate investment trusts poised to buy hundreds and thousands of houses in our neighborhoods.” Schwitters prescribes a form of community-conscious investment that accounts for the wishes of current Northsiders.

Despite the occurrence of past difficulties and the likelihood of additional challenges, the redevelopment process in North Minneapolis has yielded many victories on both personal and public levels. That does not mean, of course, that residents have forgotten the tornado or that they now feel immune to its effects. The psychological costs, including trauma from the event itself as well as what followed, have not been recouped, nor can they be. As the vanishing of 6,000 boulevard and park trees has transformed the exterior landscape, so too has something been altered in the community’s collective consciousness. Before May 22, 2011, many had the sense that a major tornado could not strike this metropolitan area. Now everyone knows that one can, and many have experienced firsthand difficulties resulting from that reality.

One very symbolic and practical effort to persevere is the replanting of trees in the community. In the autumn following the tornado, the Minneapolis Parks and Recreation Board (MPRB) planted 275 replacement trees in Folwell Park. Last year, 3,100 trees (8-12 ft. in height) were planted in Northside areas affected by the tornado. MPRB has enlisted the help of residents by asking those living near new boulevard trees to water them once a week. The nonprofit organization Tree Trust (treetrust.org) has also contributed by offering free trees to Northsiders looking to replant.

“The recovery continues,” says Chad Schwitters. “As a community we ‘milestoned’ our one-year recovery and recognized the progress and the remaining pain. As another anniversary rolls around, we can’t diminish the remaining challenges faced by many, but we also must celebrate how far we’ve come.”