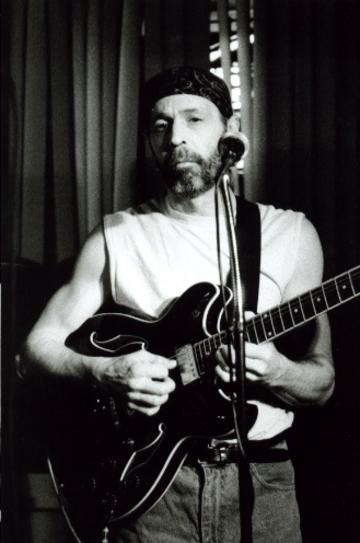 There’s no definitive word as to whether guitartist-vocalist Mark Martin is still part of San Francisco style rockers Inukshuk Pass. If he’s moved on, it can’t be but so far. When the premiere blues specialist did a solo set March 8, in a Wild Tymes’/The Palace Stage showcase in downtown St. Paul, IP powerhouse vocalist-songwriter Patti Ryan and bass ace Paul Weyandt made sure to get there on time, kicking the Willie-Bobo with Martin and hanging around to congratulate him afterward.

Which was called for. We don’t know what his status with the band is but
one thing without question, he burned all four walls off the joint. To band-in-a-can accompaniment, prerecorded, bass and drums. Frankly, I’m not disposed to that kind of thing. But it worked. Found out later why: that was him playing bass and drums. If he got the evening on tape, it will make for one hell of a recording, more than likely, according to how it’s marketed, sell like tomorrow’s news.

The guy’s steeped in Chicago blues by way of southern rock: hell of a combination. One he pulls off with signature execution. His finger work on the frets is fluid, lyrical and, every time out, cooks fresh as a breakfast of eggs, bacon, toast and grits. Martin played one original, an exquisite composition “The Pain.” The rest of the set was an incredibly eclectic tour de force. He drew on songs like Eric Clapton’s “After Midnight”, Bill Wither’s “Use Me,” The Soul Survivors’ “Expressway To Your Heart” , and The Temptations’ “Standing On Shaky Ground.” Taking each and every one of them straight on down Martin’s own road to soulville. He played and sang with characteristic fire—articulate, passionate licks and riffs, raw-edged vocals that go down smooth as good whiskey. For my money, he leads the Twin Cities blues field. Barring absolutely none. Yes, that includes, sue me for sacrilege, a whole bunch of big local names.

I suppose this is a good a time as any to put in a disclaimer. I’ve opened for Inukshuk Pass and been backed by Martin.

None of which changes the fact. Mark Martin’s solo debut killed. In cold blood.