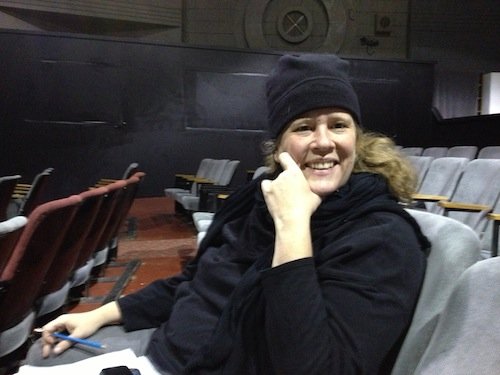 Carry On: A Requiem for 20 Years, Barebones Productions‘ Halloween pageant, takes a look at the grieving process in a way that’s not all sad, but rather “as majestic and funny as all our other shows,” according to co-director and long-time Barebones artist Maren Ward.  Barebones Productions celebrates its 20th anniversary this fall with its annual outdoor pageant, co-directed by Ward and Barebones co-founder Alison Heimstead.

Ward describes the beginning of Barebones in 1994. Heimstead, who had worked with In the Heart of the Beast and their MayDay Parade, decided that for her Senior Thesis at the University of Minnesota where she was studying sculpture, she’d create a Halloween pageant as a kind of seasonal counterpoint to MayDay. The show was called Sam Hain’s Flaming Pavement Puppet Show, and was so successful that a group of people including Julian McFaul and Mark Safford got together and decided to do it again a second year.

Ward watched it the first year, and the second year “ran around in a skull mask,” she said. The third year, when Barebones was actually founded as a nonprofit, they presented a Halloween show called Hullabaloo, which directed by Julian McFaul, and Ward stage managed. As someone with a theater degree from Macalester College, Ward was able to use her background to bring minimal tech and organization to the show.

Carry On: A Requiem for 20 Years runs October 26- November 2 at Hidden Falls Regional Park. The first half of the run is followed by music by the Brass Messengers, with The Poor Nobody’s playing after the shows on November 1 and 2. Shows begin at 7 p.m. Suggested donation is $5-20. Weather cancellation hotline: 415-640-2116 after 3pm on performance dates.

The early years of Barebones also saw the introduction of the idea of ritual theater, as well as pagan stories and lore, introduced by artists Jessica Braun-Ferris and Crystalline Ruby Muse. Psycho Sluts and other musical groups also collaborated.

Over the years,  hundreds of artists have worked with Barebones, from Lindsay McCaw’s old timey music and cartoony puppets, to Arwen Wilder, who’s been hugely involved in the choreography, and Soozin Hirschmugl.

Ward began co-directing for about 10 years, starting in the late 1990s,, before moving on to being a performer in recent years. “I’ve always considered my director role as supporting the other lead artist and the other creators,” she said. Throughout that time, there was a lot of crossover with In the Heart of the Beast, where Heimstead and others also worked, as well as with Theatre Galumph and Bedlam, which shared a space with Barebones.

The crossover between Bedlam and Barebones was very strong in the early years, according to Ward, because they shared a space and there were a lot of artists working on both projects. “There was a lot of similar philosophy and aesthetic and community support,” she said. That collaboration still exists to a certain extent, though not to the same degree, she said, because they don’t share a space anymore.

Ward was one of the founders of Bedlam Theater, and acted as co-artistic director for many years. She recently has taken a step back, and isn’t involved in the day to day operations as the company goes through its transition period and build out in Lowertown. Right now, she’s running zAmya Theater Project, which creates plays by and about people living in homelessness. zAmya became a program of St. Stephens a few years ago.

Ward says the community-based aspect that’s always been a part of Barebones shows has informed her work at Bedlam — especially projects such as the West Bank story, where Bedlam did a lot of interviews and story circles of people who lived in the West Bank, creating a piece of theater by and about the community. After doing that show, Ward went on to study at the Cornerstone Theater, in Los Angeles and has done other community-based training at the University of Minnesota and at the Theatre of the Oppressed conferences here in the Twin Cities.

Barebones, like Cornerstone, is all about defining a community, Ward said. Anyone who wants to participate is welcome, and the company provides a hands-on, volunteer-based experience. Recently, Ward says Barebones has had internal discussions about how to increase the accessibility of the work. “Now it’s an open door,” she said, “but it’s not a lot of going out and telling people the door’s there.”

This year, Ward returns to her directing role with Barebones, co-directing Carry On: A Requiem for 20 years with Heimstead. This year’s show came out of a place where lots of the lead artists had had significant losses in the last year or two years, Ward said. “There’s lots of ideas and stories and images that came out of a place of intense grief,” she said. 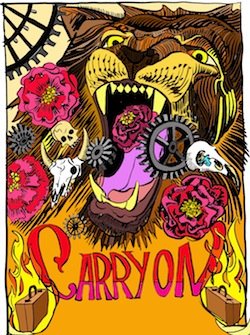 One of the source materials for the show is a book called The Monster Calls by Patrick Ness, about a boy whose mother is dying. The boy gets visited by a monster, a gigantic tree troll, who tells the boy stories and encourages him to express his feelings.

Though the Barebones show isn’t an adaptation of the book, there is a grief monster in the play, and Soozin Hirschmugl has made a gigantic tree troll puppet that comes forward to help get the grief out.

Another artist explored the need or desire to surrender, and started to build a scene around surrendering to the grief monster. A group of mourners have “grief cases,” suitcase shows that tell a story about their loss, Ward said.  Losses include environmental losses or a lost relationship or the inability to have children, and one performer who has lost a leg.

Ward said she enjoys working in surreal and absurdist work. “Anything that is a little off kilter.” Barebones has informed her aesthetic, helping her to appreciate big spectacle moments and “low tech magic.” In addition, she said the Halloween show has helped transform her relationship with death, so that this past year when she lost her father, her repertoire of holding on to death carried over to her family, so that her sister and mother looked to her to have the capacity to hold it. “That has totally to do with Barebones,” she said.