The movement to hold Wall Street accountable for tanking the U.S. economy spread to downtown Saint Paul, as more than 100 delegates to the Minnesota Nurses Association’s convention marched Tuesday to raise awareness of the union’s plan to “heal” Main Street with a tax on Wall Street. The nurses marched along Wabasha Street during rush hour, carrying banker-themed Halloween masks and signs supporting National Nurses United’s plan to rein in Wall Street, dubbed The Main Street Contract for America.

Put forth by National Nurses United, the nation’s largest nurses’ union, the Main Street Contract’s centerpiece is the Financial Transaction Tax, a 0.5 percent tax on Wall Street trades. Nurses say such a tax would help curb the reckless, computer-driven trades made by bankers seeking high-volume, short-term profits in 2008, contributing to the country’s financial meltdown.

The transaction tax could generate as much as $350 billion annually. Nurses want to see that revenue invested in public services – like health care coverage for the poor – and job creation. 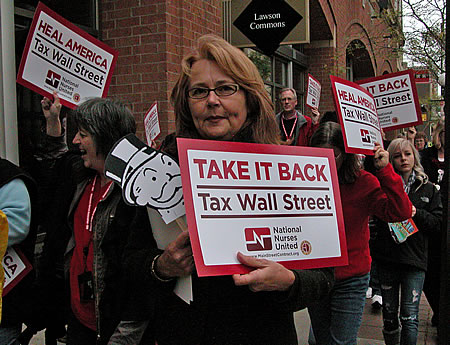 By demonstrating in Saint Paul, the nurses added to the growing chorus of voices calling for greater scrutiny of the powerful role Wall Street banks and other giant corporations play in the U.S. political system. Marchers chanted, “Trick or treat, tax Wall Street!” and “They got bailed out, we got sold out!”

A week earlier, the Minnesota Nurses Association officially endorsed the Occupy Wall Street actions spreading to cities across the U.S., including Minneapolis.

“We applaud the commitment, savvy and sacrifice exhibited by the multitude of students, union members, clergy and many others from all walks of life who have come together to loudly and clearly place the blame for the nation’s pain where it belongs,” the MNA said in a statement. “Wall Street caused the financial crisis, and we share the growing demand that Wall Street pay us back.”

The MNA represents more than 20,000 nurses in Minnesota, Wisconsin and Iowa.