The seven-county metro has been the epicenter in Minnesota’s foreclosure crisis, with Hennepin County and sections of St. Paul continuing to struggle.

With 536 foreclosures as of late June, St. Paul is still feeling the housing crisis, especially on the Eastside and along the I-94/University Ave corridor. That brings Ramsey County’s total foreclosure sales through June 21 to 864, according to its Department of Property Records and Revenue. Relative to the rest of the metro, Ramsey County is in a little better shape, as we pointed out in last month’s three-part foreclosure series.

As of July 6th, Hennepin County had seen 2,340 sheriff’s sales so far this year, with 811 in Minneapolis, according to the Hennepin County Sheriff’s Department. Southern suburbs Richfield and Bloomington have amassed 75 and 140 foreclosures, respectively. Western suburbs have also taken a moderate hit. Plymouth and St. Louis Park each have seen around 80 foreclosures this year and Maple Grove has seen 129.

The biggest story, however, lies in northern Hennepin County. 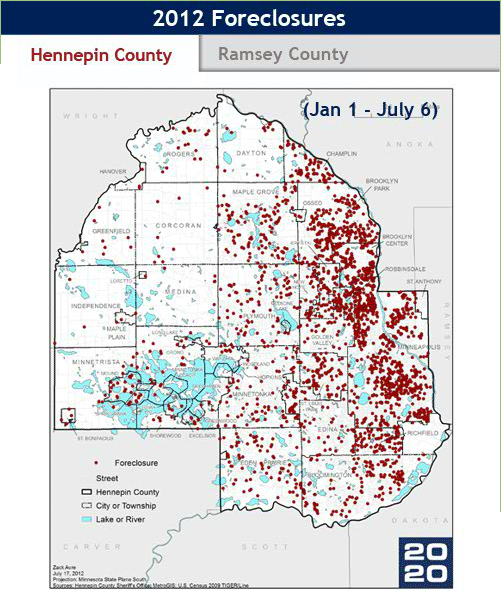 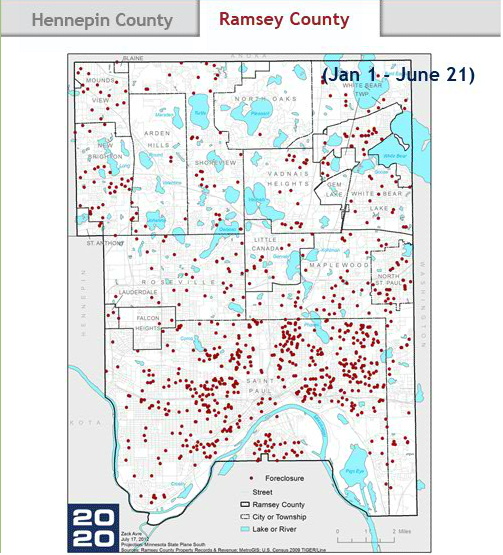 There is a spatial trend behind these numbers. The nature of Twin Cities housing submarkets sheds light on the matter. Housing submarkets in the metro follow a sectoral model of development, with each sector extending outward like a spoke from the city core.

Working class submarkets are traditionally located near employment and, because housing is usually viewed as shelter, emphasize current consumption. Consequently, these submarkets are fairly stable in new construction and turnover, expanding only to accommodate increasing population, and retain a more traditional neighborhood setting. An example of a working class submarket is the Minnehaha Ave corridor in southeast Minneapolis.

As I explained in “Foreclosures’ Hardest Hit Communities,” working class and low-income areas have been hit especially hard in the housing crisis in large part to predatory lending.

Upper class submarkets are even more stable than working class sectors and have been less impacted by the housing crisis. These areas are relatively slow in expanding, since homeowners are able to buy what they want the first time around. The southwest Lake District, home to affluent professionals and industry leaders, falls into this category.

Middle- and upper-middle class submarkets, on the other hand, are highly dynamic. Many homeowners in these sectors view housing as an appreciating asset. What’s more, they generally have access to credit and experience regular increases in income and wealth.

For these residents, socioeconomic mobility means geographical mobility. As homeowners move up and out, new homeowners take their place and the chain of succession continues. In a great sense, these submarkets signify the remnants of the American Dream.

These submarkets can be found south and northwest of Minneapolis and in St. Paul’s Eastside and Como Park neighborhoods.

During the housing boom, the middle- and upper-class sectors greatly expanded. Homeowners were able to build their assets and keep buying up and out. Yet, this rapid growth came with a heavy price.

The imprint of the resulting foreclosure crisis in these sectors is readily visible. Neighborhoods riddled with foreclosed homes extend from south Minneapolis out to Bloomington, from Near North Minneapolis out to Maple Grove and Brooklyn Park. While less concentrated, the trail of foreclosures in St. Paul from I-94 north through Como Park and from Dayton’s Bluff out toward Maplewood reflect the same trend.

Housing submarkets help explain the spatial pattern of foreclosures, yet foreclosures happen in all types of communities. This is not an urban problem or a suburban problem.

Foreclosures are a collective problem. They cost us all and have devastated neighborhoods, schools, local governments, and businesses in communities across the Twin Cities and Minnesota.

Moving forward, we must not only reform housing policy to prevent a repeat housing crisis but also protect the individuals who have been caught in the current storm. Working with homeowners to refinance mortgages and access loan modifications will keep valued community members in their homes and support economic and community health, instead of letting a sea of vacant homes drown our neighborhoods.

Defending Minnesota homeowners in their time of need will strengthen our communities and keep our state moving forward.

Special thanks to Kris Kujala at the Ramsey County Department of Property Records and Revenue for providing county foreclosure data.