This is the first in a three-part series examining Minnesota foreclosure rates. Read parts two and three.

While this represents a 9 percent increase from April, remember April 2012 saw the lowest monthly foreclosure filings since June 2007. Overall these most recent numbers still represent a 4 percent drop in foreclosures from the previous year.

“It’s going to be a bumpy ride down to the bottom of this foreclosure cycle,” says RealtyTrac CEO Brandon Moore.

This news begs the question, what does current foreclosure activity look like across Minnesota?

Take a look at this map: 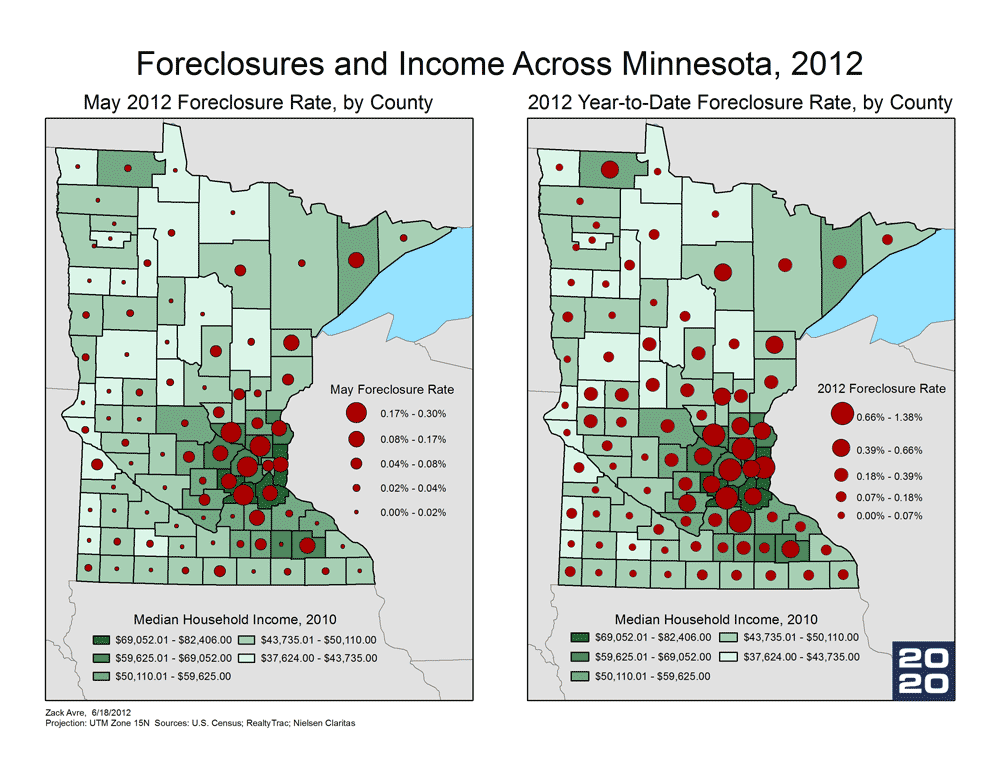 Overall, Minnesota had a statewide foreclosure rate of 0.11% in May, below the national level of 0.15% but only a slight improvement from April’s rate of 0.12%.

However, in the metro, May foreclosure rates are well above the statewide level. In fact,with the exception of Ramsey County, Anoka, Washington, Hennepin, and Scott Counties currently lead the state in year-to-date foreclosure rates, with respective rates above 1%.

This trend extends outward from the Twin Cities, as well. Sherburne and Rice Counties are quickly approaching the 1% threshold for the year.

When foreclosure rates are juxtaposed with median household income, a potential association appears between the two variables. Further analysis shows that a significant, strong correlation exists at the county level.

Moreover, these variables seem to hold a causal relationship. Bivariate regression analysis reveals that median household income in 2010 can explain 61% of the variation in May foreclosure rates and 56% of year-to-date foreclosure rates at the county level. Both of these numbers are statistically significant.

With most of these foreclosures concentrated in the suburbs, much of this relationship can be attributed to private lending practices and other public policy that stimulated rampant growth and created an artifically strong housing market. While increasing access for homeowners, these practices often meant middle to upper-middle income households were buying homes they could not actually afford.

Although these results are enlightening on the county level, they mask the foreclosure story at the subcounty level.

In the coming days, I will dissect the state of foreclosures in the Twin Cities metro area for a more nuanced picture of where the crisis is hitting the hardest. Stay tuned for Part 2 tomorrow.