As we saw in part one, the Twin Cities seven-county metro has borne the brunt Minnesota’s foreclosure crisis. Today, we examine Hennepin and Ramsey Counties.

This is the second in a three-part series examining Minnesota foreclosure rates. Read parts one and three. 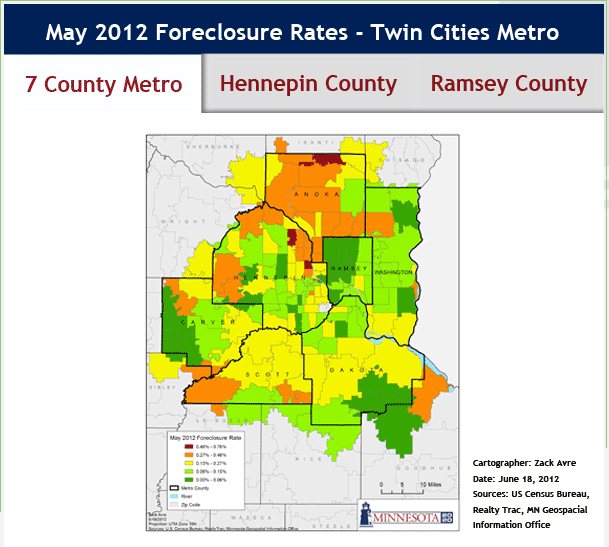 The northside neighborhoods of Near North and Camden saw foreclosure rates of 0.36% and 0.59%, respectively, totaling 200 and 300 foreclosures year-to-date, according to RealtyTrac.

The impact extends beyond family stability. Last October, Neighborhoods Organizing for Change revealed that the housing crisis has cost Minneapolis Public Schools over $150 million in state funding due to nearly 58% of households being forced to move out of the district.

There has been work to counter these trends, however. Occupy Homes MN has worked to stop foreclosures and evictions in North Minneapolis and across the city over the past year. In fact, its first foreclosure campaign partnered with North Minneapolis resident Monique White.

While faring better than Hennepin County, Ramsey still felt the bite of the housing crisis.

In May, Ramsey County had a foreclosure rate of 0.08%, below both the Minnesota and national levels. However, above-average foreclosure rates dominated the eastern third of the county.

Dayton’s Bluff, Payne-Phalen, and other neighborhoods on St. Paul’s East Side, felt the greatest impact with a May foreclosure rate of 0.18%. While below April’s rate of 0.26%, this area is still disproportionately hurting from the housing crisis.

Much of this area’s woes, which encompass the 55106 zip code, can be attributed to predatory lending practices.

The East Side of St. Paul received the “highest number of costly subprime loans before the mortgage market collapse and now suffers from the largest stock of vacant homes,” according to a May 2012 study by ISAIAH.

Like North Minneapolis, most of the East Side’s residents were first-time homeowners looking for a path to long-term economic stability. These are the type of homeowners we need to protect during the recovery.

As the Twin Cities recovers from the housing crisis, it is essential that targeted investment and assistance reaches these communities to not only establish housing security but also ensure long-term community stability.

Tomorrow, I will turn my attention to the rest of the metro for the final installment of the foreclosure series.