In parts one and two, we examined foreclosures rates across the state, with a specific look at Hennepin and Ramsey Counties. Today, we’ll analyze the rest of the Twin Cities metro.

This is the third in a three-part series examining Minnesota foreclosure rates.

When it comes to foreclosure rates, Anoka County is hurting most, accounting for over 12% of foreclosures in Minnesota this year, while comprising only 6% of the state’s total population. Its May 0.31% foreclosure rate doubled the national level and nearly triple the state level. More importantly, it’s year-to-date foreclosure rate now stands at 1.37%, just 0.5% shy of its rate for all of last year. 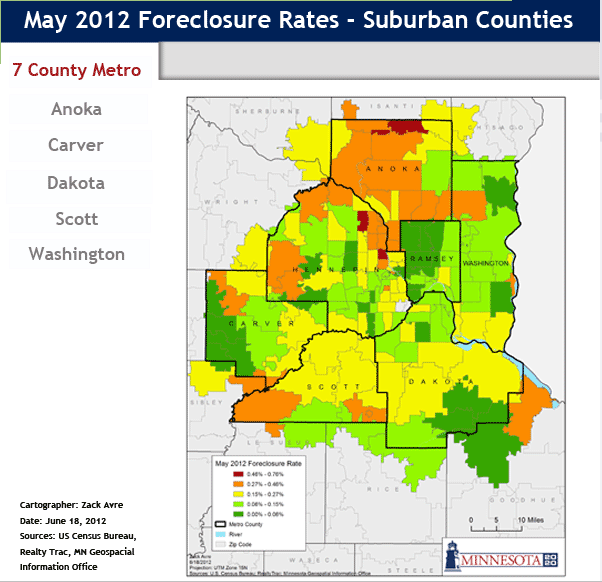 Scott County also had a rough May, with a 0.21% foreclosure rate. Belle Plaine and Elko New Market were hit hardest, with every community above the statewide 0.11% average.

Moving northeast, Washington County had a foreclosure rate of 0.17%. While doing relatively well compared to the entire metro, three-fourths of the county had foreclosure rates above the statewide levels, with Lakeland, Cottage Grove, and St. Paul Park seeing the highest rates.

Carver County, on the other hand, has not felt the same impact as its metro neighbors. Although its 0.15% May foreclosure rate was the sixth highest in the state, Carver’s year-to-date rate is comparable to statewide averages.

Its highest foreclosure rates were in its far northwest, exurban communities, with above-average foreclosures in Chaska and Chanhassen.

Dakota County also appears to be doing relatively well in 2012, as the only metro-area county with a year-to-date foreclosure rate under 0.5% and below statewide levels.

Still, parts of Dakota County continue to struggle. Some communities, like Farmington, saw rates as high as 0.26%.

When discussing foreclosures in suburban communities, one aspect that is often overlooked is the dramatic rise in homelessness. Across the metro area, homelessness, especially among adolescents, is at an all-time high and growing.

Though foreclosures vary across the state and metro area, policy action is needed to stabilize Minnesota families and communities.

Keeping homeowners in their homes by working with them to refinance mortgages and attain loan modifications will do more to ensure economic and community health than simply letting homes lie vacant and forcing community members out of their neighborhoods.

Foreclosures do just affect individual households. They have serious ramifications for neighborhoods, schools, local governments, and businesses across communities. If we hope to recover from the housing crisis as a nation and a state, we must think about and work on this issue collectively.