Minnesota has two categories of cities; ones that have experienced a significant increase in cultural diversity, and ones that will soon experience this, according to the League of Minnesotan Cities. The Diversity Index—a 100-point scale—jumped from 22 in 2000 to 31 in 2011 in the state. As Minnesota communities become more multicultural, so do our schools.

The maps below show just how diverse Twin Cities area school districts are. While the most common primary language spoken at home is English, these maps show the top two foreign languages spoken throughout homes in each school district. 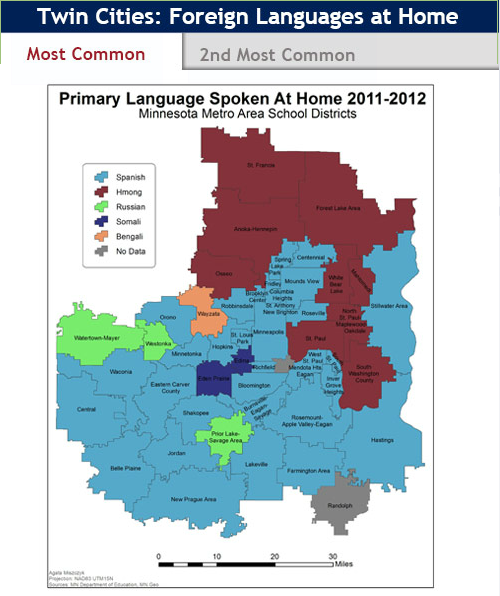 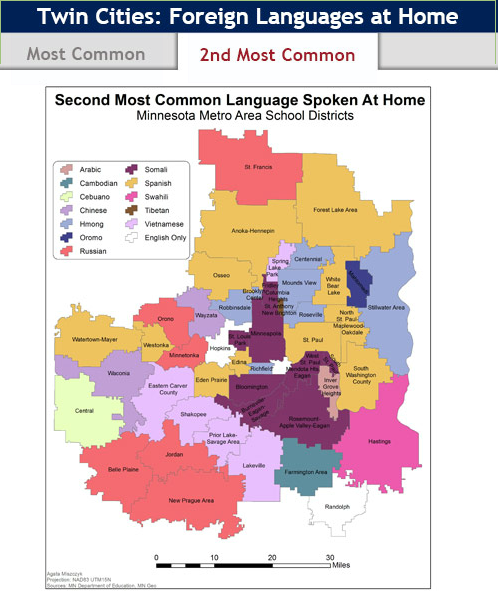 Unsurprisingly, the map shows a large Spanish speaking and Hmong population in the metro area. In 2010, Richfield and West St. Paul had some of the largest Hispanic populations. Almost 35% of Richfield students reported that they spoke Spanish at home, which is the most predominant foreign language in the metro area, especially in the south and southwest metro.

Hmong is the second most widely spoken foreign language. According to recent statistics, the Twin Cities metro boasts a population of about 64,000 Hmong residents – with 29,000 in St. Paul. The rest of the Hmong population has settled in northern suburbs as can be seen on the map. About 23% of St. Paul School District students reported Hmong as their primary home language in the 2011-12 school year.

More interestingly, some suburban districts are experiencing a growth in Somali and Russian populations. While Somali speaking students comprise relatively small numbers relative to Minneapolis, they still make up substantial populations in Edina and Eden Prairie at nearly 6%. In the past two decades, the US has admitted 84,000 Somali refugees, 40% of which live in Minnesota. This map also shows that Somali residents may be moving out of Minneapolis and into the burbs.

There is also a substantial Russian population in several west metro districts. Like Somali numbers, students speaking Russian at home do not rival Hmong or Spanish speakers, but Minnesota’s Russian population tops 12,000 (mostly Russian Jews). Recently, “the Midwest’s first charter school with an emphasis on the Russian language and culture” opened in Minnetonka. The school enrolls about 85 K-5 students.

The second map shows even more diversity, with languages such as Oromo (spoken in Ethiopia) and Cebuano (spoken in the Philippines). With the numbers indicating increasingly diverse student bodies, how could this impact education policies and curriculums? What do schools have to gain from a multicultural student body? Diversity presents Minnesota with challenges and opportunities, which we’ll discuss in the next installment of this blog.