Minnesota 2020 has removed this article from their website. Here is their statement:

We based the information for this blog on the Minnesota State Auditor’s ongoing monitoring of Minnesota county finances. The State Auditor’s report is an on-going fiscal oversight function, tracking local governments budgeting and spending decisions. Due to the report’s survey based data, it is not the best indicator of projected county surpluses and deficits.

For 20-days last year, Minnesotans got a taste of what conservatives’ limited government looks like—restricted commerce and recreation, halted road construction, and shrunken access to many important public services. The state government shutdown was a sobering reminder of the public sector’s critical role in our economy. Governor Dayton ended the shutdown to prevent long-term damage. 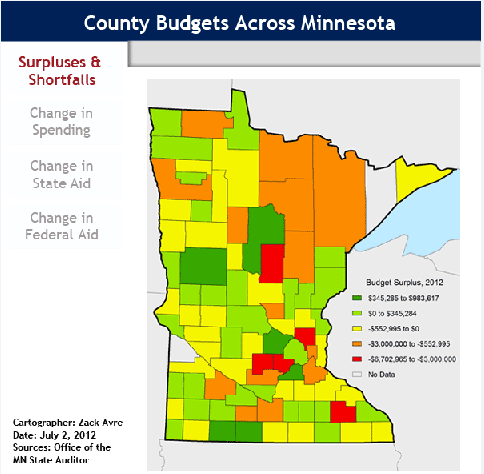 After a decade of “no-new-taxes” producing cuts to state revenue sharing with local communities, forty-nine counties face budget shortfalls this year, according to the State Auditor’s Office. Of these forty-nine, nineteen are over $1 million in the red for the year, with Anoka County facing the largest shortfall of $6.7 million. It resulted in significant funding cuts for streets and highways, sanitation, and human services.

In addition, shrinking property tax revenues in communities battered by foreclosures and reduced interest from investments have compounded state cuts.

Three-fourths of Minnesota’s counties saw reductions in state or federal aid from 2011 to 2012, with around one-fourth experiencing cuts to both.

Rock County was especially hard hit, seeing state aid shrink from $913k to $485k and overall revenue drop 13.5%. Forced to balance its budget, the county slashed a combined $1.9 million in human services and health spending. As many community leaders will tell you, balancing the budget is costly, with serious consequences for residents.

Additionally, budget cuts have forced widespread layoffs at the county and local levels. This not only impacts local economies but also degrades basic public services. Claims to trim fat don’t hold much truth after a decade of cuts, more often than not police officers, librarians, firefighters, and other essential public employees who keep cities and counties functioning face layoffs.

Leaving county government high and dry doesn’t make our state stronger. Instead of forcing their hand, we need to ensure that county governments, along with their municipal counterparts, can keep our communities functioning and adequately provide the basic public services from which we all benefit. Investing, not divesting, in our communities moves Minnesota forward.