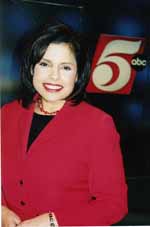 KSTP-TV morning and midday news anchor, Vineeta Sawkar, is a contributor. Being of Asian Indian decent, she contributes much to the Twin Cities’ Asian community. Being a top notch journalist, she has contributed greatly through her stories over the air and to such organizations as the Asian American Journalists Association (AAJA) and the Minnesota News Council.

She has been with Hubbard Broadcasting since 1995 and her contributions in reporting, interviewing and delivering the news are highly thought of. Happily married, she is a mother of a boy, Jack, who is five and a girl, Leela, two. Parenting and children make up a large part of her contributions — over the air, through schools and speaking engagements.

Vineeta’s career, you could say, actually started when she was a fifth grade elementary school student in Overland Park, Kansas and worked on her school’s newspaper writing articles and interviewing other students and teachers. “I thought it was really fun to be able to talk to people and report on what they were doing,” she says.

When she entered Junior High School she competed in speech tournaments which “combined my love of writing, reporting, and speaking.” Vineeta now had the perfect ingredients for a major market television news anchor; all that was left were a degree and experience.

Her degree came through a double major in Journalism and Political Science at Boston University — her experience through KXJB-TV in Fargo, where she served as reporter and weekend weather anchor and at WOWT-TV in Omaha as a reporter and fill-in news anchor. Then she came to that major market station — KSTP.

The station has been good to her, she says. “They’ve given me a lot of opportunities. I have made some excellent friends and worked with some very talented people over the years and learned a lot… I like the fact that it’s (KSTP) locally-owned; it’s not some big corporate conglomerate phoning you from New York or wherever. It’s people who are two floors above you who know what’s going on, know who you are and you’re not just a number. It makes a difference.”

Vineeta started at KSTP as a reporter in 1995. Three years later she was promoted to reporter and weekend news anchor. Last October she stepped up to early morning and mid- day news anchor. She starts awfully early — 3:30 in the morning but then gets to go home at noon and for the first time in 15 years she doesn’t have to work weekends giving her much positive time with her family. “Yea! Yippee! There’s a life on weekends, I’m enjoying it, I feel very fortunate.”

KSTP is also near her Saint Paul home and she doesn’t have to drive far to get to it. She likes living in Saint Paul with her husband Jason and their two children. Now that son Jack is a kindergarten student, she has nothing but praise for the Saint Paul Public School system. “The standards are so high and I think sometimes kids in public schools get a bad rap because they (the schools) do wonderful things and they are really teaching these kids at a higher level. I’m very impressed with what he (Jack) has been able to learn so far.”

Vineeta likes the teaching of diversity to kindergarten students. “I love the fact that he (Jack) is learning about Hmong tradition, and he is learning about Hanukkah, he’s learning about Kwanzaa, and he has friends who parents come from Thailand and he has friends whose parents come from different countries. I think that is an important part of education for my kids.”
Vineeta’s own heritage is an important part of education for her kids and all kids and adults too. She emcees many Asian events and has been active in AAJA since her stint in Omaha. She has served as Minnesota’s Chapter Vice-President for Broadcasting and was coordinator and moderator of the “I want a life” panel (balancing family with a journalism career) at the AAJA national convention in Minneapolis last August.

“I have a lot of respect for my parents,” she says. “They were born and raised in India, got married there and came to the United States with eight dollars to their name. My father is a retired oncologist — cancer specialist — and he worked very hard. My Mom took care of us, and to me it’s honoring my heritage, just continuing to work with Asian groups and to help them as much as I can.

“I love getting calls to emcee any Asian event, especially in the Indian community because I feel very grateful for what my parents were able to give me and about their backgrounds and I feel whatever I can give back to the Asian community is very worthwhile.”

Yes, Vineeta Sawkar, KSTP-5 Eyewitness News morning and midday anchor, is a contributor and her contributions are many and very worthwhile.