Above: Ricing on in Ojibwe country. Below: Kevin Fineday with his pick up truck and ricing canoe carefully mounted on top. (photos by Winona LaDuke)

It’s Manoominike Giizis, the wild rice making moon on a string of lakes in the heart of  Ojibwe country. There is nothing so defining of Ojibwe people, perhaps as the wild rice harvest, and this year looks to be a good one – the rice falls gently into the canoes, laughter sounds across the lake, and boats pull in with men and women full of rice worms and smiles.

Tamarac Rogers of White Earth watches two boys – my son and his friend – jump off the bridge at Mitchell Dam, and remembers when he did exactly the same thing as a young child, 50 years ago.

“They would leave us boys here to play while our parents and grandparents went out ricing,” he tells me. “We’d eat our lunches too early, and spend most of the time in the lake. I remember it was an old wooden bridge then, back in the day. There was an old birch bark canoe sitting there. No one used it for ricing, so that’s what us kids used to play with.”

Tamarac cleans the rice, carefully pulling the heads and grass out of the 400 plus pounds of rice he and his partner have hauled in from the lake. His wide brimmed hat shades his face as he moves his hands through the rice. He allows me to help a bit while I talk to him.

“Not many blackbirds on the lake,” he tells me. “Know what that means?” he asks, pausing.

“The blackbirds eat the rice worms. The rice worms only eat the milky rice – where it is not yet ripe, the green rice.”

I puzzle at what he is saying. He continues, “That’s how you know where not to rice, as the rice is green – watch the blackbirds”. I listen and ponder, finally nodding.

Scanning the landing at Mitchell Dam, it is not hard to get caught up in the enthusiasm. Young men and their older cousins or relatives are coming in from across the reservation – all having been among the lucky ones to draw a ricing pass to the coveted Mitchell Dam ricing area.

Two young Wadena men from Naytauwash,  Darren and Leroy (age l8 and 22) come in, canoe full of rice, beaming at their harvest – both for food for the family, and for some income in a flailing national economy, where jobs are scarce in the labor force.

Simon and George Rogers pose with the canoe they won earlier in the summer at the Great Anishinaabe Canoe race, beating out a couple of other men from White Earth, who after a promising first day, capsized their canoe.

“Would’ve been embarrassing to be beat by those half Lakota boys,” George said, laughing.

I mention he and his partner James Shimek were not dubbed likely winners, and he chuckles. “We were sort of like Seabiscuit weren’t we?”

The update on the rice from Height of Land where George and Simon have just pulled in from, “fought for every kernel. It was a hard fought battle”.

Mitchell Dam, a part of the Tamarac Refuge, was annexed from the White Earth reservation in the Collier Agreement of l935, with the promises that the US Fish and Wildlife would train young Ojibwe to work at the Refuge.

Elsewhere, some refuges (Bison Refuge in the middle of the Salish and Kootenai Reservation) are under consideration for co-management with tribes. The Tamarac access and history remains a source of contention with most of the traditional harvesters on the reservation. 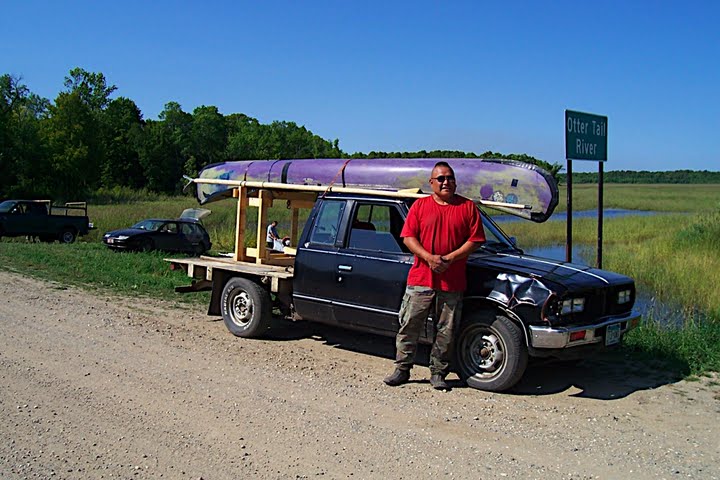 Kevin Fineday , meanwhile modeled his adapted pick up truck, ricing canoe carefully mounted on top. A Ponsford resident, he has riced alone since 1999. That is considered to be a great deal of work. He poles himself through the rice beds, and then knocks the rice. A broad smile crosses his face when he reminisces of all the years spent ricing.

Back at the Tribal Biology Department, 8000 pounds of wild rice are sitting on a trailer, headed out to parchers. The first l2,000 pounds apparently was sent off to Leech Lake for processing, and the next round is said to be going to local rice mills. There’s a great deal of excitement as ricers, young and old, pull into the Biology Department to get some hard earned cash.

The wild rice harvest is a time of great celebration and joy on the White Earth reservation, and indeed throughout the north. This “food which grows on the water” – a central part of the Ojibwe migration story – remains central to land, culture and way of life in Anishinaabe Akiing – this north country.