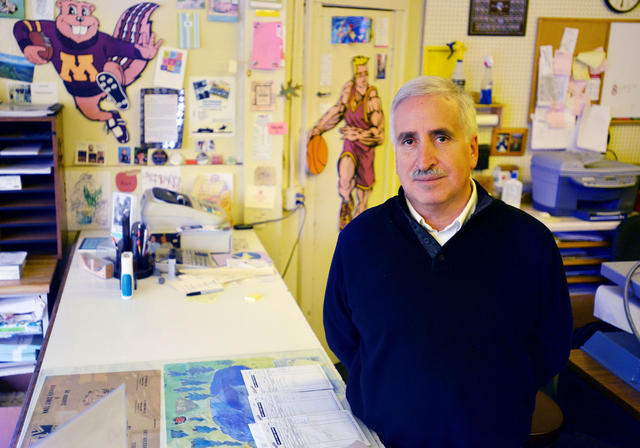 Skott Johnson, president of the Dinkytown Business Association, in his store Autographics on Nov. 12 in Dinkytown. (Daily File Photo by Emily Dunker)

From the window of Autographics Printing, Skott Johnson has seen Dinkytown move through several different eras. But recently he’s become more and more disheartened with each flashy, new apartment complex erected in the neighborhood.

“It’s not as fun as it used to be,” Johnson said. “We used to have 14 small businesses over where Sydney Hall is.”

As the president of the Dinkytown Business Association, the 58-year-old has been the figurehead of the campus hotspot for 18 years. But the arrival of developments like Sydney Hall, 412 Lofts and the University Technology and Enterprise Center project are making him think about moving on.

At the end of the month, the area will lose more than 90 businesses when the UTEC will be razed to make way for a 326-unit apartment complex next year.

Johnson has been DBA president for twice as long as his three predecessors combined. It’s a volunteer
position and often a thankless one, Johnson said.

“It’s become so involved that there aren’t many people who could be president. I’m gone 20 hours a week in meetings, workshops and God knows what,” Johnson said.

The position has its difficulties. He said other business owners often look to him for solutions to problems that are out of his control.

Still, Johnson said he likes to be involved in the community and uses what he learns in these meetings to help fellow business owners.

“Even 10 years ago, if you said ‘I live in Dinkytown,’ half the people in the metro did not know where that was,” said Greg Pillsbury, owner of Burrito Loco. “Now I think a lot more do. Part of it is the Gophers stadium and other things, but I think a lot of it has to do with Skott.”

An advocate for Dinkytown

Kristen Eide-Tollefson, owner of the Book House, came to Dinkytown in 1972, only a few years before Johnson.

Eide-Tollefson said she and Johnson don’t always agree on their vision for Dinkytown, saying hers is “more bohemian.” But she said Johnson is good at bringing the businesses together when it counts.

In 1999, there was a lot of discord between Dinkytown businesses, Eide-Tollefson said. Johnson spearheaded an effort to gather all of the business owners together for a portrait that would run in the Minnesota Daily as a holiday greeting.

“It was a really wonderful moment,” Eide-Tollefson said. “When the idea came up, [Skott] was really supportive, and he made sure everybody got together. It was pretty historic.”

Johnson’s advocacy for Dinkytown extends to its transient population as well.

When a citywide crackdown on panhandling and street musicians threatened some Dinkytown fixtures, Johnson advocated for the DBA to protect those who had been friendly to businesses.

Three years ago, Johnson stopped to talk to a teenager who was begging for change across the street from his business, Autographics, telling him, “you’re too young to be a bum.”

He bought the young man, Josh Caldwell, some lunch and gave him a job. Johnson eventually persuaded Caldwell to finish high school and get off the street. They still talk at least once per week.

“He’s one of the more important [people] in my life,” Caldwell said of Johnson. “He’s taught me quite a bit.”

Johnson was born and raised in Austin, Minn. He originally planned on attending community college in his hometown with his friends. But his father had his own plans.

He enrolled Johnson at the University and urged him to pledge the Sigma Nu fraternity, where he still serves as an adviser.

Johnson said he was angry at first, but he realized quickly that he loved the hustle and bustle of the city.

He graduated with a journalism degree in 1977 and hasn’t left Dinkytown since. He found work at Nelson’s, an office supply and copy shop that stood in Pagoda’s current location. When Nelson’s went out of business, Johnson opened Autographics in 1989, taking over many of Nelson’s old clients and the business of printing and copying in Dinkytown. 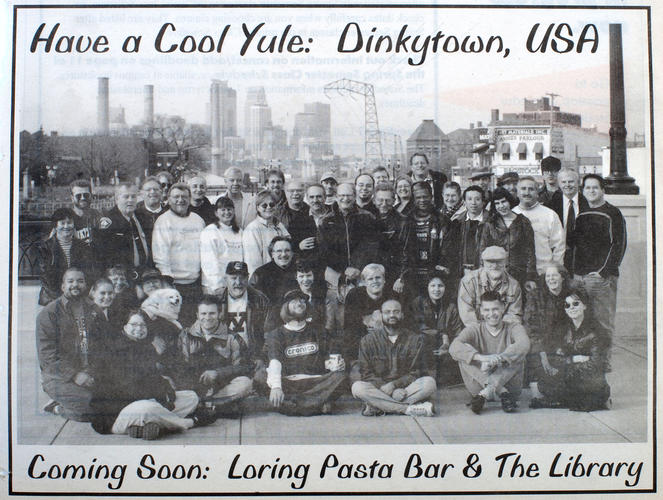 Dinkytown business owners published a holiday message in the Minnesota Daily on Nov. 20, 1999.

Johnson writes and paints in his spare time and said the views from Autographics and his downtown apartment provide plenty of inspiration.

“When I rode the bus here every day I would always see someone on the bus,” Johnson said. “I would observe them and write about what I thought their life was like.”

Although he loves city life, Johnson is also attracted to Dinkytown’s small-town feel. He said he likes how all of the business owners know each other and dislikes chains that he says are uninterested in getting involved with the community.

“He always tells me that back in the day … most of the businesses were Dinkytown Optical, Dinkytown Shoe Store, Campus Cobbler, Dinkytown this, Dinkytown that,” Pillsbury said. “He doesn’t want Dinkytown to look like the food court at the mall.”

Johnson said this close-knit feeling is disappearing with each newly built apartment complex, and soon his family demands might draw him away from the city for good.

Johnson’s father died two years ago, and since then he’s been traveling to Austin every weekend to care for his mother.

“I can stay here so long and then I have to get out,” he said. “I can see the stars in Austin. … The air smells sweet to me. You can smell the crops [as you’re] coming into town.

“There’s no sweet smell here in the city.”

Johnson is currently running Autographics by himself, so if he decides to move home he won’t have to let go of any student employees. Still, he said it’s a difficult decision.

“I’m strung between two places; I’m in Austin half the time and Minneapolis half the time,” he said. “I should probably give one of them my full attention.”