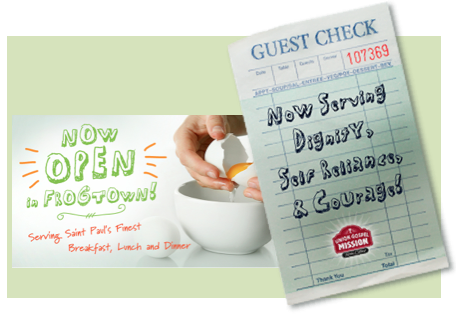 On a sunny Wednesday afternoon in late February, it was official—after months of paperwork and stress, Monica Spencer, a trainee in Frogtown Daily Diner’s vocational program, had moved out of the halfway house she had been living in for nearly seven months and into a sober living building on the East Side of St. Paul. That evening, when she got back from work at the Diner, would be the first time in seven months that she would not have to test in a breathalyzer to get a pass of approval from her supervisors. In fact, after her time spent in the prison system, it would be the first time in eight years that Spencer had not reported to authority figures before turning in for the night.

“I haven’t had time to enjoy it yet,” Spencer said, speaking from a table in the Diner after her work shift. “Today I just got up, went to work and I’m only just getting off now.”

Not that Spencer was complaining — she credits her time at the Daily Diner as an important part in a big transition she is making in her life.

“I really changed a lot over the last year,” Spencer said. “I have a background, I have felonies, I have been to prison. But I have started doing something different with my life and that is one reason I like the [Diner’s vocational] program — it gives people a chance who want to make changes.”

The Daily Diner’s vocational program began in August 2013, soon after the Diner itself opened in April 2013. Run by the Union Gospel Mission of St. Paul, a faith-based organization that provides services for people struggling with homelessness, poverty, and addiction, the program aims to provide work skills and training to help them become successfully employed.

Throughout the 12-week course, trainees learn every aspect of the food service, from hosting to dishwashing to working as a line cook, from the Daily Diner’s permanent staff. At the program’s end, trainees complete a 40-hour internship with one of the Daily Diner’s partner restaurants. Trainees may be offered a job by their host internship and if not, they will work with program staff to secure employment somewhere else — preparing with mock interviews, job search tips, and how to write resumes.

Jonathan Sasada, an alumni of the Diner’s pilot training course, said that this aspect of the program helped him to land his first job in the food industry. He has since returned to the Diner, where he primarily works as a cook, though he also fills in for hosts, food runners, and servers.

“I am basically the utility person,” Sasada explained. “The great thing about being trained here is that you know the ropes and can do any job.”

In the near future, Sasada will begin a new food service job — this one at Minneapolis’ posh Capital Grille. Sasada will start as an assistant server there, helping wait staff manage their large “sections.” Training for the job will take about two and a half weeks.

Sasada, 23, is considering returning to school in the future, and he also is considering ways to use the master’s degree in music he earned from the University of Minnesota. Though he has many options ahead of him, Sasada said that his Daily Diner training has been “valuable as a tool to always have a job.”

“The program opens up doors for me in an industry that will never ever go out of business,” Sasada said. “I can go to a restaurant now and say I can cook, I can host, I can serve — what do you want me to do? That will put me through school.”

Spencer looks to Sasada’s success as some hope that employment could be at the other end of her time with the Diner. Now that she is about half way through the program, Spencer is starting to looking ahead to the internship and the hope for a job afterwards. Spencer said that Mike Olinger, the Diner’s gregarious general manager, calls the end of the program “getting kicked out the nest” and she admits she thinks about in the same way.

“This place is so supportive. I felt that the first day I came in here. But a big part of the program is finding you employment, internships,” Spencer said. “But what if they don’t want me and I’m out of the job? Do I start looking now? I will have to tell whoever employs me that I am a felon, that I have a criminal background.”

“Jonathan [Sasada] says someone will pick you up. But I worry about it sometimes.”

Spencer’s apprehension is not unfounded. While Sasada found employment, another trainee did not secure a job after his 40-hour internship.

Spencer will leave the program with plenty of training, and not all of it in food service. Alongside the technical skills, trainees also learn life-skills from “Daily Devotions,” a daily scripture reading and discussion about how the lessons relate to everyday life. Olinger said that this practice, which he leads, is just another level of preparation for the real world.

“You learn that people come to this program with different issues, different barriers that they are dealing with,” Olinger said. “Part of our job is to help people to be self-sustaining. To do that, we need to be helping people to overcome their own challenges.”

Titles for these scripture lessons include, “Successful Attitudes,” “Minimizing Your Barriers,” “Making Decisions,” and “There is No ‘I’ in Team.”

The lesson “Why Work?” was Spencer’s personal favorite. For that day, she and fellow trainee Derek McHerron interviewed the Diner’s regular employees to ask them why they work at the Diner.

“I learned things I’ve really never thought about on the job before,” Spencer said. “For me, I have three kids, so all of my past jobs were about getting done, getting the paycheck, and getting back home to take care of everyone.”

“This is the first job that I have really cared about. I think it is because I know that I matter here, that if I have to miss a day of work or come in late it will make a difference in the way things run.”

Related story: Frogtown’s Daily Diner dishes up meatloaf and mashed potatoes, with dignity and sobriety on the side (Jeremy Iggers, Daily Planet)