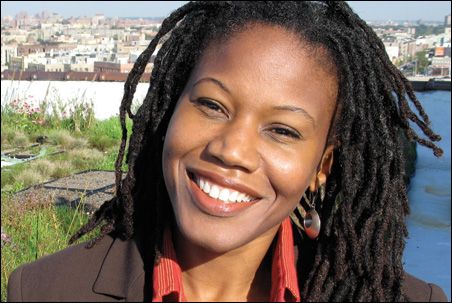 Majora Carter: "We believe in something we call hometown security.''

In the 1960s there was Rachel Carson and “Silent Spring,” in 1970 the birth of Earth Day and 20 million Americans demonstrating for clean air and water.

Today, there’s Majora Carter, who in these times of climate-change concerns, unemployment, hunger and homelessness – as well as government red ink – has done those earlier environmentalists one better. She’s taken on the mantle of both the environment and social justice.

Carter, who in the ’90’s jump-started urban renewal in the South Bronx and has been working to “green the ghetto,” is in town tonight to kick-off Momentum 2011, a new event series sponsored by the University of Minnesota’s Institute on the Environment.

Here with a persuasive message “You Don’t Have to Move Out of Your Neighborhood to Live in a Better One,” she’ll tell the tale of her transformation from artist and spoken-word performer back home in the South Bronx as a graduate student to community activist.

Like this comment from her made at Powershift in 2007, her presentation in Minneapolis will likely be provocative: “If power plants, waste handling, chemical plants and transport systems were located in wealthy areas as quickly and easily as in poor areas, we would have had a clean, green economy decades ago.”

From rabble-rouser she rose to game-changer to establish the Sustainable South Bronx, a nonprofit “environmental-justice solutions corporation,” as a way to bring both jobs and a healthier environment with cleaner air and green space to a community described as the poorest Congressional district in the nation.

Among her honors: being named to Essence magazine’s 25 Most Influential African-Americans and Fast Company’s 100 Most Creative People in Business and awarded a MacArthur Fellowship, nicknamed the “genius grant.”

Today she heads the Majora Carter Group LLC based in the Bronx and travels the world advising cities, foundations, universities, business and communities on how to muster their resources to do the same.

In her words, a short interview

I caught up with her by phone Wednesday night, thankful she could squeeze in a 10-minute interview as she settled into a Minneapolis hotel, to ask: How do people go about doing that?

“Every place I have been has its own version of the South Bronx,” she told me, meaning areas of higher concentrations of poor folks, people in and out of the criminal justice system, and children struggling with school.

“The idea is to really take a look at what your assets are, which basically revolves around the people that are there, the community leaders, businesses, municipalities and everyone in between. You really want to think: What is the needed goal, a happy healthy community? What drives are needed to create that?”

But given the Great Recession and all the budget shortfalls and the need to house and feed people, aren’t environmental needs toward the bottom of the to-do list?

Then the travel-weariness seemed to disappear from her voice as she made her point.

And somehow, she said, “there’s always money” for the sports stadiums and strip malls. What we need to do, she said, is create a quality of life that creates decent jobs and healthy lifestyles and quality schools.

“We believe in something we call hometown security.” That, she told me, is when you find local solutions to your really big problems, the “seemingly intractable problems.”

Problems like food and hunger and incarceration, she said.

You work, she said, “to create jobs for your most expensive citizens, the generationally impoverished and those in and out of prisons and those that are coming back from our wars. They require a huge amount of social service costs,” she said, citing “self medication,” issues around domestic violence and poverty, especially as it affects children and their education.

Jobs make the vital difference, she told me, going on to suggest employing those “most expensive citizens” with work in the climate adaption industry, such as urban forestry, green roofing and wetland restoration.

“When you have people doing that work they’re reducing municipal service costs” plus working to improve air quality and reduce public health issues, she said.

For instance, one promising project is evolving on the White Earth Indian reservation in northwestern Minnesota, she said, where tribal leaders are “working to impact food and energy security” by building windmills, and thus creating jobs.

Carter, who hosts a public radio series called “The Promised Land,” speaks at 7:30 tonight at the Ted Mann Concert Hall in Minneapolis at an event that includes conversation and entertainment. Tickets are available by phone and by going here.

Twin Cities-based Ananya Dance Theatre will present a performance from “Kshoy!/Decay!” – an artistic depiction of women of color being forced to relocate or evacuate from their homelands. Former WCCO-TV news anchor and MinnPost journalist Don Shelby will MC the event.

This is the first of three environment-themed evenings sponsored by the Institute on the Environment.