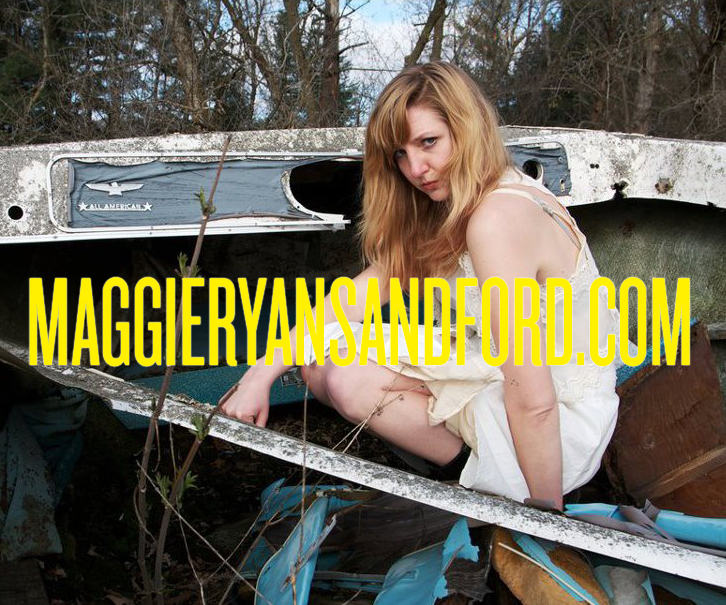 What’s your job?
“Freelance writer. Mostly humor and science, if that makes any sense: I’m a regular contributor to ComedyCentral.com, mental_floss, MPR’s All Things Considered, and this secret kickass site that hasn’t launched yet but is going to be totally righteous when it does. I’ve also written for mnartists.org and the A.V. Club (R.I.P.), I’m involved with Thirty Two magazine—buybuybuy)—and I write marketing copy, everything from scripts to social media. You hear that, All Companies? MAGGIERYANSANDFORD.COM.”

Other than your job, what are your claims to fame?
“I also write and perform fiction, which has appeared for far less money in places like Paper Darts magazine, the Indiana Review online, the Scientific Creative Quarterly—which is what it sounds like and everyone should read it—and radio/podcast stuff like mnartists.org‘s podcast You Are Hear, Powder Keg Live!, and Tales from the Poorhouse. Starting in September I restart performances with the Rock Star Storytellers at the BLB…and, let’s see… I’ve performed in Kevin Kling’s Storycraft Showcase at MPR, and one time I somehow won a Literary Death Match, which felt special. Oh, and most people don’t know that I have a sordid history as a sketch comedian in New York. I was in a four-person sketch group named after a W.C. Fields line, and we performed at the People’s Improv Theatre and the Upright Citizen’s Brigade, places like that. This is what you want, right? Me talking about myself? Such a blowhard. Anyway: I have a piece of political humor called ‘Unpublished Federalist Papers’ in the new McSweeney’s Book of Politics and Musicals, in stores now!”

What’s your relationship status? (We can leave this one out if you’d prefer.)
“Hey, yeah, leave this blank, why not. I like to leave an air of mystery in the SEXY dept. Plus my husband’s a hot commodity, so let’s let him stay that way. Wait, are you printing this?”

Where are you most likely to be seen?
“Turf Club, #1, fuhevah. Secondsies goes to the Triple Rock––if there’s no show, I’ll stay for the jukebox and the food. Besides that, I don’t know, like to mix it up a bit, get my adventure on, scope out some sod houses in southern Minnesota, pose in abandoned buildings for photographer Adrianne Mathiowetz, do John Jodzio’s Minnesota-Arts-Board-funded outstate reading series—next one: Duluth, July 28th. I also sometimes fill in as host of Chuck Terhark and Sean McPherson’s Trivia Mafia events, like the Drinkin’ Spelling Bee at the 331, or for the devilishly handsome Logan O’Neill, who runs trivia at the Tavern on Grand, Thursdays.”

Where are you least likely to be seen?
“Brother’s, downtown. Sorry. Any place where you can find a girl passed out with their head in the toilet and her thong around her ankles is grim in the uncool way.”

With whom are you most likely to be seen?
“Oh, man, do I have to choose? I feel so damn fortunate to hang with any one of the supremely talented, driven, socially conscious, intelligent, beautiful, degenerate, manic, depressive, hopelessly hopeful thinkers, ruffians, art makers/doers/lovers in this town I couldn’t drop just—another—single name. I’ll say the first one that comes to mind. Brian Beatty. Because he’s like my double, only bigger, and if you put my head hair on my face.”

Where were you born?
“Seattle, Washington. Ballard. Well, Fremont. Belmont.”

What neighborhood do you live in now?
“Midway in St. Paul, represent. Soon to be known as ‘Little Mekong.’“

What’s your ride? Car? Bike? Public transportation?
“All of the above.”

What’s the best way for someone to start a conversation with you?
“Honestly, I’m a sucker for human beings, so it’s not hard. You could say almost anything and I’d be hooked. May I recommend not something like, ‘Hey, wanna bang our whole band?’ You’re gonna have to butter me up with some fun facts about Australopiths before I bang your whole band.”