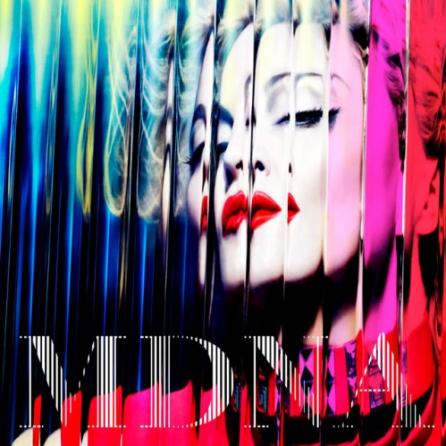 @MarcusMichalik: Madonna is pushing overt middle-aged female sexuality in a culture that expects women her age to shrivel up and die. I find this significant.

Me too. The women-in-comedy discussions of 2011, if nothing else, revealed that there’s still a yawning gender gap in professional comedy—as 2012 begins with the 53-year-old Madonna taking center stage at the Super Bowl and embarking on a national tour, this might be the year to look at the gender gap in 50+ entertainers. Actresses have long complained that the good roles for them disappear with frightening speed once they hit middle age…is that true for popular musicians as well?

It’s a question that’s worth asking, and there’s no better person to ask it than Madonna, a pioneering performer in a field where the fetishization of youth—particularly for women—is so pronounced that Madonna faced her first ageism while recording her 1983 debut album. The vocal tracks on Madonna were sped up so that the singer would sound more girlish: “Like a Virgin,” as it were. How old was Madonna at the time? A positively ancient 24.

@MarcusMichalik: “Make of that what you will, but for better for for worse, she’s undeniably changed the perception of sex in mass culture. Still doing it.”

Also true. There were sexy female singers before Madonna, but none who so forthrightly took center stage with an unapologetic expression of their right to define and flaunt their own sexuality—certainly none who reached the soaring levels of superstardom that Madonna quickly did. If her sexiness sometimes veered into near-camp or self-parody (remember the toe-sucking in her book Sex, or the decidedly unsexy panting of the amelodic “Justify My Love”?), well, that was her prerogative.

I’ve always been fascinated with late-career artists. What do you do when you’ve already done what mass culture has decided God put you on earth to do? The situation Madonna finds herself in shows how relatively easy it’s been for performers like Bob Dylan and Neil Young: Dylan may never write another “Like a Rolling Stone,” but he first gained stardom playing acoustic folk songs, which is what you might call a lifetime sport. Madonna rose to fame as an athletic sex symbol, and that’s a show it’s not as easy to take on the unplugged circuit.

Precisely because Madonna broke the mold when she was young, there’s no template for how she might conduct herself as she begins the AARP-eligible phase of her career. The performer who comes most immediately to mind as a model is Tina Turner, who’s strutted into her 70s with the same great gams and molten sexuality she’s been dripping for the past half-century. Senior sexuality still often gets played for a joke (put your dignity back on, Betty White), but when Tina takes the mic, no one’s laughing. And she probably doesn’t even do yoga.

Maybe there weren’t quite a million, but there were plenty, including one punning on the line Madonna borrowed from LMFAO: “I’m sixty and I know it.” Damn right.