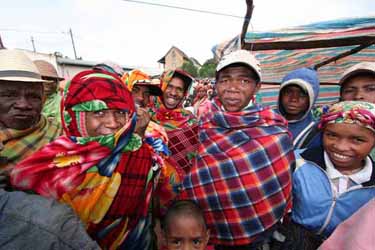 Villagers in Alakamisy, Madagascar, pose for Pat Connolly. The St. Anthony Park resident went to Madagascar as a volunteer with Habitat for Humanity. He also introduced photography to local children.

Shortly before leaving for a trip to Madagascar last spring as a volunteer with Habitat for Humanity, Pat Connolly went to a movie: “Born into Brothels: Calcutta’s Red Light Kids.” The film inspired him to do something during his upcoming trip to help him experience it through eyes other than his own.

The documentary is a chronicle of two filmmakers’ experience in Calcutta’s red-light district, where they taught photography to the children of prostitutes. Connolly had already planned to bring his own digital camera to Madagascar. He has traveled extensively and taken thousands of photos.

In preparation for this trip, Connolly added 50 disposable cameras to his suitcase. His idea was simple: Give the cameras to the local children and ask them to take pictures of things that are important to them.

The results of his experiences in the village of Alakamisy, Madagascar, will be part of an exhibit entitled Madagascar: Digital and Disposable, which opens Jan. 8 at St. Matthew’s Episcopal Church Undercroft Gallery.

Connolly, a St. Anthony Park resident, works as a real estate developer and teaches about affordable housing at the University of Minnesota. He has traveled to over 20 countries. Many of his trips combine his interest in housing with cultural exchange and give him an opportunity to take photographs.

He describes his first trip with Habitat for Humanity to Papua, New Guinea, as “life changing.” He found himself living for two weeks in a remote jungle with no running water or electricity. He joined villagers in constructing houses with tin roofs and wooden floors set up on six-foot stilts. “It was a complete shock to my system, but a gorgeous shock to the system.” he says.

After returning to Minnesota, Connolly felt like he was on “a natural high” for months. He says he acquired a new view of his own life—his more-than-spacious house and the constant availability of food. The New Guinea experience made him realize “how easy we have it” and left him anxious to travel with Habitat for Humanity again.

Madagascar is an island nation off the east coast of Africa. Connolly traveled to Alakamisy, a village of several thousand people. Habitat for Humanity in Madagascar focuses on the Malagasy principal of “fihavanana,” which means “the ties that bind communities together.”

Connolly joined members of the village community, who help build one another’s homes. The two houses he helped with were built with local materials. Besides rice farming, an important village industry is harvesting clay to make bricks and tiles used in construction.

Connolly stayed with a local family that included two parents, the younger of their eleven children and various extended family members. He spent the evenings by lantern and candlelight with his Malagasy “brother,” 16-year-old Marjori. Together they would talk and write, communicating in a patchwork of French, Malagasy and English.

Connolly received an invitation to create a one-person show at the Undercroft Gallery after winning the Best in Show award for one of his photos (from a trip to Cuba) at last spring’s Community Art Show. The new exhibit will feature about 35 of his own photos, culled from 1200 he took while in Madagascar, and about 40 of the children’s photos.

The young photographers are boys and girls ranging in age from 5-16. After they received their cameras, “Exactly what I hoped would happen, happened,” says Connolly. While he was busy building houses and making visits with the Habitat for Humanity group, the children captured the behind-the-scenes aspects of village life.

Connolly didn’t get to view the photos until he returned to Minnesota and had the film developed, which was “like opening 50 Christmas presents.” He kept the negatives and mailed the prints back to the village.

Per Connolly’s instructions, the first photo on each camera was one of the photographer. Then there were pictures of animals: goats, turkeys, cows and dogs. Pictures of family members and friends. Pictures of flowers and plants. Pictures from the marketplace.

Connolly tried to select photos for the exhibit that convey the gentle and generous spirit and sense of humor he found in the community, the simplicity of their material life and the importance of family and community.