“I was tired of seeing our youth in the community hopeless, lost without leadership and fatherless.” That could be just about anyone talking about conditions that have gone on in Black communities for what by now feels to many of us like an eternity. It could be just about anyone who gave up hope and walked away, if not finding a way to leave the community then just turning off mentally and emotionally, no longer caring.

Instead, exactly the opposite, it’s Minneapolis MAD DADS CEO and President V.J. Smith, explaining why he rolled up his sleeves and stepped to and, in October of 1998, established the Minneapolis Chapter of Men Against Destruction-Defending Against Drugs and Social-Disorder, Inc. (MAD DADS). 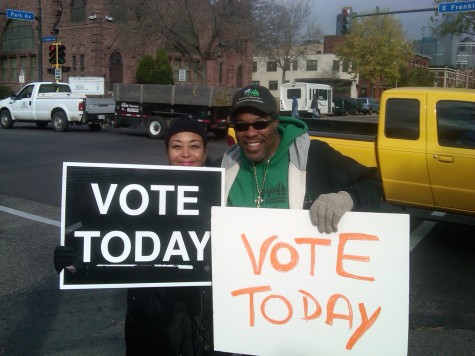 A mere glimpse at statistics exposes the need for Minneapolis MAD DADS. In 2001, African American males were 32 percent of all prison inmates in Minnesota with 25 percent of all arrests in the state occurring in Minneapolis. Minnesota’s arrest and incarceration rates of Black men and adolescent males have long been disproportionate to such rates of that same demographic in other major cities.

In 1989, the National Headquarters and founding chapter of MAD DADS began in Omaha, Nebraska (now moved to Alexandria, Virginia) with 18 men. Since then, the activist community organization has strengthened to number more than 75,000 men, women and children with 60-plus chapters in 17 states.

With the passing in September of national president and co-founder Eddie Staton, whose veritable mantra was “You can’t lose sight of the mission,” V.J. Smith was selected to succeed him.  It probably surprised very few who know Smith’s work, both with MAD DADS and outside the organization, as an advocate for positive change to empower the community.

A long list of civic acknowledgements bestowed on him includes: the 1999 National Crime Prevention Council Award of Excellence; 2001 National MAD DADS of the Year Award; and, presented by Timothy J. Dolan, Chief of the Minneapolis Police Department, 2009 Chief’s Award of Merit to MAD DADS — C.O.P.S. Program in gratitude for Outstanding Contribution to Law Enforcement and the People We Serve.

Smith reflects on the impact he has seen MAD DADS make on Minneapolis communities. “Since we have started, we have brought fathers back to into their homes. We service over 5,000 individuals a year through crisis, grief, trauma, prisons. We have had a major impact on our youth as well, working with them through the hardships and through life-impacting moments.”

On Minneapolis MAD DADS’ website (www.minneapolismaddads.org), you get a look at Smith’s personal inspiration. His bio reads in part, “Abandoned at the age of nine years old by his parents, he was placed in foster care where he eventually ran away and became involved with the drug trade. After an arrest in the early 1980s, he decided he had to straighten out his life.

“Since then, he has been promoting hope and supporting communities throughout north and south Minneapolis, Brooklyn Center and Brooklyn Park and St. Paul, Minnesota. He is a leader in his community by promoting hope and building civic bonds with the help of concerned moms and dads.”

Rae Williams, administrative assistant to Smith, does program management, coordinates special events, and is a member of the outreach team that, among other things, participated this late summer and early fall in The Amen Corner, an outdoor, open mic forum sponsored by Ventura Village Neighborhood Organization. It dovetailed with a Minneapolis Police Department initiative to reclaim South Minneapolis’ Peavey Park from marauding drug dealers.

“There’s no better place to be,” she says, “than amongst likeminded people who are blessed with the skills to save lives. Saving lives and enhancing our community [are] the two most powerful attributes MAD DADS are equipped with.”

Smith is quite satisfied with his MAD DADS involvement in The Amen Corner, stating, “[It] has been a true blessing as well as a blessed opportunity to have a venue of such magnitude that allows the participants as well as the community to show appreciation for the work that we do. Alongside the opportunity to reduce crime in [an] area that was infested with hate and crime.

“We the Minneapolis MAD DADS have had a major impact in that area. It is now safer, friendlier, and a stronger community,” Smith says.

At present, Minneapolis MAD DADS has to do double duty in order to serve both of the Twin Cities. “We don’t have a St. Paul chapter at this time, although we do work in the St. Paul communities as well as other surrounding areas.” That, however, is something V.J. Smith expects to see change: “We are looking to expand to St. Paul in the very near future.”